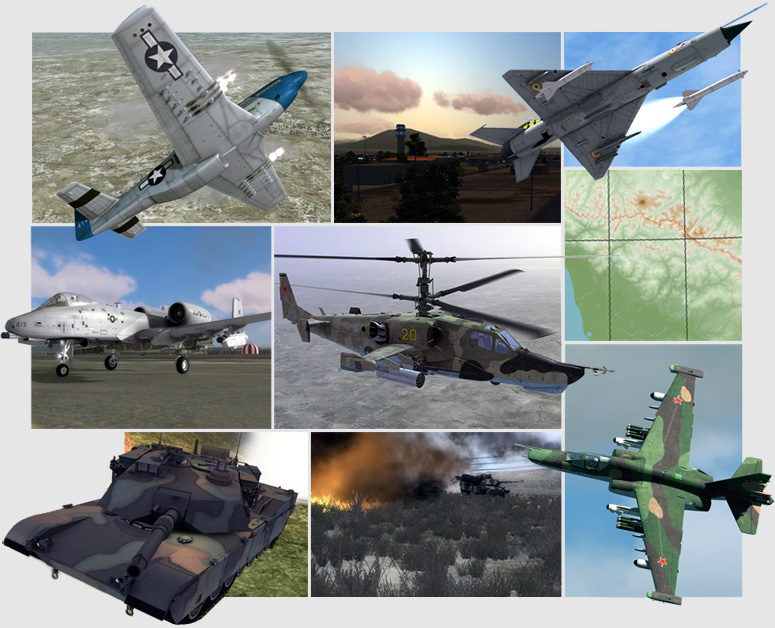 We recently put together a bunch of questions about the DCS Series, then sent them off to Producer Matt “Wags” Wagner for the latest available information. Thanks Matt for taking time to answer!

Q: Will DCS World modules (is it fair to call them DLC?) be available on Steam or the download through Steam?

Matt: That is our intent, but contrary to what most gamers think, just because a company pitches Valve to sell a title on Steam doesn’t mean it will happen. More and more so, it is getting difficult to get Steam to pick up titles by small developers, like Eagle Dynamics. As such, we are also working with other digital distributors like GameFly and Origin. Of course, all our titles are for sale on our web site, and this is our preferred means of sale.

Q: Is there any way to manage modules (i.e. organize them, for instance, by time period)?

Matt: When there comes a time when we have a large number of modules, that may be something we consider. However, we are not at that point yet. In the meantime, we have started our “Flying Legends” series that was kicked off by DCS: P-51D Mustang.

Matt: This is something currently in development and we have been taking input from outside parties. It has taken longer than we had wished, but hope the end result will be worth the wait.

Q: Will updates to DCS World break interplayability with previous versions of DCS World? Other modules?

Matt: No, that would defeat the primary purpose of DCS World.

Q: What’s the patching strategy going to be for DCS World and the modules? Will we update the “core” in one patch and then the modules in other patches? Will modules always be compatible?

Matt: Correct, DCS World (core) will be updated as there are changes to all items not specific to a module. Each module in turn will be updated as changes are required. We are currently working on an auto-updater to make this much more smooth for the end users.

Matt: Yes, the serial codes originally purchased will work for later module versions of the titles for A-10C and Black Shark 2.

Q: When is a DCS World SDK going to be publicly available?

Matt: At this time we have no plans for a public SDK. We work with qualified 3rd parties on an individual basis.

Matt: It is something we have discussed internally, but there are other items we would first need to address before moving forward. The most important being a higher level of detail at eye-level.

Matt: We have no such plans at this time.

Q: Will it include the ability for land / terrain modules as well as aircraft?

Matt: Yes, the first of which will be the long-awaited Nevada terrain.

Q: Will players be able to see other players custom skins without installing those skins onto their machine?

Matt: No. It would need to be done with manual texture file swapping.

Matt: In the near term we make new versions (not patches) available; this first requires the previous version to be removed, but not deactivated. Later we will be moving to an auto-updater.

Q: Does the vision of DCS World include naval combat?

Q: With the announcement of third party plane developers, will we see the direction of planes be either “survey” or “study”?

Matt: That will be completely up to the 3rd party developer. We will not dictate that, but we do have quality levels that must be maintained.

Q: Along the same line as the previous question, will it be possible for developers who are aiming at a lower level of fidelity to participate?

Matt: Absolutely. We hardly expect every 3rd party to develop aircraft at the DCS: A-10C level. This also provides a broader range of products for those that don’t want or have time to study a 700 page manual.

Q: Are third party modders going to be held to the quality standards shown by the A-10C?

Matt: Yes, in terms of 3D modeling, textures, animations, audio, 6 DOF cockpit, and mouse interactive controls. It will however be up to them to decide the level of fidelity when it comes to systems modeling and flight dynamics.

Q: Will they have access to a version of the engine? I’m thinking about modeling classified/speculative projects (e.g. the Sh-90 Shturmovik replacement, the PAK-FA, the F-35, the MiG 1.44…)

Matt: Part of our agreement with all 3rd parties is that it is up to them to announce and discuss their products. As such, I cannot comment on unannounced 3rd party projects.

Q: Are there tiers of complexity defined for the third party planes?

Matt: No, we leave that to the developer.

Q: Could we see more complexity in a third party plane than what DCS themselves produce?

Matt: Possibly, but most of the current efforts are at an early stage, and it would be better for those developers to discuss their intentions, than me.

Q: Should we expect all 3rd party planes to interact with the existing DCS environment? In other words, any plane with a tailhook can land on a Russian carrier? Matt, we won’t ask you about US class carriers unless you’d like to volunteer something?

Matt: Yes, any 3rd party title must be compatible within DCS World.

Q: Will the individual aircraft modules, like the beta for the P-51D include any special AI behavior to help with realistic Air Combat Maneuvers i.e. for prop-driven and lower speed combat, or is that part of the base DCS World’s existing AI?

Matt: Yes, the AI for the Mustang includes some unique code for such matters as dogfighting, formation flying, takeoff, and landing.

Matt: We have announced no such products at this time.

Q: Is there an AH-64 A/D in the lineup of future aircraft?

Matt: If, or when, we decide to create such a product, it will be announced at the proper time.

Q: What is the status of the Nevada map?

Matt: After a break of several months, the team is working on it again. What should be kept in mind though, is that while this project started as a 3rd party effort, it had to be completed by Eagle after the 3rd party group ceased to be. When this happened, we basically restarted the entire project from scratch such that it would meet our quality standards and take advantage of our new Image Generator (IG). What people first saw in the A-10C beta is a completely different product now. We hope to have the map released before the end of the year.

Q: Sorry, but we’re about “Georgia-ed” out. Any hope for more terrain soon?

Q: Are there any plans for in-house add-on theaters beyond Nevada? DCS World implies an area larger than the Black Sea region.

Matt: Yes, but we are not discussing them at this time. We’d like to finish Nevada first.

Q: Is there a PDF and / or video tutorials?

Matt: The DCS: Combined Arms manual is included with the open beta. Once we are close to final, I will be making a Producer’s Note tutorial.

Q: Is there any possibility of incorporating control over surface-to-air missile batteries? I know that the developer of the Sam Simulatorhas expressed a willingness to migrate their excellent work into new engines.

Q: With the DCS: P-51D Mustang the price point comparable to a AA full title, do you think that specialist sims with smaller markets need to rethink the free and inexpensive (sub $30) attitude to prices to survive?

Q: What’s the situation with DCS World and Flaming Cliffs 3 (FC3)? If FC3 is a module, will this still be under the existing Ubisoft brand or a completely separate title?

Matt: FC3 will be a module of DCS World, but as a module (not a standalone product), it will be published as a The Fighter Collection (TFC) product. Because FC3 is still an approved unofficial add-on product for Lock On, FC3 will require Lock On: Modern Air Combat to be installed.

Q: Want to talk more about Flaming Cliffs 3 yet?

Matt: With Combined Arms and P-51D in beta, we hope to be moving more resources on to FC3 soon. Once that happens, and we are more clear about the features, we’ll be able to talk more about it then. A bit too early yet.