As I mentioned earlier, the game looks decent on medium graphics settings while it looks that much better on the higher settings. Looking through this screenshots thread and the Screenshots and Video Forum you’ll see posted images by folks with top-of-the-line systems that demonstrate CoD’s flight sim graphics. There has been some criticism of the games graphics. While some points are legitimate, the game looks outstanding. Just not perfect.

A complaint I have is the color palette of the game. It seems a little too bright, somewhat IL-2ish in its color scheme. Part of the problem, in my opinion, is that most of the missions I have flown have been done in sunny weather with little to no cloud cover. While fine for the South Pacific or even parts of southern Europe, it seems out-of-place in England’s coastal areas and over the English Channel. Even during the summer, Britain is not exactly the French Riviera, and clouds, mist and haze should have prominence in the game.

Still, the game looks as good as pretty much anything else out there. Seems to me Rise of Flight probably has better terrain graphics and a nicer color palette. CoD isn’t that far off, and hopefully the update work-in-progress will resolve the issues I’m seeing. Some players have stated that games like Wings of Prey have better terrain graphics and in some respects it does, but CoD’s map is huge compared toWings of Prey, so comparisons are somewhat unfair. The final determinant for me is the ability of the terrain to add to the enjoyment of the game. CoD does this and ultimately that is enough to make me happy. Clouds and water look as good as any current simulation. There is little that I can complain about as far as the terrain and water graphics.

The aircraft graphics are among the best I have seen in any flight simulation. While not picture perfect, there isn’t a game in my opinion that matches IL-2 Sturmovik: Cliffs of Dover in the rendering of the combat aircraft of WWII. It is simply beautiful watching these aircraft and the attention to detail is outstanding. 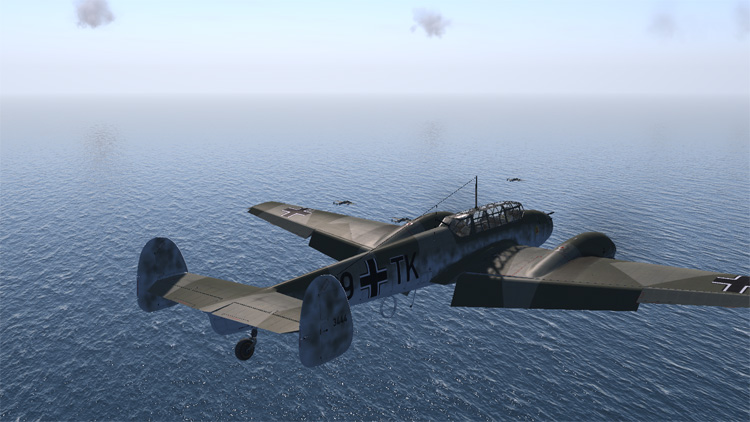 The detail continues in the cockpits of these aircraft where the level of detail is beyond impressive — it is amazing. The most critical players of CoD still agree the cockpits bring a new level to the detail. Some of the aircraft rendered for FSX might rival it, but most of those aircraft are separate purchases and many for the same price as IL-2 Sturmovik: Cliffs of Dover. 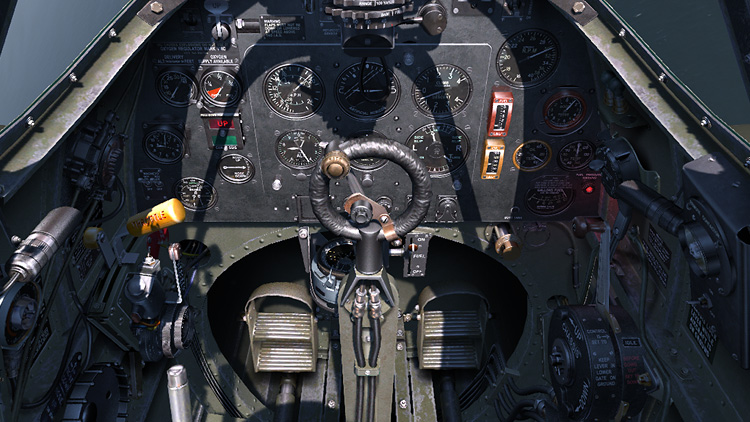 All three plane sets British, German and Italian look equally impressive. Damage effects are rendered well and are based upon where you are hit and where the enemy aircraft are hit. Sometimes it is cool just firing up the autopilot just to cycle through the aircraft just to watch the different damage areas on the various planes. I think fire effects are a little bit overdone, but smoke effects look just right.

There are several little touches in the game that show that there was some extra effort put into this titles planes. If you look at the Hurricane before you fire off a round, you will see the fabric covering that was placed over the 8 Browning machine guns and after firing you will see the holes that fired through the covering.

Fields and equipment that can be placed around them are well done, detailed and add a realistic feel to the airfields. Cities are rendered nicely and many (but not all unfortunately) of the landmarks in London can be overflown. 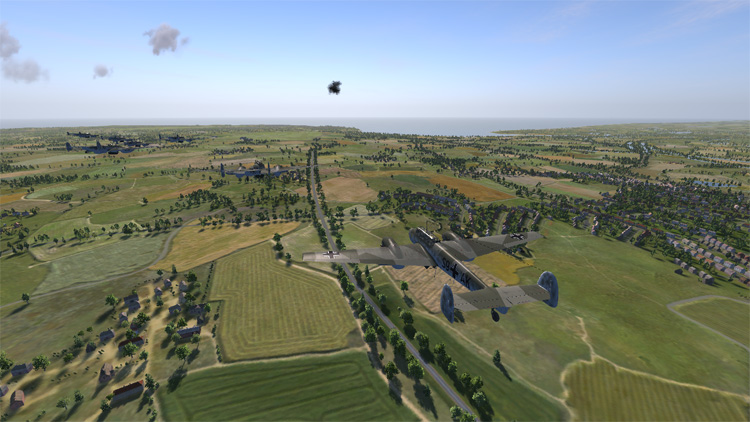 Graphics problems include issues with anti-aliasing. It is still not working properly in the game and has been a bone of contention for a lot of people for quite some time. A modern designed game shouldn’t have a problem with anti-aliasing. Another problem plaguing CoD is stuttering and freezing. Both seem to be are commonplace with many players. Both are better after the first couple of patch releases by 1C, but the title has a way to go yet in solving both problems.

Some of this is related to the curious anti-epilepsy filter that with CoD. Depending on who you you listen to, and what you read, it was required by a) 1C, or b) Ubisoft, or c) both. I am not sure how many people with epilepsy actually play video games, but I have heard of no other game that shipped with a filter. Originally it was hard-coded but after a large number of complaints the filter has become optional and can be selected / deselected in the Video Options panel.

Overall I am happy with the graphics, but then again I haven’t had some of the problems other players have encountered.

Sounds are okay, not bad actually, but there have been complaints about things like the Bf109 not really sounding like a true DB 601 equipped Messerschmitt. Each aircraft does sound different, but the sounds are relatively muted, and sound very similar to the previousIL-2 Series. There is reportedly some huge updates to the audio in the next patch / update. The sounds don’t take away from the game, but they don’t add anything either. The music is okay, but again, not great. I don’t comment much on music in games unless it is either horrible or inspiring. CoD’s music is neither.

I have some serious problems with the single mission and campaign setup in IL-2 Sturmovik: Cliffs of Dover.

They aren’t the worst I have seen in flight simulations, but both could be much better. Plus there are bugs. A lot of them. The stutter bug is a hard one to deal with. I understand that not all systems will run the game well and understand that it is hard getting all machines, with different drivers and different hardware setups to run the game. Still, there are some really strange bugs, like floating ground objects and aircraft crashing for no reason. Be careful when and where you hit the autopilot, you may find yourself flying through trees (which do not have contact detection). I’ve seen shadows flicker in and out, and intermittent crashing has plagued me. Others have had performance issues even on top end machines. Fit and finish are not the norm with this game. If CoD is a Bentley, it is one made in a 1978 Chrysler plant. There are just so many bugs. Some minor, some serious, and some outright stupid.

Cliffs of Dover ships with several options for the player as far as single and campaign missions.

In addition there is a tutorial campaign where people can get up to snuff flying the venerable De Havilland Tiger Moth, a two-seat biplane trainer similar to the U.S. Stearman trainer. These training missions are a good introduction to the new pilot and will familiarize people with the CoD flight models. The training section is a must for newbie fliers. The Tiger Moth is docile and forgiving for new fliers, and a difficult plane to break. 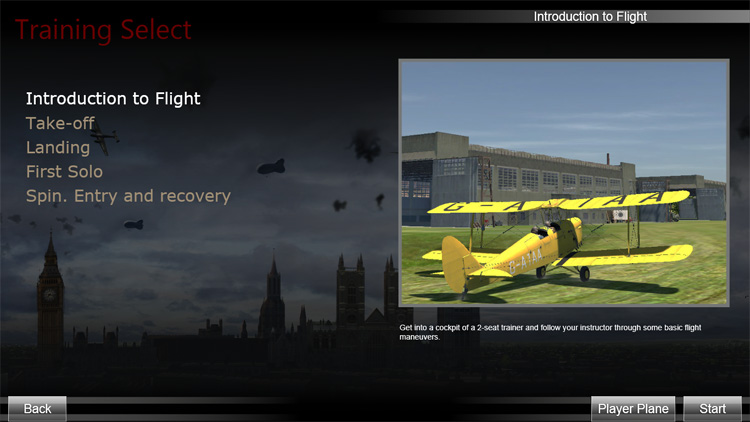 Single missions can be flown via the quick mission builder or by a series of stock missions that come with the game. Single missions are relatively few and far between to be honest. When you consider the number of aircraft that ship with this game you would expect plenty of opportunities to fly missions using these aircraft, especially when you consider this is a game that covers the BATTLE OF BRITAIN. There are the obligatory London attack, shipping attack and a Chain Home radar attack but there are only one of each. No historic airfield attacks. No Eagle Day. No defense of London. The fact is, only five real missions shipped with the game. 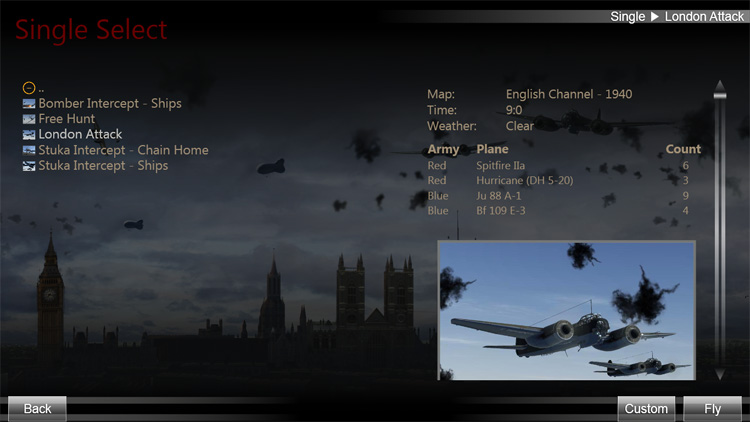 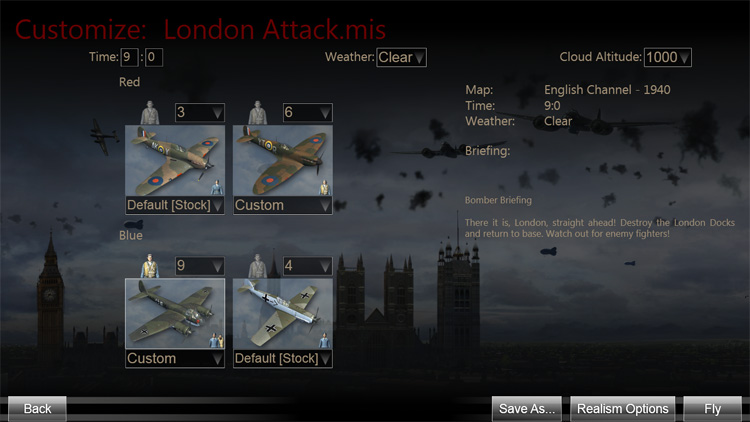 The quick mission builder is actually one of the bright spots of CoD. There are a variety of setups that you can choose and then you can adjust the parameters such as what you fly and what you fly against in the setup screen. It is different from the IL-2 Series quick mission builder and takes a little getting used to, but once you figure it out, you can play an almost unlimited mission selection. The setups include anti-shipping, ground attack, air-to-air (both with and without an advantage) and bomber intercept missions. You have the option to jump into any of the aircraft in these missions as long as they are flyable. 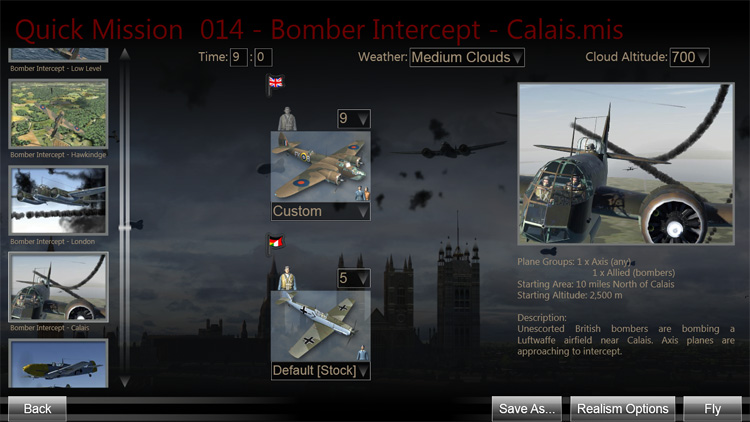 The game features extensive configuration options, allowing you to tune your settings to get a comfortable balance between realism and a less simulator like experience. One setting of note is the “Anthromorphic Control” that actually attempts to model what it’s like to have just one pair of hands — it prohibits changing controls or switches quicker than a real life pilot could do. It’s an interesting idea that seems frustrating so far in practice. 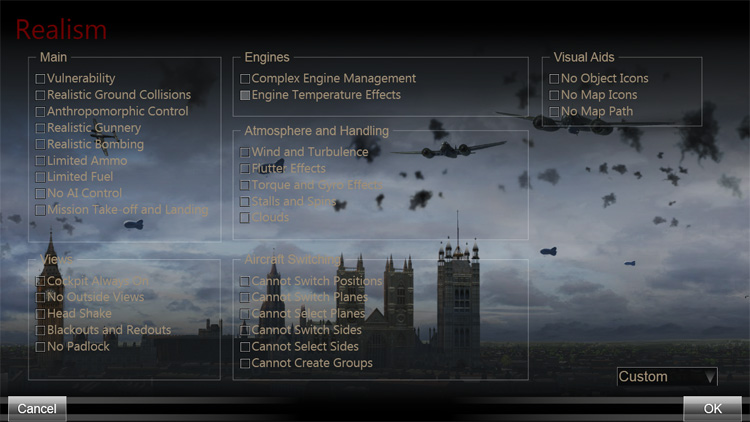