Or, A Case Study on Why Kicking Sleeping Dogs
Usually Results in Getting Your Arse Bit…

In 2002, the last “flight-themed” simulation functioning under the auspices of the Jane’s Information Group was released, titled Jane’s Attack Squadron. I use quotation marks on “flight-themed” because it had very little in common with actual flight. During the same year, the Bush Administration pushed the No Child Left Behind initiative through Congress, thus evening public education out to the lowest common denominator on a federal level. Nearly ten years later, a new “flight-themed” game is released bearing the mighty name of Jane’s, developed by an Australian outfit called Trickstar Games and published by Evolved.

I firmly believe there is link between these two events.

JASF arrived on PC-DVD format after the ship date was pushed back three times by GameStop. It should have been held back longer. At first, I thought they’d shipped a broken DVD (anyone remember the 2nd disc Lock-On: Gold issue with Evolved Games?) because it was taking my middling-fast machine too long to spin it up. You know how when you insert a DVD, it wants to recognize the contents? Well, this operation was timing out Windows Explorer and finally after the third attempt it finished and I could see why. The setup.exe file was 913MB in size. They’d packed literally everything into the setup executable. Hint to Trickstar: this is inefficient.

The terrain map of this former Soviet republic of Insert-funny-word-istan is 256km by 256km in size, roughly a fourth of the size of a Strike Fighters 2 terrain map. The mission also places boundaries around you like HAWX generally did. Fly up to a certain point on the map during a mission, and it starts screaming at you to turn around. It is far prettier than the average Strike Fighters 2 terrain, but that’s like saying Elle McPherson is more attractive than Rosie O’Donnell. It wouldn’t take much effort. 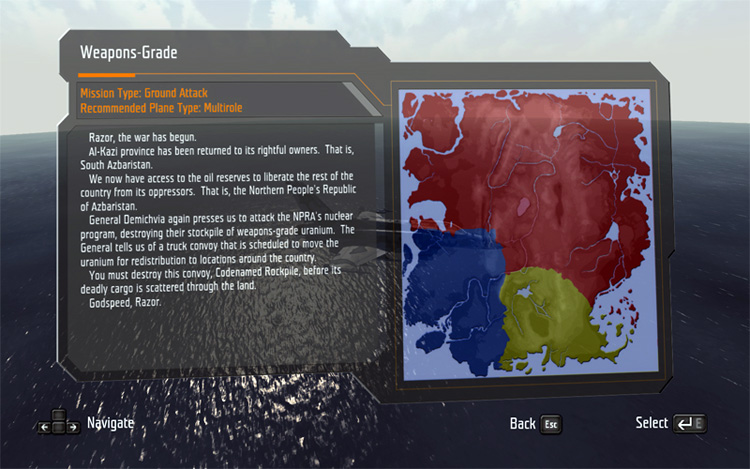 As attractive as the surroundings are, the aircraft went in the exact opposite direction. Not only are some of them in the most garishly ugly liveries possible. For example, a purple-camo F-111G? Really? 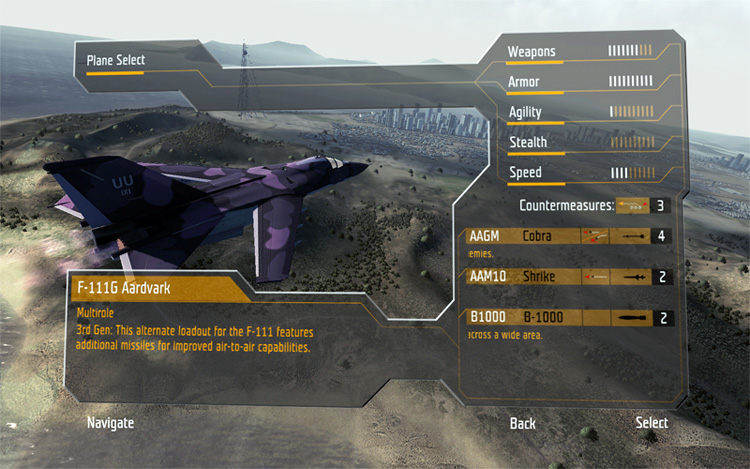 Best way to describe it… hit or miss. Mostly miss. The engine noises sound like someone recorded a Dyson vacuum. The missile launches sound like a cat spitting at a particularly hated child. The voice acting is wooden and appears to be recorded by what sounds like the community theater volunteers of Fresno, California trying to do an on-stage adaptation of Doctor Zhivago, then ostensibly re-imagined by an unusually ambitious fourth-grader. But, at least someone brought cut scenes back to a Jane’s title.

Here’s where it gets really interesting.

The style of gameplay is slightly more compelling than say, HAWX, but in the way that MMA Tapout is slightly more compelling television than Jersey Shore. They both aren’t very good, but one rises slightly above the other. The style of gameplay is very reminiscent of games like Dogfight: Battle of the Pacific, sheer arcade action. For example, you have a health indicator bar. Does that tells you something?

But, you also have a “radar” and a “moving map display”, so there are some nods to how an aircraft actually functions in real life. Weapons behavior is even interesting at times, as some of the AGMs hug the ground and perform a cool little “pop-up” maneuver on a target, but bomb impact points seem to defy most Newtonian physics I’ve studied. The loadouts looked interesting at first (this game marks the first time I’ve ever seen a cluster munition named “the Pinata”) in that you really carry one weapon per available pylon, so I figured it might be a game that threw realistic numbers of enemies at you. Nope. Your weapons “reload” every so often, so in truth, you have unlimited ammo and you are apparently the only pilot in this tiny little air force that can afford 5th-generation planes. That’s a hell of a lot of oil revenue. 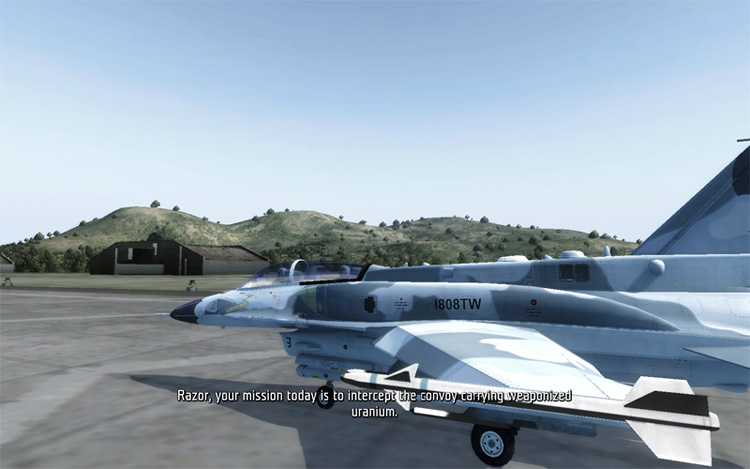 Flight models are predictably simplistic and easy to master, but you will spend most of your time above Mach 1 in afterburner. Why? Otherwise, you wouldn’t see those cool particle effects they paid so much for and the game yells at you to hurry your arse up and finish the mission. Enemy AI is limp and uninterested in engaging in any kind of avoidance maneuvering that I could determine, they simply fly in race track patterns until they can point themselves at you and fire. The only challenge comes in the sheer volume of enemies to shoot and destroy.

The biggest disjoint is the lack of a cockpit view. There is a kinda HUD-only view and it’s infinitely preferable to the eternal arcade standard “chase plane” view, but the point of reference feels about 10 feet above the cockpit of your aircraft, so it’s like you’re on a step ladder. It works, but not very well. I should be able to pan my view and see my wings and tail planes behind me at the proper angle. 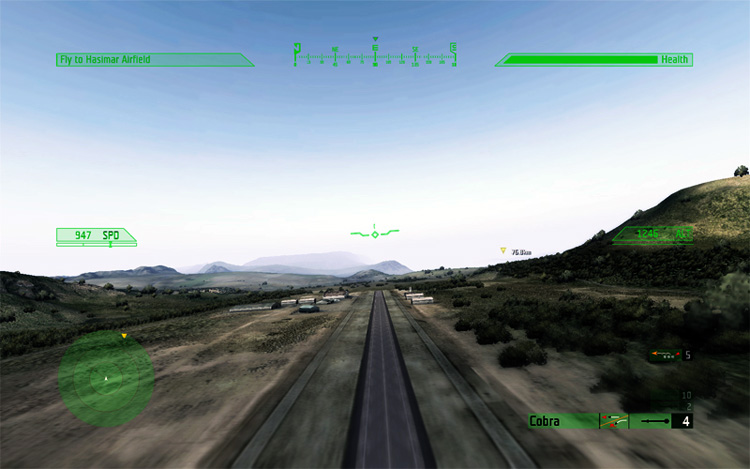 Anyone ever been to a concert that’s part of a “comeback tour”? Some aging rock star or group, with delusions of consequence goes out on a “reunion tour” with bandmates to recapture their former glory… or at least see what those groupies they nailed years ago have aged into. I’ve been to a couple concerts like that. The fans have more gray than color, and if their hair is colored, it’s due to chemical-assistance. When the act comes out on stage and you wonder “What kind of freakish DNA are these people made of that permits them to continue living?” Or, “How much Botox did THAT take? Every time they smile, their arms raise up.”

Some performers manage these comebacks well, like Fleetwood Mac or Rod Stewart. Others are more like Aerosmith or Van Halen, staggering out on stage in all-too-tight-fitting clothing, pills falling out of their pockets (some or most of it is to solve E.D.), whiskey bottle in one hand, microphone in the other hand, screaming, “HELLO, CLEVELAND!!!!” ….and they’re in Charlotte.

The “return” of the Jane’s label should have been avoided completely rather than be associated with a game like this one. Jane’s was once a powerhouse, delivering titles like Longbow, F-15, and the ne plus ultra of simulations, F/A-18. It’s best that we have those memories to look back on, rather than try to recapture them. Like the ones we had in high school, going to the Texxas Jam with a girl wearing a pleather miniskirt and tube top. Remember?

It would have been a good idea for Jane’s to have avoided being associated with this game, because in the event that they did try to make something more challenging and more like their titles of yesteryear, no one will be interested because all they’ll remember is this one. Kinda like how no one wants to buy a new Metallica album because they all remember St. Anger.

The Evolution of Strike Fighters: Project One Page 11