Fly Me to the Moon

…and let me play among the stars.

Lunar Flight in its basic structure is reminiscent of the classic arcade games, in the sense that emphasis is not put on accurate details of the LEM’s computers and systems, because you won’t find a virtual version of the guidance system that threw up the famous 1201 and 1202 alarms in the Apollo 11 mission prompting Neil Armstrong to take manual control and land the Eagle by his piloting skill alone.
While the graphics are indeed modern and very nice to behold; I was in for a bit of an awakening when it came to controlling the LEM, even when I had my axis configured properly.

Considering the challenge of flying, there is absolutely nothing arcade about Lunar Flight and this it what makes Lunar Flight a bit if a gem, and quite addictive too!

The flight characteristics and physics are challenging and not at all arcade, as you would perhaps wrongly conclude, before actually flying it.

Apart from the obvious main engine controls, you also have to expertly and precisely judge the amount of roll, yaw and tilt vectors necessary to steer your craft; that’s three dimensions plus the interaction of all three at the same time, and from experience, let me tell you that I quickly suffer from brain overload and a mental incapacity to figure out how to recover from the unfathomable maneuvers I get my spacecraft into. Exactly how do you recover from an asymmetric spin along the longitudinal axis while at the same time toppling end-over-end, heading towards a crash on the surface? 🙂 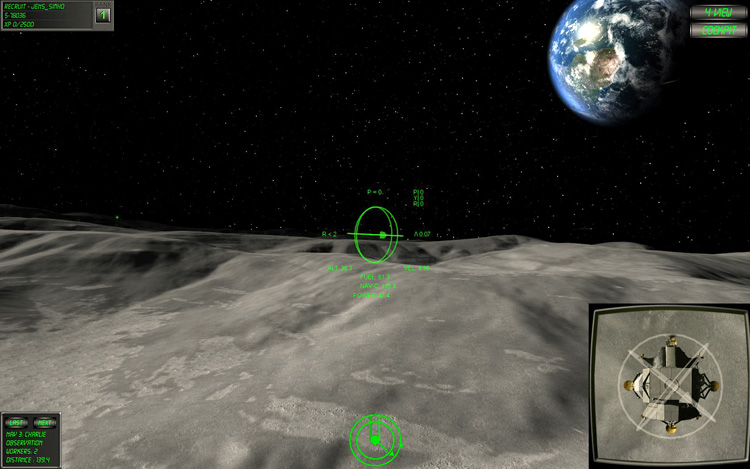 The things you can do besides flying, are earning achievements while tracking your career progressing on the leader-board, flying predefined missions and time trials. Don’t try running older builds, you won’t be able to log in. This is good as it ensures integrity in the leader-boards.

Flying the time trials seem to be a good way of practicing your maneuvers before going on real missions.

You earn money by moving cargo between different bases on the surface of the moon and you have expenditure when paying for fuel and damages you might inflict upon your lander.

The quad display whereby you get four views in one screen is a unique way of providing you with information that will enhance your situational awareness. For maximizing your earning of experience points, or XP — the full screen cockpit view is the view that will earn you the most XP.

Gameplay will receive extra features so you can improve the LEM’s performance, by buying upgrades for it, once your in-game XP reach a certain level.

Also, additional and harder maps will be part of the final game, again limited by your rank and requiring a minimum XP for you to access the content.

This upgrade system will be part of the final game, and word from the developer is that it will hopefully be in place soon.

Currently as of version 0.995, two maps with several missions each are available; one map with a medium difficulty, and one map designated hard difficulty level.

I think I possibly need a map designated easy, and Sean from Shovsoft tells me that such a map is indeed in development.

To aid your navigation you should learn to interpret and use the information available to you correctly. One thing I got wrong in the beginning was to rely on the map, the radar like screen solely, to find my way around the surface of the moon. As it turned out that was a bad idea. I had neglected to realize that the map is static and as soon as you start whizzing around the lunar neighborhood all sense of directions as to where you are on the map is lost.

Instead, the top-down view on your LEM provides indicators with arrows that help you maintain a good and true course and steer towards your objective. 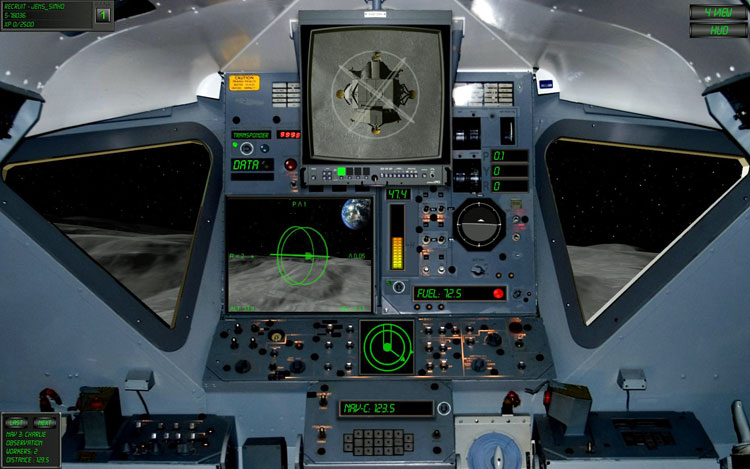 Yes, you can fly from this view too!

The music score and ambient music works very well in supporting and underscoring what happens in the game; building crescendos when you approach a gate in the time trials, or changing from being barely noticeable to announcing musically that something is going critical, like getting dangerously low on fuel. At no time did the music annoy or appear out of place.