Native 6DoF view support, finally! No more bandits hiding behind struts or tail feathers. True 6DoF is only available to NaturalPoint TrackIR controllers. Other controllers will not be able to roll the camera, hardly a serious handicap. Note that view axes are intentionally limited when in the gunsight view.

Leaning to the right and to the left.

The camera position changes when pivoting the view around, reflecting the fact that a real pilot’s view doesn’t pivot around their eyeballs but around their neck, resulting in a small but perceptible change in perspective. 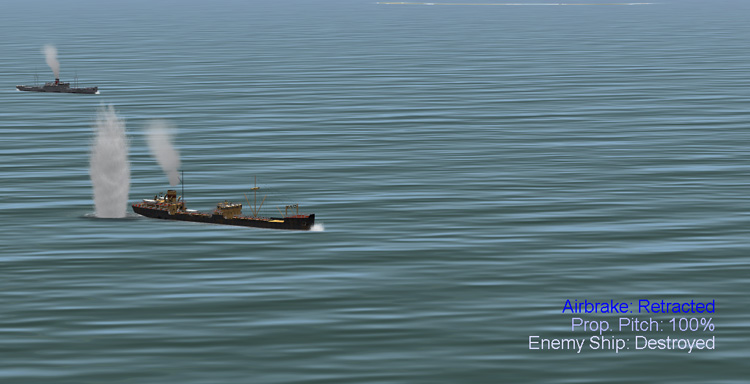 Near hits can now be fatal to ships.

Team Daidalos has given us so much in 4.11m, it’s difficult to catch all of it in a feature. I heartily encourage you to crack open the guide and read through the detailed description of changes and see all the good work Team Daidalos has put into this patch.

As a fan of the IL-2 series, I am looking forward to seeing how all you clever mission designers out there use the new features to create fun and engaging missions. And I just can’t wait to see what else Team Daidalos has in store for the rest of 2012!

Get the patch for standalone and the dedicated server in the SimHQ Downloads section (registration required). Don’t forget to download and install the hotfix as well to fix a CTD error that shipped with the 4.11m patches.