Back to Page 2   Graphics and Sounds The helicopter models are simply exquisite, inside and out, richly detailed from antenna and flush-air inlets to access panels and rivets. The sim does a phenomenal job with clouds, quite possibly the best I’ve ever seen in a flight simulator. The Seattle skyline is just as impressive to see in the sim as it is in real life, except in the sim you can turn the rain off! 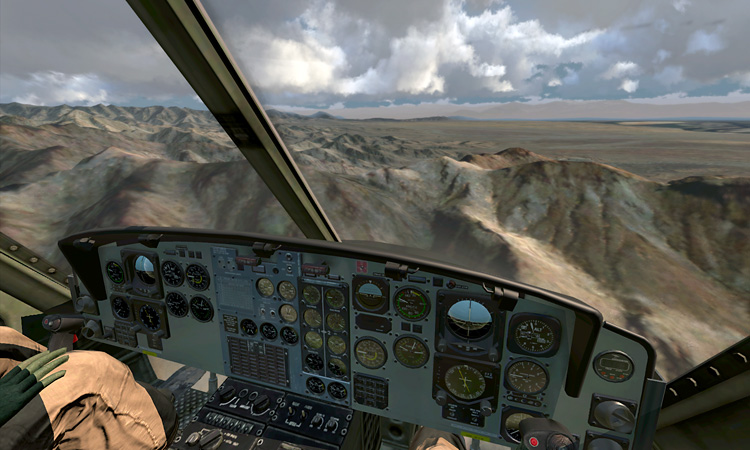 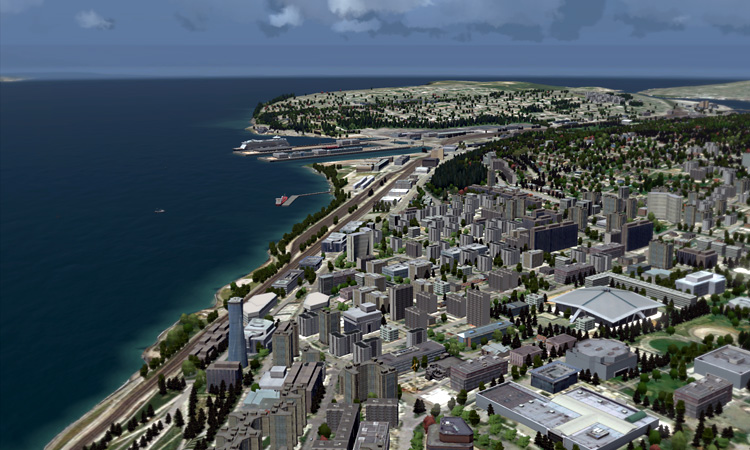 The Seattle area is rendered fairly well, making for believable scenery at altitude, but the lack of detail at places like the airport make it readily apparent that this is more of a broad brush scenery rendition rather than a minutely detailed scenery pack. This is probably an intentional space-saving measure: the install files were 13.6 GB in size with this level of detail! Sounds just don’t seem right to this observer. While the rotor and engine sounds are authentic enough, there is no variation for rotor loading, torque, or airspeed — critical cues to a helo pilot. External sounds are also quite audible inside the cockpit while flying, including aircraft from hundreds of yards away and nearby sea birds. Ambient sounds cut out when receiving radio transmissions, probably to ensure the messages are heard, but it’s an odd effect. It probably would have been better to let the user set the volume settings to get the effect they desired. Helicopters have an iPod in the cockpit and the pilot can choose to play music during flight and even switch genres. I wasn’t thrilled with the music selection but this feature is great during long scenic tours around the Puget Sound area and is better than listening to your two cousins argue about the rules of “I Spy” in the back of the family station wagon. NaturalPoint TrackIR™ When using TrackIR™, the sim pops the camera in and out of specific spots in the cockpit which makes for some disconcerting views. Sitting normally, the cockpit gauges are too far away to read. Slowly lean forward and the view will stick until it suddenly jumps towards the instrument panel at just the wrong distance to easily read the dials or to see outside. Many flight sim games had wonky TrackIR™ behavior that was later ironed out, so I’m hoping we see some improvement to this behavior in future patches. Scalability The sim is heavy on visuals and takes its toll on older machines. Chris needed to significantly reduce the graphics options to get reasonable frame rates on his aging machine, but, even at the reduced settings he was impressed with the graphics, overall. See a video of Take On Helicopters from his machine and judge for yourself. My relatively up-to-date PC did moderately well with most of the eye candy turned on, scoring an average of 41 frames per second in the benchmark challenge mission.