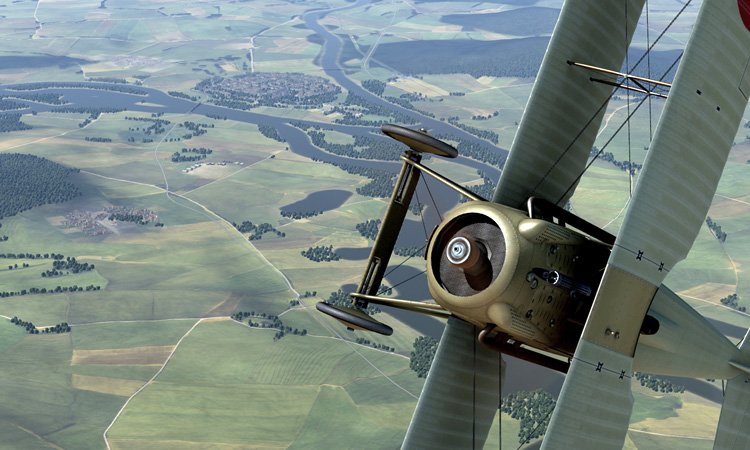 When things happen slowly, we often don’t notice the changes. What is true of gray hairs, is equally true of children growing up. Rise of Flight’s successes have been gradual, with over six upgrades a year. The water has heated up and reached a boil with relatively little notice on the SimHQ articles. However, if we look back at the entire year of 2011, the situation is clearly that of one of the most impressive simulations ever produced reaching the height of its prime. This article is intended to bring our SimHQ readers up-to-speed on Rise of Flight.

Could flying at night be fun? Conventional wisdom says “no, you can’t see”…. but experience says “yes”. Night flying has often been dismissed by both American and Russian developers. For a Canadian, as a member of the Commonwealth (which suffered tremendous casualties and did tremendous damage in the night war of WWII) it is nice to see this “nightly other half of the war” getting some attention. The fact that it is a Russo-American project working on WWI makes it even more satisfying.

The nights of Rise of Flight are quite dark now and dramatic. This affects game play and impacts the player’s direct sensory experience of the world. However, the changes go well beyond this — the AI’s vision is also severely limited by the night. It is now possible to gradually creep up on a bomber, over several minutes, periodically catching its wings when it is illuminated by moonlight.

It you take too long, the gunner might spot you, but typically it is the fighter which fires the first burst…

As tracers fly towards the dark object, it responds. Tracers fly out from the gunner as the muzzle flash illuminates the man in the machine — flickering images of part of the target aeroplane allow for better aiming. In just the same moment, the spark-like hot metal of tracers flies past your attacking fighter… and eventually flames engulf a machine, illuminating it as it tumbles and pieces fly off into the darkness beyond the light of the flames. The effects are truly magnificent.

Struggling home at dawn, you will now see a new atmospheric effect — the morning mist — lining valleys and fields. 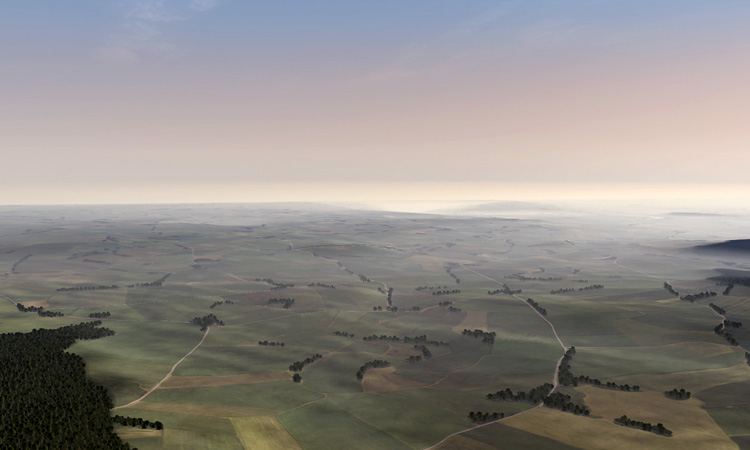 Search lights are added as well. They can illuminate an aircraft for flak and fighters to attack. The AI will quickly notice an illuminated prey. 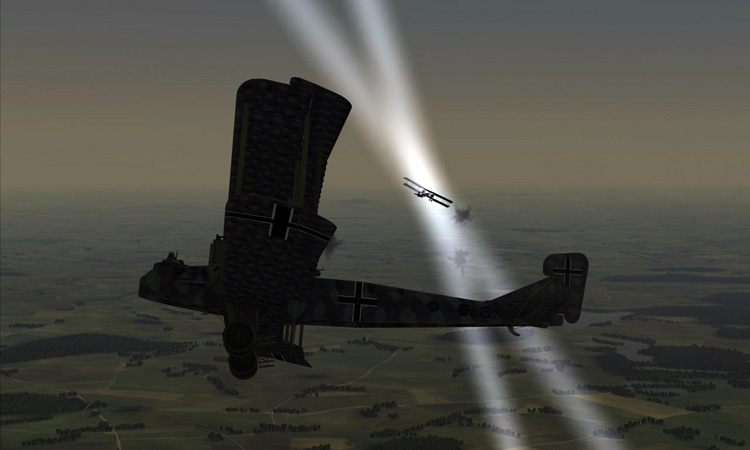 While blinding in a large area around the light itself, one flaw here is that searchlights do not have a persistent effect on night vision. In reality, crew caught in search lights were often vulnerable for several seconds after being blinded, and it could take a couple of minutes before night vision fully returned to optimal levels. For the player, at least, this should be easy to model with HDR settings.

Toward the end of the war, search lights were sometimes carried by night fighters. If the Rise of Flight team ever decides to go through with modeling the F.E.2 (as they have considered in the past), there is a small chance that we might someday even get a chance to use one in flight.

Clouds now block visibility for AI, allowing their use for escapes. Clouds are always lovely in Rise of Flight. 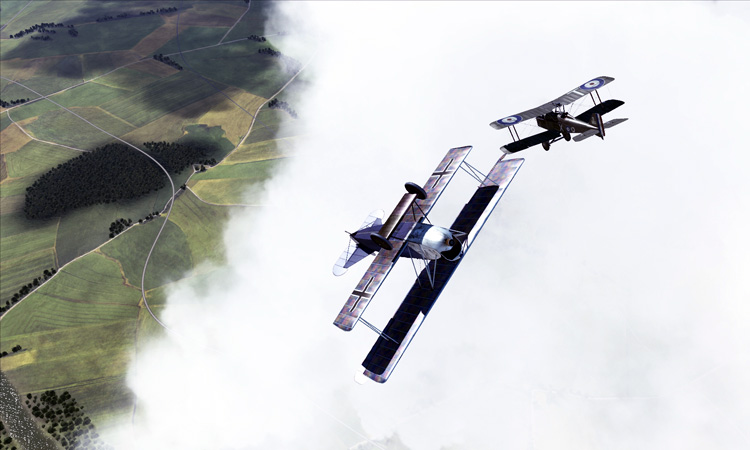 The introduction of field mods allows players to customize their aircraft for a few extra dollars.

The field mods are fairly limited in scope. They don’t provide different variants of the aircraft, but tend to focus on gauges and gun sights. It would be easy to believe that the market for these might well be limited to people who want to provide additional revenue to the developers and / or people who are looking for an “extra margin” in multi-player dogfights. However, some of these displays are incredibly useful: In particular, there is an anemometer (primitive airspeed indicator) for some of the early aircraft (like the N.17) which tended to shed their wings. The gun sights generally provide a freer view (despite being telescopic) and are nice to have on some aircraft, for example, in the S.E.5a (it provides a treat to lure me to a plane I hadn’t taken a liking to) or the Pfalz D.XII (which is a late war bird anyway). 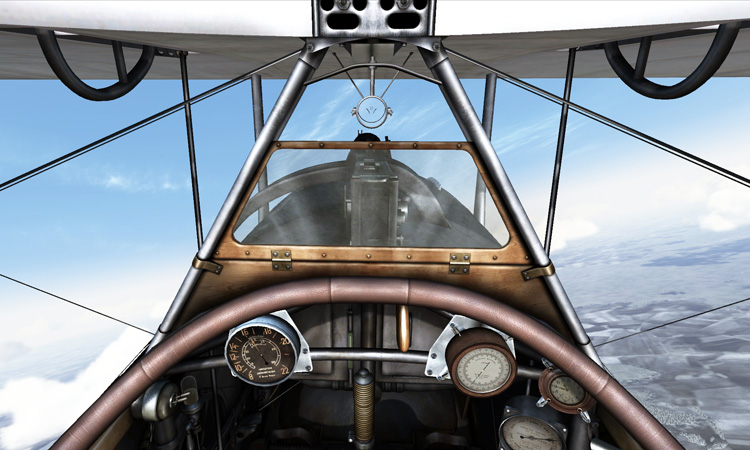 It would be nice to see alternative engine variations (S.E.5), alternative gun mounts (e.g. a Lewis equipped RNAS N.17), flight model changes (lowered CG on the Camel) or airframe modifications (e.g. an extra anti-roll-over wheel for the Gotha). Perhaps someday we’ll see additional field modification packages for some of these aircraft… Well, there is always room for hope. 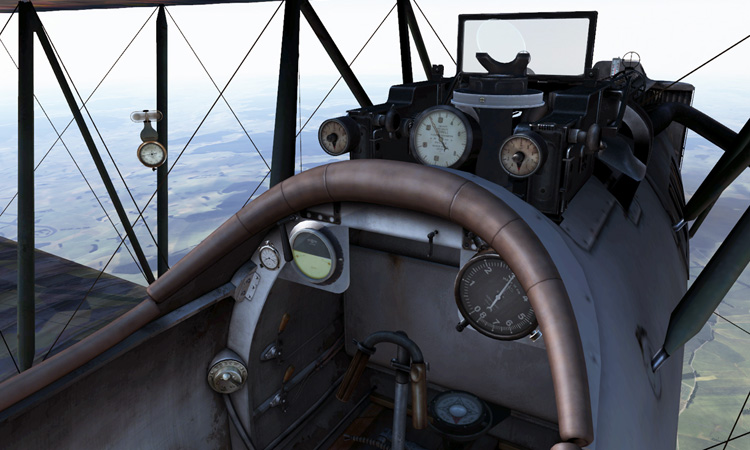 For an additional price the player can purchase alternative colors and a .45 pistol to add some more punch. Players who don’t pay for the package still get a visible representation of the flare gun (where previously the flare was simply spawned from the center of the screen). Experiments show that the .45 can be used to take down two-seaters (on rare occasions) and it provides an interesting way to vent frustrations when out of ammo or desperate. 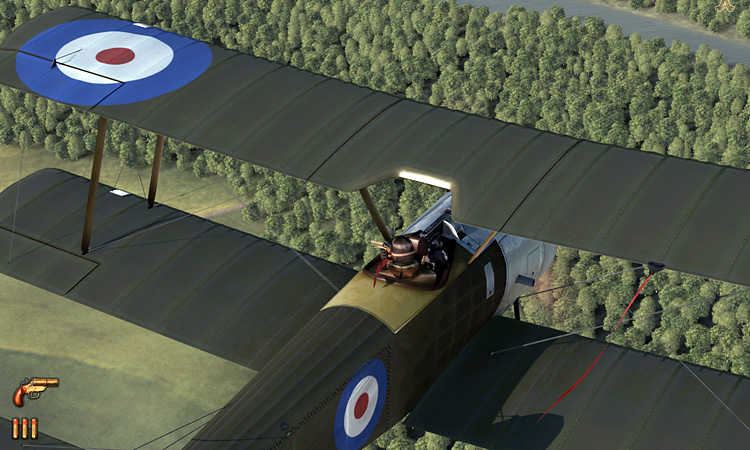 Hand guns were previously featured in Fighter Squadron: WWI, the mod for SDOE, long updated by forum member Argon V. It is nice to see this feature reach Rise of Flight (which is probably the first commercial simulation to feature hand held armaments within the cockpit). Some forum members also suspect that this may be in preparation for adding hand-held grenades to Rise of Flight — an important air-to-ground weapon during the war.