Building on the success of World of Tanks, Wargaming.net is developing another MMO action game, this one based on the high-flying action of World War II and Korean Era fighter and attack aircraft: World of Warplanes. Similar to World of Tanks, pilots can select their favorite aircraft and take to the skies with many other online players. Battle experience pays off as points that are used to upgrade your aircraft’s components, improve your pilot’s skills, and fight even better in the next online match.

I was given the privilege of interviewing Producer Anton Sitnikau, who gave me some interesting insight into their upcoming product.

Erik: When is World of Warplanes planned to be released?

Anton: We are now running Global Alpha and recruiting new test pilots every now and then. At the current stage it boils down to optimization, bug detection, and tweaking fighting and economic balance. We’re trying to figure out the key features and adjustments that are really going to bring the title to the next level — the Closed Beta. Its outcome will determine when we run the Open Beta, which in its turn will affect the release date. Preliminarily, we plan to launch World of Warplanes this year. The development is going in line with the internal schedule, so I see no reasons for delays.

Erik: What will be the cost of the game when released?

Anton: It will be possible to play and enjoy the game entirely for free. You’ll download the game client, install it, pay no money for subscription, try the game and decide for yourself whether you want to keep on playing or not. If you don’t fancy it, you’ll leave with a full wallet.

Erik: What planes are available to fly?

Anton: At launch, World of Warplanes will feature around 70 vehicles from America, Germany, and the Soviet Union belonging to three primary aircraft classes: fighters, heavy fighters and ground-attack planes. In addition to primary classes, every nation will come with a unique branch of vehicles. The American tech tree, for example, will field a branch of carrier-based fighters. Each class is divided into 10 tiers, beginning with tier 1 biplanes from the 1930s and all the way up to high-speed tier 10 Korean War jet planes. Besides multiple detailed models, we are working out original and engaging gameplay to match behavior and combat capabilities of a particular warbird type. Take ground-attack aircraft: their objective is hitting ground targets (e.g., tanks, warships, trains). Players in fighters will face off against enemies in fierce dogfights. Heavy fighters with their long range firepower and lack of agility will be mainly intended for straight-on offensive missions.

Erik: Any plans for single player missions, campaigns, or training?

Anton: World of Warplanes will offer several combat modes upon release. It will allow us to bring a lot of gameplay variety right away. Global Alpha already features the main Superiority game mode, and we are now finalizing the Escort.

Superiority is similar to Team Deathmatch, and I’m sure multiplayer veterans are familiar with the mechanics behind it: teams try to eliminate enemy ground targets and/or take down all the enemy planes. Ground targets grant different number of victory points: the most crucial will be protected with AA guns and provide more points if destroyed completely. In the Escort mode, the objective will be to clear out an enemy so that a friendly unit can make its way to a destination point unharmed. There are several more game scenarios, but I’d rather not spit them out until they are past the proof-of-concept phase.

Air combat is anything but easy-to-grasp, and we believe the training course is a must for rookie pilots. Therefore, we’re working on an online PvE-oriented tutorial to smoothen learning curve for players with no flight sim experience. Besides giving the flight basics, it will help them get the hang of the various nuances of 3D battle space, give them ideas of what they’ll need to do to avoid constantly being crushed by their opponents, and a sense of what works and doesn’t work well in the skies. 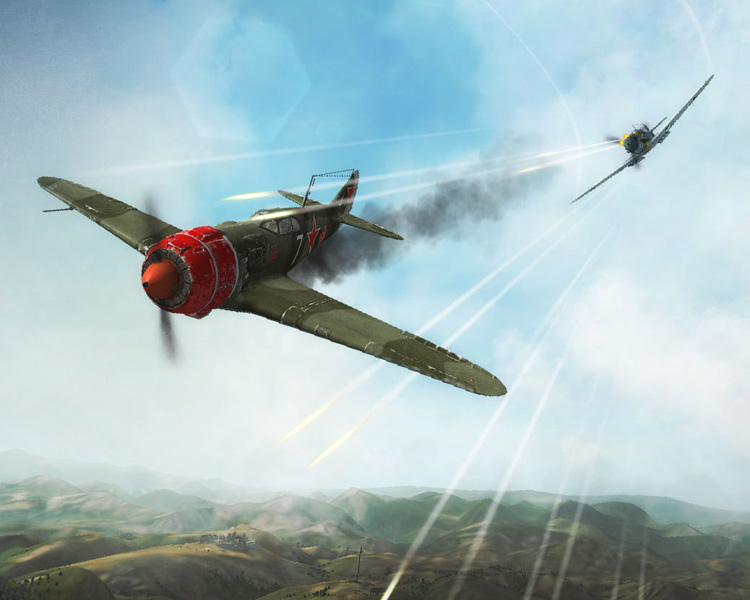 Erik: You mentioned ground targets. How much of the combat flying is air-to-ground vs. air-to-air?

Anton: All in all, the combat will be very much in the action vein, with the main focus on PvP air-to-air combat. The ATG vs. ATA ratio will depend on the game mode.

Erik: Is the ATG combat guns, rockets, and bombs?

Anton: When it comes to enemy ground objects, bear in mind that they have different levels of protection and sizes: guns and machine guns would be sufficient against lone and lightly-armed objects, but they’ll be useless for armed-to-teeth battleships and huge military factories. Air action against stronger hostile units would require heavier weapons, e.g. bombs and unguided missiles.

Erik: Will pilots be able to experience the fight from inside a cockpit? If so, will the gauges be accurate?

Anton: The game will feature the third-person camera view as the main one. Besides, players will be able to switch to a sniper mode that will in some way resemble the cockpit view, but it will be used to increase the accuracy of fire, not just to show how operating of the plane looks like from inside of the cabin. Although there won’t be a cockpit view, the user interface (UI) will have a universal set of essential cockpit flight instruments: a combined display for horizon and turn indicators, airspeed indicator, radio and barometric altimeter, etc.

Erik: Are there any images available to show the instruments view?

Anton: Sorry, none available yet. We still have a rather limited number of screenshots at this stage of development.

Anton: TrackIR is on the to-do list, but isn’t among top priority issues.

Erik: How does building up the career of a virtual aircrew member help on the battlefield?

Anton: We’ll introduce a wide range of skills and perks with an option to research several of them simultaneously. The way they will influence the aircraft performance will depend on primary objectives of a particular crew member. Well-trained gunners, for example, will have a higher overload capability than untrained ones. Also, they will be able to quickly notice an enemy and take a good sight. Pilots will be able to tap full potential of the vehicle, and turret gunners will master their accuracy.

Erik: Will there be historically accurate air battles?

Anton: Yes, we are planning to implement historical battles as a separate game mode. It will come with a strict set of rules, determining the list of vehicles appropriate in scopes of a chosen historical battle, and regulating the way planes confront each other. Plus, the game mode will have its own balance system.

I can’t promise you the release version will feature historical battles, though. We first want to tune up and polish the main game modes before focusing on introducing some legendary clashes.

Anton: World of Warplanes will feature multiple options for aircraft customization. Every plane will come with four unique camos, all of them historically appropriate. Also, you’ll get a chance to place your clan emblems, personal numbers and victim marks on your plane, so that everyone knows who they are messing with. We’ll implement frags and tail numbers, too. The color of the number will mark your rating on a particular vehicle.

Erik: How would you characterize the flight models and damage models of World of Warplanes?

Anton: As regard to the flight model, the idea was to ensure its flexibility and fidelity allows players of any skill level to enjoy the game. You’ll get a tailored mathematical flight-model with the core of controlling your plane based on the laws and physics that define real-world flight. You’ll get vibration on high speed and when gun firing, stalling, engine fires; and it will allow you to apply your piloting skills to perform aerial stunts and tricky maneuvers. Getting a bit into the weeds, we’ll give you a chance to perform multiple tactics, like boom-zoom or air-roundabout. Players will be able to perform a thach weave, breaks, Immelmans, yo-yo’s (high/low), barrel rolls, loops, vertical and horizontal scissors. At the same time, we want our players to focus on the combat itself, not on operating the aircraft. So we aimed at a middle ground between the simulation and the sheer brute-force approach. To that end, we made one or two steps away from authenticity: e.g., you won’t be able to fall into a spin or exceed the max speed limit causing damage to your aircraft.

The damage system will be well rendered and based upon where you are hit and where the enemy aircraft are hit. You won’t be able to kill the pilot by shooting at the cockpit, but there’ll be a change to knock him out of action for some period of time. And it will drastically affect the control characteristics of a plane. If your gunner gets hit, the firing accuracy will decrease or you will not be able to shoot at all. Various modules of a plane (engine, radio station, ammunition, fuel tank, etc.) will also have their hit boxes. Shooting a plane in a wing, for instance, may cause some minor effects to the handling, while being shot in the radar will play havoc with your minimap. A couple of rounds to the engine will be an all-important critical hit, likely resulting in a victory.