Time to Go Campaigning in Cliffs of Dover

777 Studios has driven a strong following for Rise of Flight through an innovative and continuous program of both free and user-pays downloadable content that started almost from launch. Many like it, some don’t, but 777 has built a hard core fan base and a very strong platform from which to grow their sim.

In these days of streaming movies, always-on WiFi and 24 hour drive-through everything, 777 with its Rise of Flight model has tapped into modern expectations for a constant drip feed of news and simming goodness.

On the other hand, there is the 1C IL-2 Sturmovik: Cliffs of Dover approach, which takes us firmly back to the 20th century.

Just to recap, the original IL-2 release came out in 2001, and it was not until two years later that the expansion Forgotten Battles followed. It was another year again until the Aces Expansion Pack and Pacific Fighters, and a full three years after that before 1946 hit the shelves in ‘07. And then nothing (if you don’t count user mods and the Daidalos Team patches) until Cliffs of Dover crept into the light in 2011.

So let’s get this stated up front. 1C is not a developer from whom you should expect a constant flow of new content, people! 1C has a strictly “last millennium” approach to building and marketing a sim platform. It will take YEARS between official releases. If you are looking for new content to keep up your interest in Cliffs of Dover, while you wait for the 1C dinosaur to lay a new egg, then you are going to have to turn to 3rd party developers.

The good news is, a highly creative German team has jumped into this void and is starting to crank out some very interesting content forIL-2 Sturmovik: Cliffs of Dover.

Their name is Desastersoft, and this article will review the first of their Cliffs of Dover add-on products, Wick vs. Dundas. 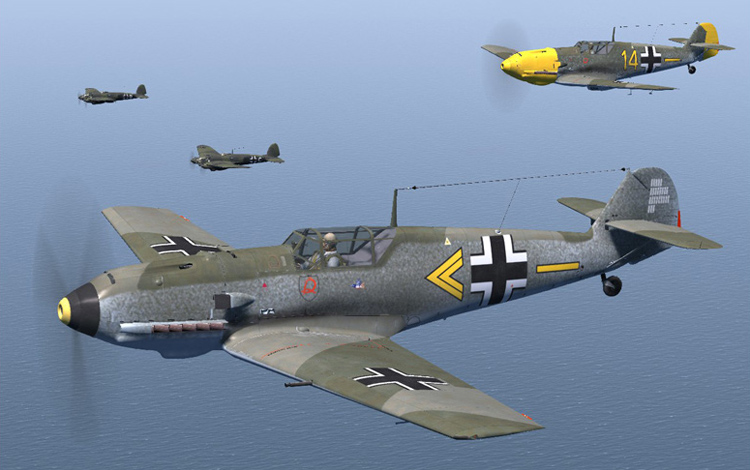 Helmut Wick and wingmen in the Desastersoft Wick vs. Dundas expansion package for Cliffs of Dover.

What Does Wick vs. Dundas Add?

Without the benefit of a 3rd party developer SDK (which 1C promised, but has not released), Desastersoft has been pretty creative in putting this package together. The Wick vs. Dundas package offers:

Personally, I was most excited by the prospect of a career system being added to Cliffs of Dover, since it shipped without any dynamic campaign, and certainly no way to track victories or achieve promotions within the game. The new career mode for Rise of Flight (a free addition) has become my game mode of choice in that sim, and I hoped the same could happen with the Desastersoft add-on for Cliffs of Dover.

The Desastersoft web site offers a choice for getting a hold of the Wick vs. Dundas package.

You can order a German language boxed DVD, or an English language direct download with payment via PayPal or credit card. The cost for the digital download is 17€ (~ $23 USD).

My German being a little rusty (!) I went the direct download route, and had an entirely painless process signing into the Desastersoft site, selecting my product, paying via PayPal and downloading the 600MB download.

Thoughtfully, Desastersoft has taken into account the current uhhh, “non-optimized” state of the sim, which can cause even modern PCs to run the game at low frame rates if there are large numbers of objects and aircraft being rendered. Users are given the option to install a low-fi (for low spec rigs) or a hi-fi (for hi-spec rigs) version of the package.

In the hi-fi version you get more of everything: more aircraft, more ground objects, more clouds — as long as your machine
can handle it. 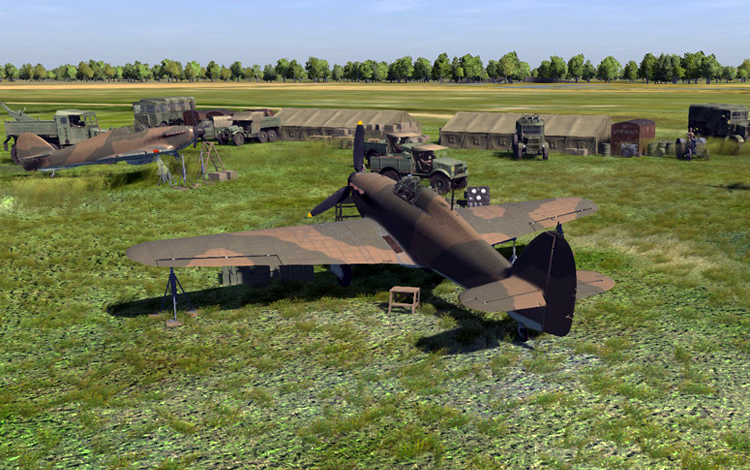 Pictured here an example of the detailed airfield object features Desastersoft has added to the game.

I recommend starting with the hi-spec version. You can always uninstall and reinstall the low-fi version if you need to. I found the hi-fi version playable on my machine at medium graphic settings. Installation was very straightforward, no issues at all. Even better, the program starts from an update screen which prompts you to automatically update to the latest version, which was also a snap. I clicked UPDATE, waited a minute or two while it chugged through the latest 200MB update, and then clicked “Play” and it started Cliffs of Dover. I was then presented with the normal startup screen, but when I clicked “Single Player” I was greeted with a new menu option: “Desastersoft Campaigns”. 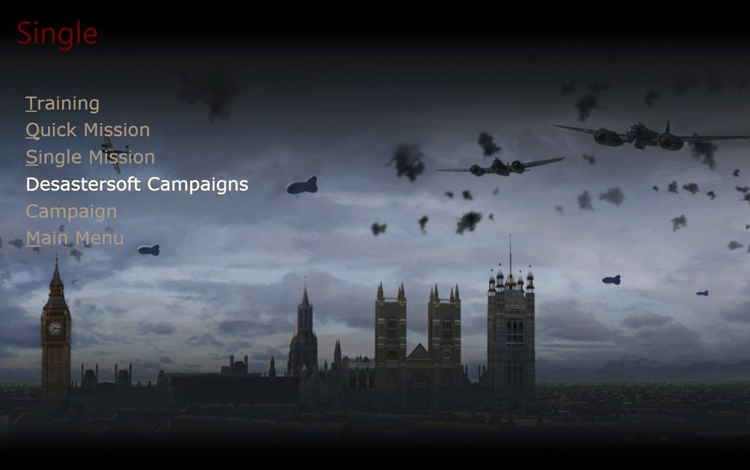 So far so good, a problem free install and update process.

Nothing is perfect though, and I do have one quibble. The install reset all my realism options to zero and unchecked all the realism boxes.

Now, there is a reason for this, which I will explain later, but I don’t think it is necessary and if you are reading this, Desastersoft, I would strongly suggest you undo this little quirk. I can see why you did it, but as a rule, you don’t mess with the user’s painfully crafted settings! It will only cause angst and grumpiness.

Desastersoft has made a nice effort to put together a detailed user manual that includes a description of the new campaign system, a historical background to the Battle of Britain which helps set the context for these campaigns, a code word glossary, German phonetic alphabet guide and target codes for the major RAF ground targets.

Does the world need yet another summary of the history of the Battle of Britain? I thought not, but this one is actually quite interesting, written as it is by a German developer. It busts some myths about Luftwaffe losses during the battle, and is actually a good read.

If you get the boxed German language version, you also get a printed topographical map of the combat area, a sector map showing the main combat zones and printed version of the manual. Maybe worth buying for the maps alone? 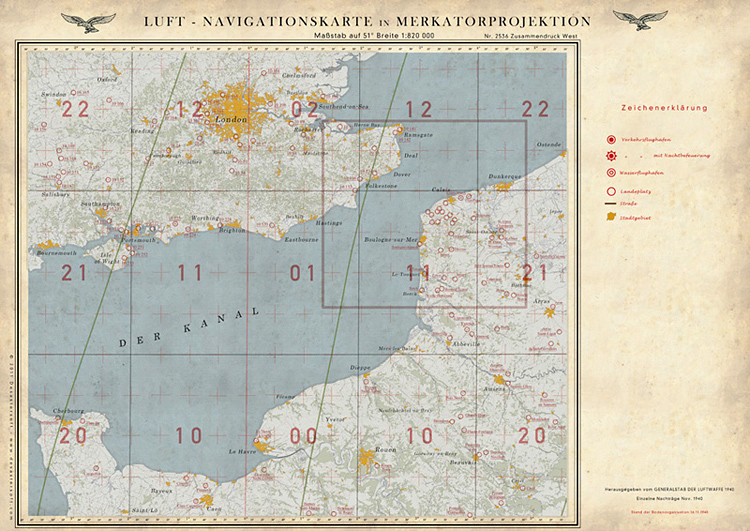