I’ve been a flight sim enthusiast for many years now — more than I’d like to admit. I started with SubLOGIC’s ATP, jumped on the Flight Simulator (FS)bandwagon with FS5, and have enjoyed the increasing fidelity and sophistication of Microsoft’s Flight Simulator franchise as it developed. Even when it was beyond the capability of my current computer, I was excited about each new iteration because I knew that I’d get to fly it eventually.

When Microsoft laid off its flight simulator group a few years ago, I, like many others, was dismayed. Is this the end of the Microsoft computerized airplane universe? I certainly thought it was. But then word escaped Redmond about an all-new flight… uh… something. I confess to feeling a twinge of excitement. Could this be the latest, best-yet version of Microsoft’s ever-improving flight sim dynasty?

If you felt the same thing, cool your jets. It’s not.

When you first run your free-to-download copy of Flight, you get one, count ’em, one airplane. And it’s a nice one. It’s an Icon A5amphibian, a brand-new real-world design. This airplane is so twenty-first century that it’s not even in production yet. The A5 is a two-seater being certified in the light sport category — meaning you need only a sport pilot license to fly it. According to Icon, this airplane is a “flying jetski” — a vehicle intended for recreation.

And it is fun. Sort of. The airplane moves through its mathematical-construct universe with a grace and fluidity not seen before in a Microsoft flight-related product. Unfortunately, it’s too graceful, too forgiving. Crashing actually takes some work. I suppose this is an attempt to make flying accessible to the masses who don’t want to actually “learn” how to land, and have it be a challenge to get a good landing every time. Sorry, but it’s not really supposed to be that easy. I wanted to avoid using the word “arcadish”, but I can’t help it — part of me kept wondering where to put the quarters in. 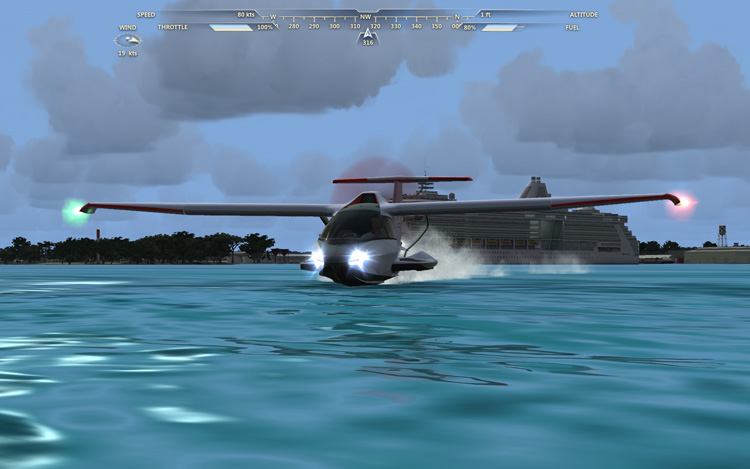 The Icon takes off from the cruise ship harbor.

There is another airplane available for download after you have jumped through a specific hoop — once you create an account on Microsoft’s Games for Windows Live combination mutiplayer venue/online storefront. It’s a Stearman biplane, familiar to long-time Flight Simulator fans from a previous version of FS. And it’s beautiful. Like all the other graphic elements in Flight, the Stearman is accurately modeled and stunningly rendered.

I’ve never flown a Stearman myself, but an airline pilot used to keep one at the field where I taught several years ago. We met up at the pumps after flying one perfect evening, and I asked him if he enjoyed his flight. He said, hell no, the airplane scared the crap out of him, and that it does it every time he flies it. I asked him why he kept it, then? He said because flying is supposed to fun, but it’s also supposed to be challenging, and occasionally scary, and he loved the airplane very much because after being a systems manager in a Boeing all week, he needed to fly something that reminded him what flying was about.

Flight’s Stearman is neither scary, nor work. I knew they missed the boat on it when I saw they described it as a “docile” airplane. Um…no, it’s not. Or it shouldn’t be. Flight’s version is simply too easy to fly. 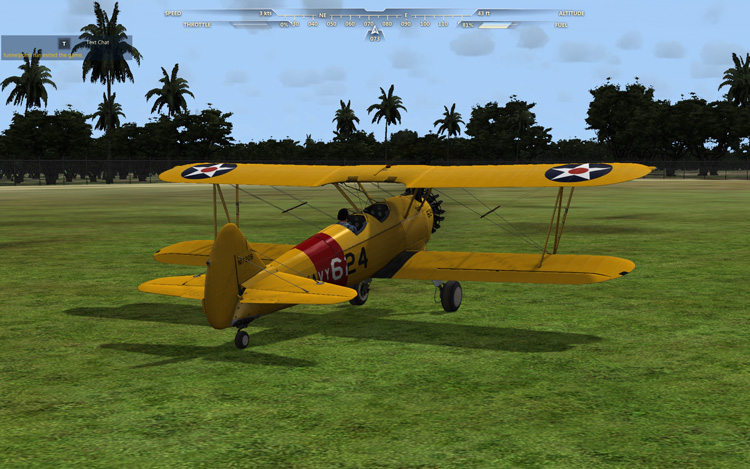 The Stearman was originally designed for grass strips. Here it is in its natural habitat.
So why did I get dinged on a challenge for landing on the grass instead of the pavement
at a small, back country airstrip? Dumb.

If you can’t be satisfied with just those two airplanes, more are available. For a price. I did download what were described as “preview” versions of the P-51 Mustang and Maule M7. In Microsoft-speak, “preview” must mean “stand-in-front-of-and-gawk” because that’s all I could do with them.

I did not shell out for any of the pay airplanes, but I have seen numerous posts that the P-51 is available in third-person viewpoint only, without an in-cockpit view. Hey, Microsoft, do you guys have any idea how much real-world flying is done from a third-person perspective? Almost none.

You get a world chock-full of gorgeous scenery in which to fly these aircraft. If you consider one isolated island “a world”. Because one island is exactly what you get — the big island of Hawaii, to be precise. Yep, when Microsoft says they give you Hawaii, they don’t mean the state, just the one island. If you decide you want to land anyplace beyond that island, you can always buy scenery packages to let you do that. While right now only the rest of the Hawaiian islands are available, supposedly in the future the rest of the world will be opened up. A la carte. For a price.

And it’s pretty, all right. Gorgeous, in fact. Flight’s graphics are simply breathtaking. It used to be when flying in any generation of Microsoft sim, I’d have to fill in details of the view out the window in my mind’s eye. No matter how good it looked, there were still things that didn’t show up there that my imagination readily supplied. 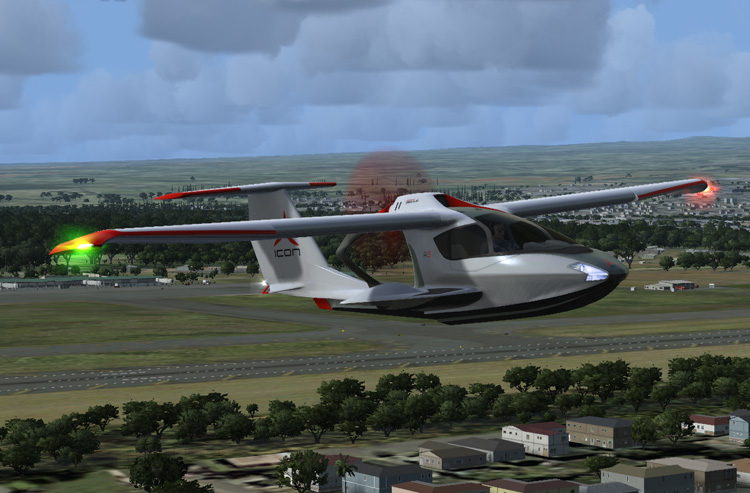 Departing the airport, heading out to sea.

In Flight, that’s not necessary. Finally, everything that you should be able to see when you look out the window is right there. And rendered in beautiful detail. If there were ever a way that eye candy could trigger an insulin problem, this thing would do it.

Is it heretical to say that it takes more than eye candy to make a good flight… something. Well, it’s definitely not a sim. I guess it’s a game, then.

While Microsoft Flight does have airplanes in it, it is not a simulation. It’s a game. It’s also — there’s really no way to put this diplomatically — an unabashedly, unapologetic in-your face money-making system. Greed is good — for Microsoft, at least — and it’s clear they don’t care if you know it.

Let’s review: In the past, Microsoft sold copies of flight sim software outright. Simple enough. But the quality and variety of the included aircraft and scenery left something to be desired. So much so, in fact, that third party developers happily jumped in, building high-fidelity versions of both which were available in a thriving after-market. Some of these add-ons were free; many were not. If you thought a particular add-on was worth the asking price, you could buy it. The relationship of Microsoft Flight Simulator to the add-on aftermarket was directly analogous to that of Microsoft Windows and the world of software applications — Microsoft builds the environment, and others build the specialized packages that run in that environment. This made a lot of sense to me. Apparently it did not to the bean counters at Microsoft.

While Flight Simulator in its various incarnations was “open”, Flight is decidedly not. It’s as closed as it gets. Microsoft creates all scenery and aircraft add-ons and sells them directly to you, the grateful (and generous, too, they expect!) Flight customer. Third-party add-ons are simply not available.

Now, Microsoft will tell you, if you let them, that Flight is free. Yes, there is no charge to download and install the product. Generous, huh? No.

Flight is free in the same way that when you get a new Ferrari, it’s free. But the keys, seats and transmission will each cost you several thousand dollars. If that was the process you had to go through to buy a car, how long do you think you’d put up with it? Microsoft actually expects you to suck it up and shell out.

What Microsoft and many other companies launching DLC business models have not figured out is, they only work in a competitive environment. Players will only continue to buy add-ons if they perceive the add-on to provide a competitive advantage in a particular game.

Gamers are a competitive bunch. Air-to-air combat, racing, FPS, heck, even space combat sims abound. Why? Gamers like to compete, and they like to win. They will happily shell out bucks or euros or yen on a continuing basis if they can get the next best “I win!” widget.

Do I need to make a point of mentioning that there is absolutely no player-versus-player competition anywhere in Flight at this point?

Will Microsoft sell many Hawaii scenery packs? Oh, yeah, tons. How many U.S. scenery packs will they move? Some. But not as many as they expect. Same thing with the airplane add-ons. Folks who buy the Hawaii pack, once it’s thoroughly explored (in an hour or two) will ask themselves a couple of weeks later what they were thinking. Odds of them going for additional scenery packs? Rapidly dwindling toward zero.

So what’s the difference between a sim and a game? To get there, you have to understand what an airplane is. Not necessarily the dictionary definition, mind you, but more along the lines of why airplanes exist. One definition could be, an airplane is a flying vehicle intended to transport people and property from one place to another.

Looked at that way, the selection of the A5 as the defining airplane in Flight was perfect. It’s an airplane that’s not supposed to be serious transportation, used in a game where it’s impossible to simulate what most airplanes are built to do — provide transportation. Unfortunately, what makes an Icon fun in real life doesn’t transfer into a game very well.

Normally, flying an airplane is knowing how to make certain numbers line up on various instruments to make an airplane go from one place to another. This is something that’s fairly easy to duplicate in a computer environment — which is why real life flight simulators like the ones the airlines use work so well. It’s also why Microsoft’s multiple generations of Flight Simulator were so successful.

But an Icon? It’s about flying from the small field behind your house in perfect weather to go to the beach for the afternoon. I can do that in Microsoft Flight, but believe me, it’s not the same as real life.

With no attempt to recreate the air transportation system, and no possible way to reproduce real-life fun flying, what’s to do? Flight has a system of missions and rewards that’s supposed to give a player goals and keep them occupied. It strikes me as pointless and contrived.

There’s a job board where you’re supposed to be able to grab missions. After just a few, you find you need bigger, faster, more capable airplanes to perform them. Which you will have to buy, of course. This is another fine example of the maddening, frustrating — and just plain insulting — nickel-and-dime, bait-and-switch philosophy on display here. (You must keep repeating the new Microsoft Flight mantra: greed is good, greed is good… ka-ching!) As a real-life pilot, any potential enjoyment I might get from flying these missions is immediately zapped by the ridiculousness of using airplanes for tasks around an island that could be accomplished just as quickly and far less expensively in a car or a boat. 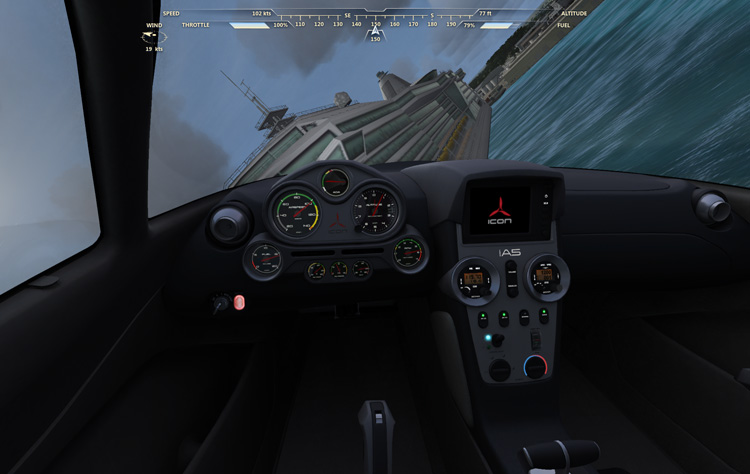 I got so bored I started doing dumb stuff. Here I’m buzzing the cruise ship in the A5.

All you need to know about the uselessness of the mission-reward system is that the first reward, granted for flying your instructor out to a wedding on a yacht in the A5, is a coconut bra. Enough said.