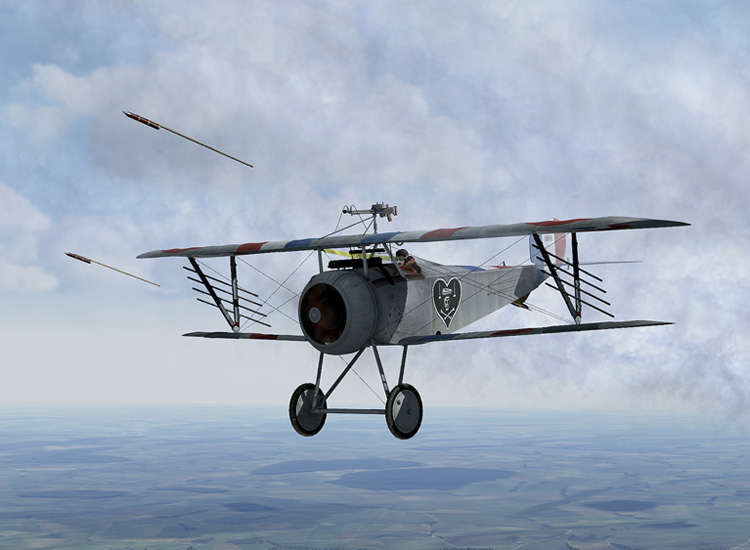 It is a time to celebrate! Three years have gone by since Rise of Flight first took us into the air… and like the early aviators a few tentative and sputtering leaps into the sky have quickly transformed into elegant and perfected designs…

On the occasion of this third anniversary celebration Jason Williams of 777 Studios and Albert Zhiltsov took some time to give us a fascinating interview. It is always a pleasure to speak with the individuals behind the sophisticated projects which we call flight simulators, they are invariably individuals who have built up the knowledge, capabilities and inspiring amounts of effort.

In upcoming Part 2 and 3 of the interview, they will be sharing with us their observations about Rise of Flight and their experience of recapturing the First World War within a game, and will also give us some insights into the inner workings of this magnificent flight simulator.

There are four exclusive screenshots added to these interviews, showing upcoming and unreleased features.

For some information on Rise of Flight, take a look at our earlier retrospective showing some of the updates released over the last year. Right now we’ll be focusing on some questions we had about updates that are planned for the upcoming year.

Jonas: The next add-on for Rise of Flight will model the battle for the channel — Why was this battle important in WWI?

Albert: The hunt for ships and submarines is most importantly interesting; the understanding that you do not have a place to land and an emergency landing in the water is very dangerous. And as always, it is only the beginning of the topic. I hope that users will be interested in it, and in the future [if all goes well] I will be able to lift my Pup into the air from the deck of the ship.

Jonas: What attracts you to modeling the English Channel / La Manche?

Albert: First of all, the new model of interaction of the seaplane with water. This is a completely new experience in piloting. In the current simulators, this component [landing on water] is made arbitrarily and in fact we do not yet have the answer to the question of “how it was”, so I really want to get it [right]. The map itself will be very different from what we have now — not just a set of trees or other houses, but a completely different theater of war. Of course, this map is [potentially] just perfect for Spitfire vs. Messerschmitt. At least one can dream.

Jonas: The Channel Add-on will include two new aircraft that can take off and land on water — Will this change our relationship to the many lakes and rivers on the existing maps?

Albert: We think that yes, but it is premature to make promises, but it is in our plans. You will be able to [hydro]plane, barely touching the chassis of the water surface. Water itself in our project — [is] a single object, whether it is in the rivers or seas — with the only difference being there are no big waves on a river that will not allow such recklessness.

Jonas: The Felixstowe and Hansa are two very unequal opponents, despite a similar speed… How do you think combat will play out between them? What do you think is most interesting about each design?

Albert: I do not think that these planes should be considered as direct competitors. Their main objective is the exploration and possible attack on ships. The fighting will be led by [the] fighters you already know, but only in [new and] unusual circumstances.

I’m a fan of the beauty Felixstowe — I really like the look of this plane, very elegant design, and there is an anchor in the cockpit.

Jonas: Version 1.026 will introduce weapons modifications and improve the modeling of the over-wing Lewis guns. Fans are very curious about this. Will this lead to longer reload times for gunners?

Albert: Basically — yes it will. Now it will depend on the design of each individual gun and aircraft. For example, in the Handley Page the nose gunner keeps [his] main ammunition stores at the end of a small corridor, which has a separate door. Therefore, a change of magazine for a bow gun will be a long process, but the supply of these magazines is just huge. 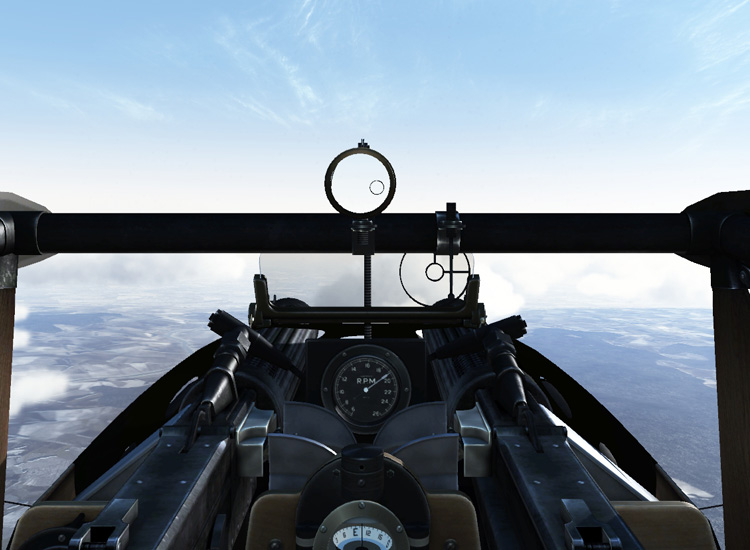 Jonas: Will gun jams be revisited (to model more punishing ones which take longer to clear)?

Albert: Slightly. It will depend on the type of magazine: tape [i.e. belt] or drum. The tape mechanism will have misfires, in the drum type it will very rare.

Jonas: What can you tell us about the new animations for the Lewis? Will they be visible inside the cockpit? Do they pave the way for the F.E.2d?

Albert: Yes, you will see all the animation of the machine gun from the cabin, also animation of the closures will become more detailed. I will not answer on the question about the FE2d. When we do it than we will discuss it.

Jonas: We will have access to two cannons. The 20mm Becker and the 57mm Davis recoilless rifle. Will the 20mm effect gameplay greatly or will it have sufficient disadvantages (e.g. slow traverse in the turret) so as to not be noticeable?

Albert: Yes, but I would not say that this is something very difficult. The difference in the speed of carriages [gun mountings / rings] in the turret exists already now, the German design is simpler and moves faster than the English one — be sure, we do not miss the little things. 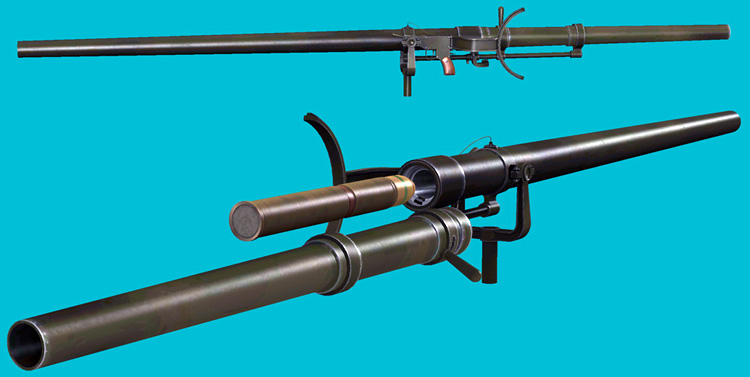 Jonas: Will the low velocity 57mm be very inaccurate?

Albert: Yes, the spread [dispersion] will be different — but we have not [yet] carried out firing this weapon, so I cannot say now how much.

Jonas: The ability for pilots to give order to gunners was discussed as a future addition to Rise of Flight — Is this still being planned?

Albert: Yes, it will be ready for the 1.026 version. Now we implement a simple logic that can be completed in the future.

Jonas: New ground objects are being developed in cooperation with third parties — Can you tell us anything about them?

Albert: This work is still in the process, so I will not tell until we will get better results. 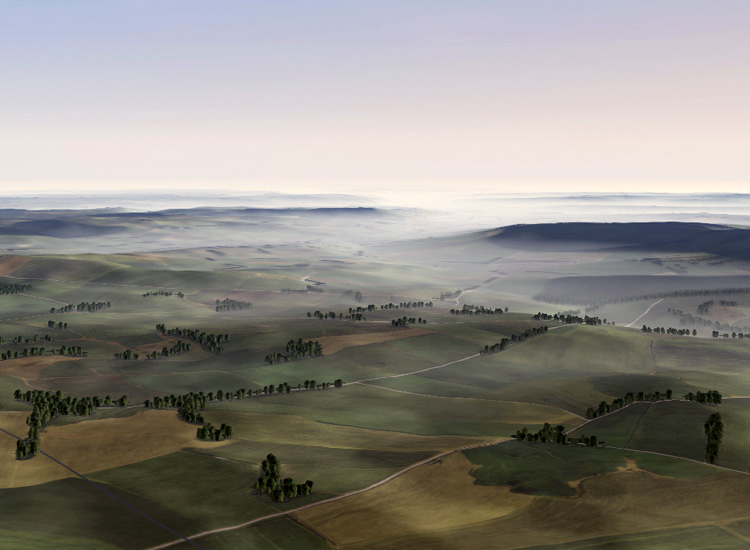 Jonas: Will ships show visible damage after machine-gun attacks (even if such attacks don`t stand a chance of sinking them)?

Albert: Not sure. We are currently focused on the completion and [adding of] increased features, mentioned above, for our high-quality planes at the moment.

Albert: We believe that there is a great setup setting [in the mission builder]. If you put the gun AA level on “High”, you should be surprised of its accuracy — it’s the level of the elite after years of training. Set the weakest AI for ground-based instruments and then you see how they are angry trying to get at a flying plane and fire more wildly.

Jonas: Is there any chance of spawning infantry (like in IL-2, and early versions of European Air War and Red Baron II)?

Albert: There is always a chance, but there is no this kind of work in our plans. All the benefits of a more modern hardware, we have spent on exploiting other techniques and features. If you are not careful with such treatment, you will have a project, which states a lot, but very little of this works. As we have seen with some other titles. To write a press release and to write a code for the project are very different tasks. 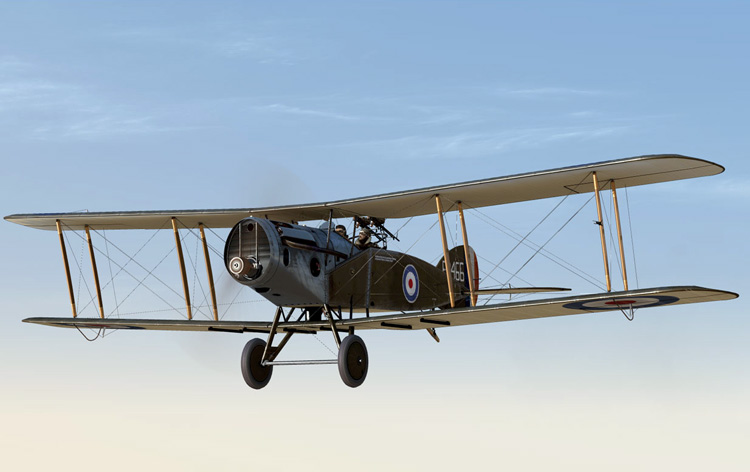 The Deep Future and Closing Comments

Jonas: Both Eagle Dynamics and Maddox Games have announced plans to develop Software Developer Kits (SDKs) for 3rd party developers. 777 Studios also discussed this idea in the past and released some tools. Are there any plans to further develop an SDK?

Albert: From my point of view the community is not ready to work with SDKs in Rise of Flight. We have repeatedly seen on the forum that some work on projects began and didn’t end in anything all that useful to us — we will not spend time on something that does not bring a good result. Some SDK documents are available now, you can write to Jason and tell him what you want to do and show proof you can do it than we will be very happy to see if your skills and professional resume matches what we need.

When everyone is talking about the SDK, it is crucial is to understand what is important, not just the document with some data, it is important to communicate and assist in the development with the help of such a tool. And to understand these documents without our additional help is almost impossible and employees with free time for such helping of SDK understanding [are something that] we do not have now. We are a small studio.

We still hope for a future process that can involve more of the community in such things, but it is proving difficult. Our attempts so far have mostly failed and wasted time.

Jonas: Are there any plans to allow mods which are currently rejected by the game (e.g. lowering the accuracy of the Colt)?

Albert: It is difficult to say what [the] number of users [is that] will like it. Do not forget we have a large community of players and not all of them are ready to write on the forums. But technically there is no problem to do it.

Jonas: Any other hints about the future?

Albert: Right now we are living in the present and working on the plan we put forth earlier this year. It was risky for us to announce and sell so many things before they were ready. It was a gamble that we have to learn from for next year. The management team, which as you know includes me, Jason and a couple others who aren’t in the public eye will discuss ideas for the future later this year. We have always set ambitious goals for ourselves and we will continue to do so. If this year’s plan works out then we will form a new plan for next year. There are still several areas of WWI air combat we have not explored [and] that we know the community will like to see. Hopefully we will have the resources to make it happen. We have always said that the future lies in the support of the community. The more you support us the more we can build.

Part 2 of our interview discusses the simulation at greater depth, describing some features and how they work in the sim.

Part 3 of our interview discusses the developer’s motivations, the challenges and triumphs in the industry, the relationship with the community and the role of flight simulators in the modern world.

Interviewer’s note: Russian is a very elegant language and sometimes requires less words to make sentences than is expected by many English speakers. Some adjustment has been made — particularly to tenses when it helped greatly with reading. Comments in square brackets are editorial additions to improve the flow for readers who are not familiar with Russian. We’d also like to remind readers that this section is mainly speculating on possible features — everything is a work-in-progress and can change at any time. The developers are taking a risk by sharing with us their plans. In some cases, they are also sharing their speculations about what they would personally like, for instance the idea of a carrier launched Sopwith Pup — which is not an announced feature. We all get excited — but let’s try not to over-react (yet anyway).