With Eagle Dynamics working feverishly on delivering a DCS: A-10C Warthog / DCS: Black Shark compatibility patch, it’s time to dust off our collectives and anti-torque pedals and start refreshing our knowledge of our favorite Russian single-seat attack helicopter: the Ka-50 Black Shark. After ensuring that your controls are all in order, you should re-familiarize yourself with basic flight before tackling the weapon systems. Check here, here, and here for some articles on the infamous Trimmer and Autopilot duo that gets so many new pilots in trouble. Para_Bellum’s DCS: Black Shark tutorial — aptly titled “How to Take Off and Blow Stuff Up” — can be found here and includes a great training mission file to brush up on your basics, including cold start (or you can just <yawn> hit LeftWin + Home), basic navigation, and basic weapons employment.

Now that you’re flight qualified, let’s check out the weapon systems. The most fun and commonly-used weapon (at least for me) on the Ka-50 is the Vikhr, so let’s take a close look at this weapon system, what it does, and how to employ it on the Ka-50 Black Shark.

You button-pushers out there who are antsy to get shooting can jump straight to here to get right to the Vikhr launch checklist while the rest of us get down to learning how this weapon system actually works.

The 9A1472 Вихрь “Vikhr” (“Whirlwind” in English), GRAU designation 9K121, NATO AT-16 Scallion, is a Russian-built laser-guided anti-tank missile system that was fielded sometime in the early 90’s. The Vikhr is carried on fixed wing aircraft like the SU-25 and attack helicopters like the Kamov 50 Black Shark. The Vikhr launcher system includes a set of six sealed missile tubes on a movable rack system that can be elevated or depressed to line up with the line-of-sight to the target (no side-to-side transversing).

On launch the missile’s motor is ignited, the fore and aft covers of the tube pop off, and the missile propels itself out of the tube towards the target, deploying it’s simple and yet amazing control fins (more on those later). The Vikhr’s rocket motor is dual stage motor with a boost phase to achieve a high enough velocity in a short enough period of time to maintain stability and a sustain motor to reach long ranges. The Vikhr can effectively engage targets as far as 8 km away on a helicopter target and up to 10 km away on a fixed wing aircraft. 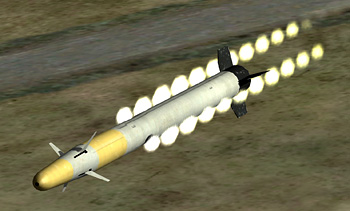 At right is an image of the DCS: Black Shark Vikhr in flight.

The Vikhr delivers a high-explosive anti-tank (HEAT) warhead wrapped in a fragmentation sleeve equipped with both a contact fuze and a proximity fuze. The proximity fuze is used primarily to engage airborne targets and enables lethal hits at miss distances up to 5 m. The contact fuze detonates the specially-shaped warhead to defeat armor as thick as 1 meter (that’s 39.37 inches to us Yanks).

Unlike other semi-active laser guided missiles (e.g., Hellfire), the Vikhr is a beam-riding weapon that has a sensor on the rear of the missile. This backwards-looking sensor detects the laser beam sent down by the launching platform. The Vikhr rides this beam all the way down to the target. This system is robust to jamming systems because the weapon looks back at the launching platform, not down at the enemy target.

Now for those control fins: unlike most guided missiles, only one of the four control fins on the Vikhr is actually moveable. The other three fins are fixed, once deployed. These fixed fins sit at just the right angle to induce a continuous roll while the missile flies towards the target. As the missile rolls around, the one moveable control fin alternately controls pitch and yaw, resulting in that characteristic spiraling flight.

The Vikhr missile is notably cheap to produce, with production estimates at one-fifth the cost of a Hellfire. Any loss in effectiveness due to the less-than-perfect guidance system can be economically countered by firing multiple weapons at a target, which pilots are reportedly encouraged to do.

The Swirly Bird in Action.