In TOH Hinds we are treated to three variants:

The Mi-24V, an updated variant of the classic Mi-24D with the newer Shturm missile that appeared at the end of the 1970s.

The Mi-24P, a variant carrying a fixed 30mm GSh-30k cannon, arguably the heaviest gun to ever see service on a helicopter.

The ATE SuperHind M.III, which I think everyone will recognize as the mutant freak of export upgrades created for the hand of South Africa’s finest. The project features night attack capability, compatibility with NATO avionics, missile warning systems, helmet mounted cannon slewing and general hot rodding in areas of engine-power, armour and IR suppression.

In addition, Take On Helicopters – Hinds has liveries from a couple dozen different countries (nicely showing the variety of Mi-24 Hind users).

Some of the following issues may arise as a part of the retailer. However, they clearly show why I hate the modern era where DVD-ROMs are no longer used.

First I had to set up an account with the distributor, then I had to buy the software, then use PayPal to finish making the order. After that was the download — which took twenty hours for the main game. I then downloaded the TOH Hinds DLC, only to discover that I had to download the patch, too. If I hit the wrong key, my install copy would have been deleted “offline content” and I would have had to download it again — so I need to back that up! So, now I download the patch. To install the game I had to enter the serial code for Take On Helicopters and TOH Hinds separately. I then had to re-enter the serial code to activate the game. To make matters worse, I had to rename the catalyst setup.exe to keep the installer from running it instead and then deleting the extract files.

Oh, what I’d give for the old days of simpler DRM and store-bought copies!

Controller configuration has a lot of pre-sets (although these were hard to find and seemed to lack guides). It did import some settings from Arma 2 (although not for joysticks!). Additionally, I had considerable difficulty setting up NaturalPoint TrackIR™.

Modifications to some of the controls effected my Arma 2 install. This is probably because I was using the same player name (which was automatically loaded from Arma 2). It would have been nice to have two simultaneous controller setups — one for combat helicopters and one for civilian helicopters (like the type-specific controls in DCS and Rise of Flight). I’d recommend using separate in-game “player names” for Arma 2, Take on Helicopters, and possibly, TOH Hinds (and combat helicopters in general).

Changes to controller sensitivity had very large effects on how the flight control system of the helicopter functions, which in turn effects the performance of the aircraft. This is an issue shared with Austin Meyer’s X-Plane, but largely fixed in modern combat simulators. 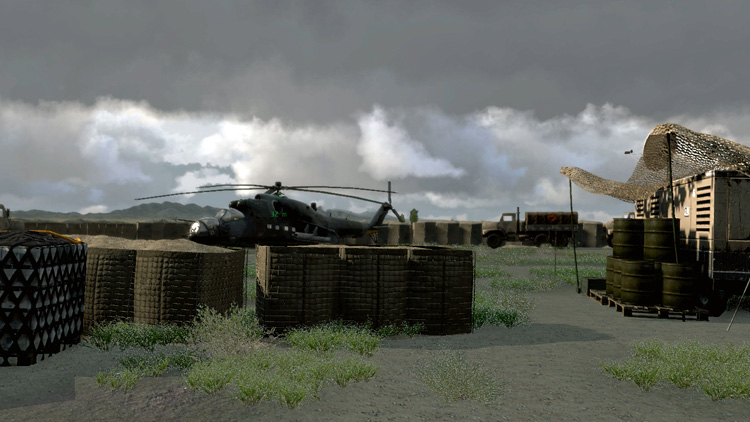 While it retains a small cargo capacity, in practice the risks are too great and the additional weight is too much for it to be desirable go into combat with commandos in the back. Rather, this cargo capacity typically allows the helicopter to assist in redeployments and to quickly switch roles — from deploying troops to supporting them. This is the “aerial BMP” concept — part of a broader policy pioneered in the Soviet Union which sees some “troop-trucks” equipped with armour and armament.

As a result, myriad types of combined operations are an important part of a Hind simulator. Digital Integration’s classic simulator Crocodile (the only dedicated Mi-24 simulator yet produced) was one of the first simulators to include animated infantry back in 1997. This should be easy for Bohemia Interactive to do, considering that Take On Helicopters – Hinds is based on a first person shooter engine. The capability to carry people in the Mi-24 cargo compartment exists in TOH Hinds— however it is completely unused in the default scenarios. Where medivac, rescue operations, insertions, heavy defensive weapon transport (e.g. PKT for self defense), carrying supplies to set up a FARP (Forward Refueling Point), and escort missions could have be modeled, we see a much narrower vision. In TOH Hinds we only see the attack and counter insurgency (COIN) roles.

Furthermore, counter-insurgency is often against trucks or tanks (in an environment free of collateral damage) and the enemies are located at waypoints (making them relatively unsurprising and easy to take out). The drama of flying decoy for transport aircraft, of attempting to defend a convoy from ambushes, or of rescuing special forces which have been driven to a hilltop is completely missing from TOH Hinds.

The positive side is that the randomized missions provided are good examples of what can be done to create flexible and replayable content in the TOH Hinds’ engine. Hopefully this will prove very inspiring to mission makers.

Take On Helicopter’s elegant mission editor is derived from the Arma series, but is further upgraded and more capable. It seems to lack altitude settings for waypoints, but is otherwise excellent with very nice scripting, randomization, and unit control options. There is tremendous potential here. 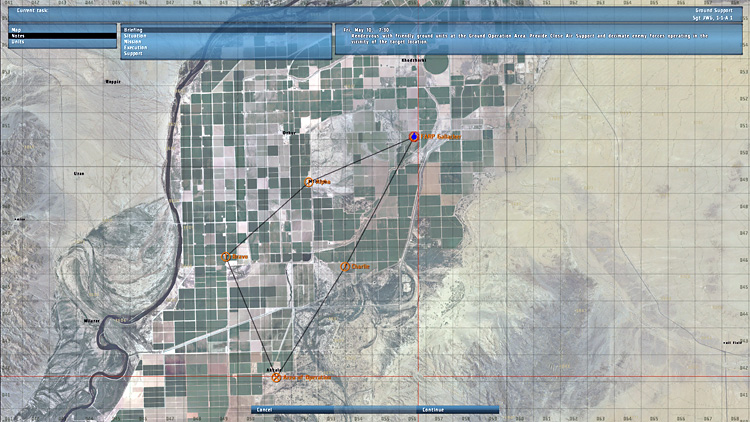 Enemy helicopters are aggressive and accurate in TOH Hinds. In this sense they beat venerable sims like EECH, DI’sCrocodile, Operation FlashPoint and several others (with the only roughly comparable competition coming from DCS: Black Shark or Gunship!). This aggressiveness in enemies is both refreshing and enjoyable.

Infantry do not use small arms against helicopters in TOH Hinds. It is important to remember that helicopters tend to only have critical components be fully armored and enough assault rifle rounds can cripple a helicopter which might initially survive a couple of 23mm hits. This was noticeably shown in the ambush of Apaches from the 11th Aviation Regiment at Najaf — an incident which caused a switch from pop-up attack influenced tactics designed for the Fulda to fire-on-the-move tactics closer to those employed by the Hind. 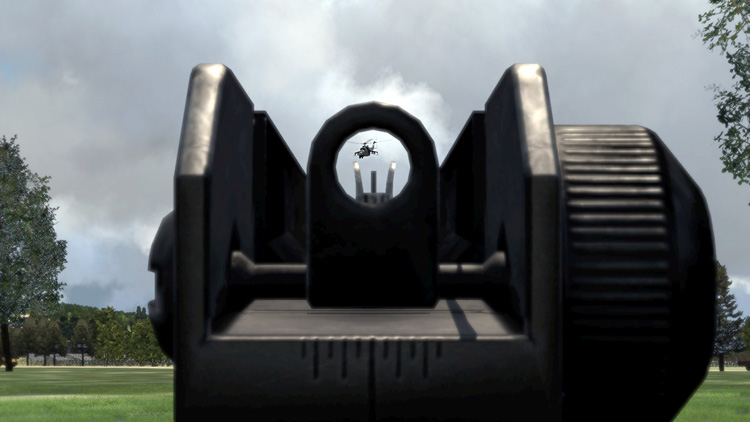 While infantry caliber weapons and rocket-propelled grenades are not used against helicopters in Take On Helicopters – Hinds, MANPADS (Man Portable Air Defenses) are modeled. There are also several static air defenses, which are nicely included in the package. Tests against landed Hinds in TOH Hinds, suggest that the front glass will easily repel heavy machine guns, but the side glass will not (showing some nice detail in the damage model’s coding). The damage model of vehicles is better than most flight simulators (including the possibility of mobility kills).

Vehicles (except for the T-34) will engage the helicopters with both their co-axial and anti-aircraft machine guns (if they have them). They’ll also engage multiple targets simultaneously. I suspect that I once saw a T-72 fire its main gun at a helicopter, however the BMP-2 won’t fire its 30mm cannon unless the helicopter lands. Tanks will pop smoke when under attack!

The eerie sense of vehicles creeping up on the helicopter through the undergrowth (combined with the heartbeat like thumping of the rotor-blades) that I was so familiar with in Gunship! wasn’t there — partly as most of the missions take place in empty areas and seem to lack unmarked and mobile enemy positions (away from the target waypoints).

Vehicles hiding, fleeing, moving and even pursuing helicopters should be possible in TOH Hinds with the mission editor or a bit of fancy scripting. Furthermore, some quick tests show that the vehicle AI will change its location to get a shot at a helicopter if it loses line-of-sight and I’m under the distinct impression that I’d seen tanks temporarily retreat after their formation took casualties.

One very cool behavior is that I once spotted an Mi-24 Hind hovering over the battlefield (within arm’s reach of the ground). I then noticed two crew-members from another downed Hind running towards it at full speed! Yes, the AI improvised a rescue!

Only one map (the desert like “South East Asia” map) has destructible buildings and all of the default missions are set there — although the mission editor can be used to create missions on any map — including 3rd party ones.

In TOH Hinds, interactions between WSO / Co-pilot / Gunner are minimal compared to sims like Ka-52 Team Alligator orGunship! While it might have been nice to have the ability to set gunner targeting priorities, or to tell the pilot the altitude and speed to fly at, these things are extremely hard to get right and I understand the choice to leave them out at this point.

This doesn’t negatively affect gameplay as much as one might expect when riding in the gunner’s seat (especially as there is an option for the gunner to take over the flight controls — a nice addition compared to Arma 2 and previous titles). When flying as the gunner, the pilot AI flies in a relatively reasonable manner most of the time. The pilot AI will also call out targets, but the gunner AI won’t (instead an Arma style target display is provided as an option for the HUD). The AI is also quite competent with bomb runs.

A stop / hover command would have been extremely useful for missile attacks. The pilot AI does approach a bit quickly and at high speeds — which can make it hard to use the manually guided missiles effectively. A retreat command would also have been great.

When using rockets or cannon, the AI pilot is also incapable of aiming at moving vehicles if they are “crossing the beam” (approaching the vehicles from the side).

It is also possible to fly co-operatively in multiplayer — with one player as the pilot and another player as the gunner (and with even more in cargo) — which could be a lot of fun and obviously overcomes the AI issues.