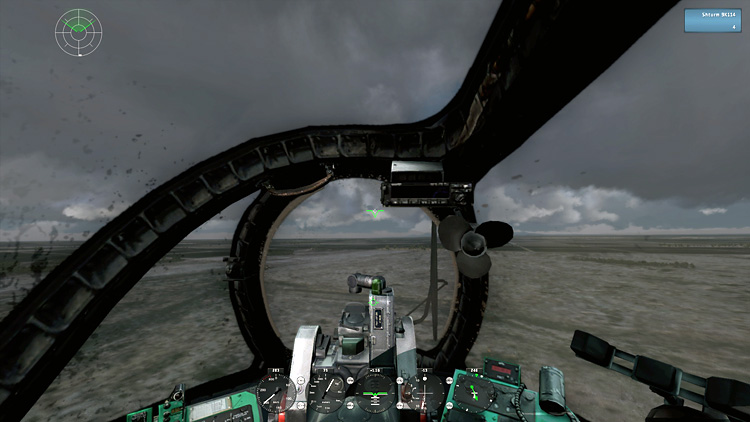 Regarding the Real World Hind:

The original Mi-24 prototypes lacked “stub wings”, having only weapons racks. During development, controllability problems lead to a redesign as a winged helicopter. This means that the Mi-24 has some unusual handling characteristics:

When in a hover the stub-wings block some of the rotor-wash, catching air on its way down and reducing lift. As a result, fully loaded Hinds prefer rolling take-offs.

The large wings produce a lot of lift at high speeds (20-30 percent!). This allowed the Mi-24 to become one of the fastest helicopters in the world. In addition, the anhedral (angling downwards) of the wings means that the aircraft shows a natural tendency to easily “roll and pull” into nice sweeping turns. In fact, it is said to be almost aircraft-like at speed. In contrast, the Hind is more difficult to control or safely make very sharp turns at very low speeds.

One final note is that some maneuvers risk the rotor-blades chopping off the high tail boom. The helicopter wasn’t designed with aerobatics in mind, but aircrews quickly pushed the limits in combat environments.

So what is it like in Take On Helicopters – Hinds?

The overall flight model in TOH Hinds feels quite good and is very interesting. I’ve never flown a helicopter in real life, so I’m hardly qualified to assess this, but I can say that it is better to have the sense of floating on a cushion of air than to have a poor flight model with some of the more exotic aerodynamic problems modeled (e.g. vortex ring state, etc.) and that this sensation is something that TOH Hinds does well. The flight model is quite tricky for hovering and landing — although it appears a bit too forgiving for the really crazy maneuvers. So, it seems helicopters can be dangerous to fly under fairly normal conditions, unless you’re a lunatic — then everything works out fine!

One issue I find is a relative lack of coupling between pitch, roll and yaw. It seems like roll and pitch are calculated separately. Similarly, there is very little sense of modeling rotational stability (a self-righting tendency), although bank and velocity do affect turn rates. So, in this one respect, the flight model sometimes feels more like the sci-fi Echelon Wind Warriors, or Operation Flashpoint (OPF), than most flight simulators.

Turbulence, vibrations, and interactions with the airflow are noticeable at speeds (although the airflow vibrations don’t affect the gunner optics or gunsights).

The flight-model for the Mi-24 seems less optimized and less natural than it does for the more conventional “default” helicopters in Take On Helicopters – Hinds.

Wheel brakes can be released which allows for taxiing and realistic rolling start although there is usually more than enough power for a vertical takeoff.

Authority remains with tail-rotor rather than wings at speed (uncoupled like the aircraft flight models in OFP / Arma). This means that it doesn’t get easier to roll and bank at speed. On the contrary, the long fuselage combined with the tail rotor can easily lead to yaw oscillations and deathly snaking if used near maximum speed.

I didn’t get much of a sense of transitional lift or loss of lift in a hover, but then I’ve never actually flown an Mi-24. 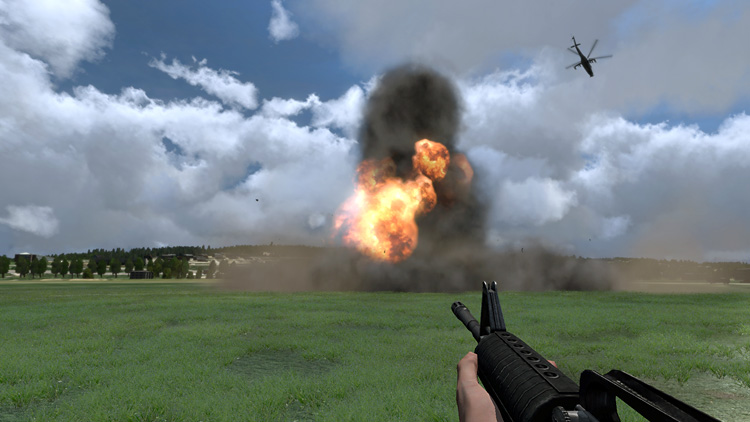 Of the 17 weapon systems carried by the Hinds helicopters, we only have 7 modeled — not including two additional weapons, which are shown in the game, but which are not typically carried by the variants of the Hind included. This unfortunately misses entire categories of weapons which really break the mold we’re used to in attack helicopter simulations. However, to celebrate a weapons-load only equaled in variety by the early assault Mi-8s and UH-1 Hueys.

Here is a summary of the weapons:

Our variants would be 9M114/9M114F Shturm complex, as well as the Denel INGWE and Mokopa missiles for the SuperHind Mk.III. TKoH includes the 9M114, and its successor — the 9M120.

One of the neat features of TOH Hinds that one has to manually correct the aim-point for the cheaper radio-guided missiles (SACLOS rather than semi-active laser guidance). This makes it a bit challenging to aim from the gunners position, but is generally a much appreciated addition to gameplay. The 9M120 is used to replace the South African missiles (which are missing from the game). The 9M114 is only available for the outer hardpoints (so only 1/2 the maximum load can be carried)

Here the modeling is less impressive than DCS: Black Shark or EECH (thanks to “arneh’s” improvements), largely due to the lack of rocket dispersion and burst modes (which limits the ability to use Russian techniques). In particular, the lack of dispersion seriously affects gameplay and significantly changes the way rockets are employed by the player.

This is only provided as a 4xFAB-250 loadout that can’t be mixed with rockets. I’d also have liked to try the 10xFAB-100 bomb load of the famous helicopter-bombers. The AI is nicely able to deploy bombs (making the possibility of nice “escort the heli-bomber” missions).

Ricochets are nicely modeled. However, the guns lack dispersion (except possibly the GI-2). The lack of recoil on the GSh-30k also allows it to be fired in longer bursts than is realistic. On the other hand, the GI-2 20mm has a neat vibration effect when looking through optics.

I would have loved the side gunner positions — something now supported by the engine, but not modeled. It would have also been nice to see some of the gunpods (in particular the GUV pods with their grenade launchers or triple rotary guns).

A reflector gunsight or variable rate of fire on the GSh-30k would have added a lot to sense of motion and aiming. It also isn’t possible to select custom or mixed weapons loadouts — so the four main hardpoints all carry only one type of weapon in a given mission.

It would very much have been nice to model more varied weapon loadouts — and in particular, ballistic dispersion for rocket and cannon rounds.