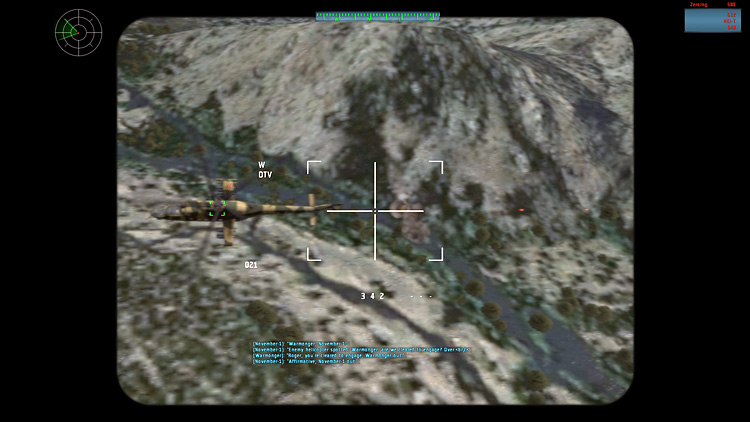 Decrease the maneuverability of the 9M114, Massively decrease maneuverability / off-boresight and attempt to reactivate semi-active-laser code for the IGNWE (and possibly adding the Mokopa).

Tweak the flight model’s high-speed handling to better model the maneuvering effects and transitional lift of the stub wings.

Add dispersion and burst modes to rockets (either by modeling them as guns OWP style, or by using scripts ACE style).

Add increased recoil effects (e.g. shaking) for the Gsh-30K (this one might be a challenge for scripters).

Dim the brightness of the Hind’s gunsight in order to make the fact that it is just a texture (as opposed to an actual reflector gunsight) is less glaring.

A mercenary campaign is a particularly interesting possibility that is essentially left out of the official package.

In addition, the requirement to buy Take On Helicopters as well brings the entry price to $65. A stand-alone Mi-24 sim which was sold for $30-40 (and could be merged with Take On Helicopters) would probably be much more accessible to the military sim market.

Should you purchase? Consider the scenarios below:

“I would like an engaging civil helicopter sim with some military features in the same vein as the original Search and Rescue!”Recommendation: Buy Take On Helicopters.

“I would like to expand the military component of Take on Helicopters, I love how the Hind looks and I’d like to encourage the developers!” Recommendation: Buy Take On Helicopters – Hinds.

“I would like an Mi-24 sim however, I’m not picky: I want varied missions and I don’t care about graphics or enemies which are easy to shoot down! Alternatively, I want an Mi-24 sim which models rocket dispersion and salvoes and has slightly newer graphics, but has less mission variety, and still has non-aggressive enemies!” Recommendation: Buy Digital Integration’sHind, or alternatively, Enemy Engaged: Comanche-Hokum (and update it with the latest 3rd party patches). Both were just re-released by Good Old Games after years of it being hard to track down (and both are much cheaper options). Unfortunately, you’ll be missing Take on Helicopters.

“I would like the ultimate Mi-24 sim!” Recommendation: This is not your hour of glory. You have yet to wait for deliverance. If you have enough money, several decommissioned Hinds are available for apparently sale (at a little under a million dollars, they typically cost just 10,000 times the price of TOH Hinds).

On the whole though, I can say that Take On Helicopters – Hinds is a very pleasurable outgrowth and quite competent considering that it is a modification to a civilian flight simulator, that itself is a development of a first person shooter.

We should be very glad of the opportunity it presents to the community.