Doug: What sets Rogue System apart from these other recently announced titles?

Scott: Well, since I haven’t seen the design docs nor played these titles that’s a tricky question to answer. However, what Ican tell you is this: from day one my goal has been to create the most detailed space combat / trader / explorer to date and to put you “in” the cockpit via your pilot “avatar”. To my knowledge no space sim, past, current, nor upcoming, will have the same level of system fidelity.

By doing this I’m hoping to challenge the player to get the most from their ship in the worst of circumstances; to feel the panic of the situation through their pilot avatar; and to have the satisfaction of setting a crippled ship down safely after a gut-wrenching mission.

The type of immersion and interaction I’m talking about isn’t just clicking a button to activate the scanner and seeing the onscreen pilot press a button. This is about all the things that go into making the scanner function properly, and how to best use it under various conditions. It’s about witnessing the effects of your pilot beginning to freeze to death – trapped in the cockpit of a dying ship in the shadow of a planet. You’ll see the condensed breathe, and hear the chattering of teeth and the labored breathing. All this, I feel, is Rogue System’s “hook” the pilot / ship / player relationship. 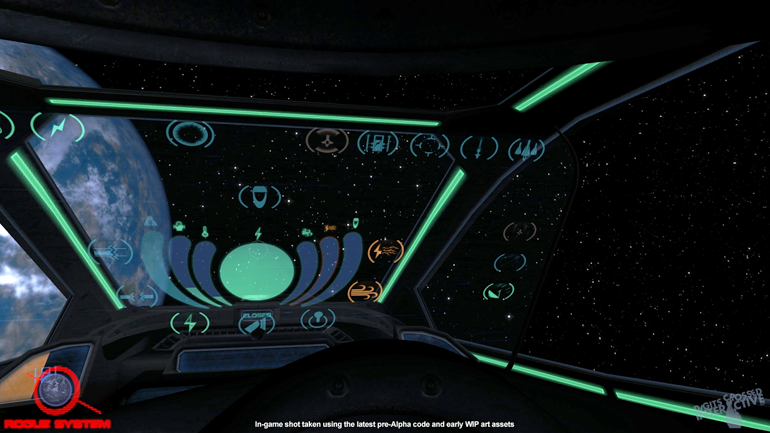 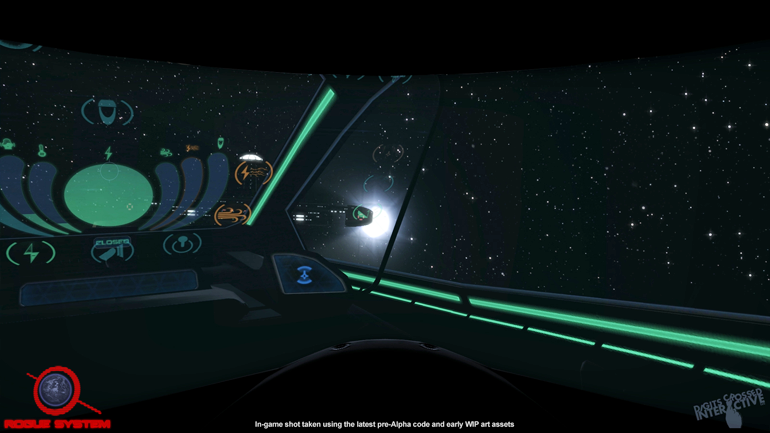 Doug: Can you give an example of the type of fidelity you’re trying to achieve?

Scott: The best way to answer is to give an example of how all the ship systems function and fail together. Everything I’m about to tell you actually works right now, by the way, in various states of completeness. You’re in combat. A missile explodes near your ship and you take blast damage that degrades the engine’s cooling ability. The damaged engine now does not provide proper coolant pressure for other systems, which in turn causes them to start overheating. This increase in temperature not only begins to damage each affected system, but it also increases the internal temperature of the ship.

This increases the ship’s radiation footprint, making it stand out more against the solar background clutter and an easier target for RAD-sensing trackers. It also causes the environment system to work harder in order to keep the ship cool enough for the pilot. The increased workload of the Environment system can damage it to the point that it can’t maintain internal temperature, in which case, depending on where the ship is located, the pilot could eventually freeze or bake to death.

Now, back to the heat-damaged components. Depending on the type of systems affected the player could shut these down in order to prevent further damage. If not, these have the possibility of failing completely, igniting an electrical fire (if they’re in an oxygenated compartment) or even exploding.

Either way, their lack of function in turn affects other systems, such as shortened communication range because the tracking system can no longer lock the antenna on to a distant target. If they do suffer a critical event such as a fire, this can spread to systems in the immediate area (system component locations are also tracked), thus spreading damage to systems that weren’t even on the engine’s coolant bus.

At this point the pilot character may be starting to panic. Their heart and breathe rate increases, causing them to use more and more precious oxygen, which is also being burned away by the fire. Both the pilot and fire are creating higher levels of CO2, which in turn can overwhelm the CO2 scrubbers (assuming this a humanoid race that requires O2 and expels CO2). The situation is disintegrating very quickly – high levels of CO2, low levels of O2, excessive heat, fire, failing systems, limited comm range, etc. If the player can get it all under control they can call for help. If not, they either leave their ship by various means, or die with it. 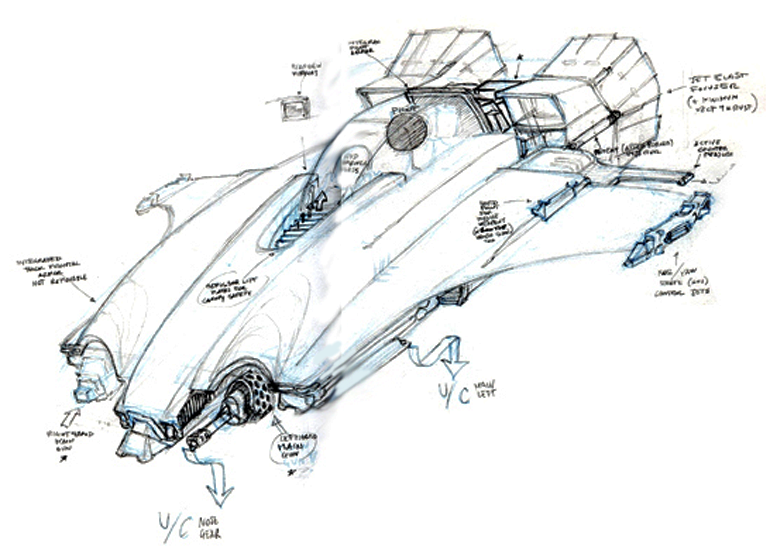 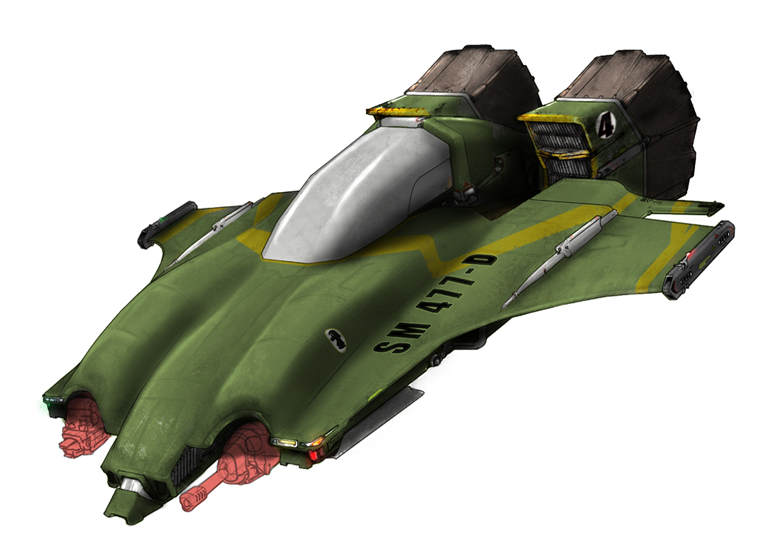 Concept and surface study for the Lightening II

Doug: So Rogue System is designed for the “hardcore” audience?

Scott: Some YouTube comments from one of the early development videos were “Is this DCS Space?” and “looks like Falcon 4 meets Freespace”. I’ve seen similar references elsewhere, too. These are accurate statements. My goal is a level of fidelity that could rival flight sims like Falcon 4.0. And again, it’s not just about the ship, but about the pilot and ship and how they function together – what the pilot does affects the ship, and vice-versa. In this respect Rogue System even has a type of RPG element in which you can do certain things to help your pilot function better under certain conditions as long as they are healthy (such as withstanding higher acceleration loads for a time). It’s a very complex relationship.

All this said, it’s also my job to make Rogue System accessible to players of various levels of skill and time commitment. For that reason I’m adding a series of options that I refer to as “Accessibility Options” so that players can tailor Rogue System to their liking. Later, when multiplayer is added, the host will be able to allow the client to join using some, all or none of these options.

Doug: What about the flight model?

Scott: Each ship has main engines as well as maneuvering thrusters (which can be fixed or vectored) which work to translate and rotate the ship. Start spinning, or moving along a vector, and you will continue indefinitely unless something interferes with you. There are various systems that allow the ship to perform somewhat like an atmospheric fighter, and their effect can be adjusted or bypassed completely. While helpful in some situations, such as combat, they are actually a hindrance during take-off and landing procedures, as well as for intra and intersystem travel. Here, you’d want to set a trajectory, turn off these systems, do a burn to build some momentum, and then engage one of your long-range drives. At this point you’d be free to walk to other areas of the ship if it were large enough and do other things, like entering SAN.

Scott: Suspended ANimation. this is Rogue System’s “hyper sleep”. Since you can go from planet to planet and system to system (and anywhere in between), and everything is at a “real-world” scale, you can imagine that some journeys could be somewhat… lengthy. Now, with our various intra and intersystem drives these times are greatly reduced. But a trip from one system to another could still take weeks, literally. Obviously that would get boring pretty quickly, so once you initiate one of these drives you can enter SAN – the trip will seem instantaneous. Your SOI (Ship’s Onboard Intelligence) will wake you up for various reasons, such as reaching your destination, course correction, or happening upon an unexpected object (there’s other things, too, but I don’t want to spoil them). Now, of course you couldn’t do this in multiplayer as everyone would get out of sync, so we’ll have to revert to instantaneous jumps for it.

Doug: Why a course correction? Can’t you just point to the destination and go there?

Scott: All celestial bodies in Rogue System move and orbit in real time – some planets can literally take hundreds of years to orbit their stars. You could play for your entire lifetime and never see a full orbit. Even while you’re in SAN everything gets updated appropriately. Considering that, a slight miscalculation in your jump trajectory, or a slightly under performing “Dark” Drive or “Bubble” Drive, could cause you to go off course. You’d need to make a correction in order to reach your destination. Your SOI will be there to help with all of this.

Q&A with Oleg Maddox on “Storm of War: Battle of Britain” Page 5