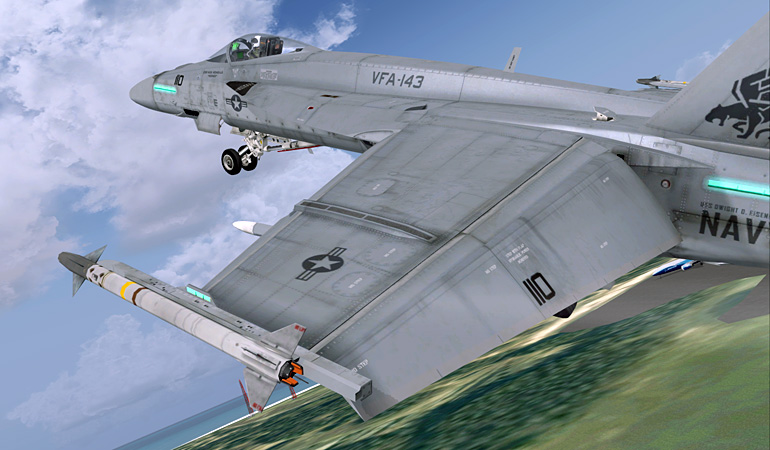 For military aircraft aficionados, the TacPack addition to the VRS Superbug is well worth the wait. As you may know, this project has been a long time coming. An add-on product for FSX that uses as its foundation a multiple award-winning virtual aircraft – all from a studio with a proven track record in flight control modeling, is a pretty darn solid footing on which to build on. The flight sim community is lucky to have a dev team like VRS that recognized the potential of FSX as a combat flight simulator and imagined “what if?”, then took their “what if” and made it happen. This labor of love now gives the flight sim community the capability in FSX to shoot down aircraft and drop bombs onto unsuspecting targets below. Could VRS’s TacPack have just provided a reason for Microsoft to restart production of FSX? This new add-on is truly a game-changer for fans of military flight simulation products. Once the @War project has been released and with the addition of no-password-required servers it will only get a lot better.

But VRS isn’t stopping to pat themselves on the back just yet. Their web site also announces plans to release a Software Developer’s Kit (SDK) that will allow advanced systems integration with other aircraft add-ons, and a basic Aggressor system that will be accessed by an in-flight menu system. As of this writing, VRS is currently working with Aerosoft, Iris, Milviz and other developers to create more aircraft that will fly in the TacPack environment. Already Aerosoft has posted a video of their upcoming F-14.

The future of FSX is looking pretty bright, as exciting new mods like TacPack add a whole new spectrum of gaming options to that venerable simulation platform. Fans of the genre should be very pleased by this new product.