By tweaking existing ships, TF has created some new types. It has long been an annoyance for mission builders that there were no Royal Navy warships in the game. From the existing Kriegsmarine Mine Layer, a Flowers Class corvette for the Royal Navy has been created. It is also nice to have some new merchant ship skins such as the hospital ship model. 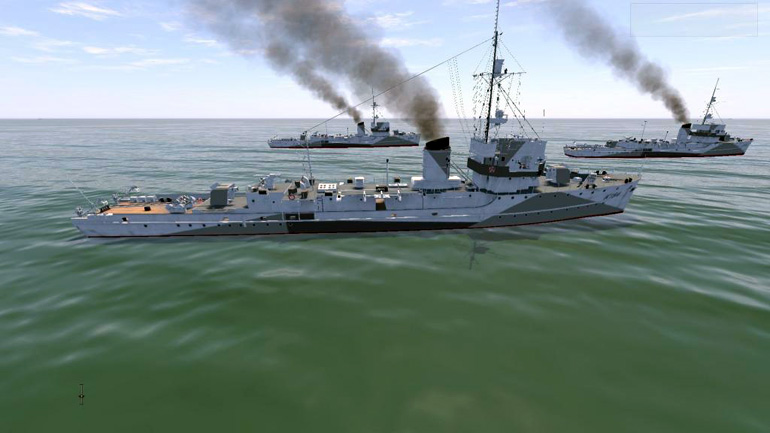 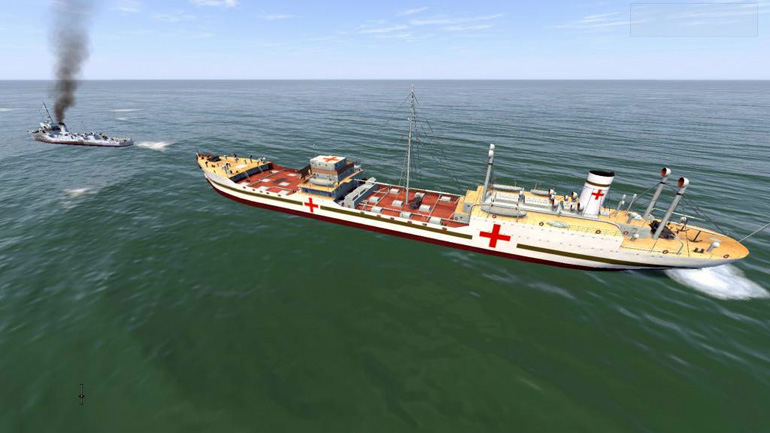 Other aircraft variants have also been added, notably new 100 Octane variants of the Hurricane and Spitfire, and a new 100 Octane Bf109 E4/N, which is now the best performing Bf109 in the game.

Sokol1: “The new Bf109 E4/N seems a bit slow in initial climb, but has good performance at high altitude. It also requires careful handling of ATA and RPM and a constant check of engine temps to avoid engine trouble.“

Flight notes from Team Fusion indicate the E-4N should climb faster than any aircraft in the game, at both low and high altitudes, so it is obviously a beast that will challenge its pilots, and its enemies!

Sounds are such a subjective issue that some players will like the changes the mod has made, while others won’t. Personally, I really don’t like the new .303 in-cockpit sounds, which are meant to simulate the “tearing paper” sound pilots reported when the 8 Brownings were all firing at once. To me they sound more like a child making machine gun noises with their lips! The outside cockpit sound is fine.

But if you don’t like the TF mod sounds, you can just copy the original sounds back manually.

Sokol1: “The Merlin engine sounds impressed me, even though I also liked the stock sounds, and didn’t feel there was a need to change. I think the .303s sound too “über” from inside the cockpit, and bring to mind an A-10 cannon sound. I also think that from the outside view these sound fine, and remind me of the sound of WWII .303s unearthed in Ireland, which I saw recently in a YouTube clip.”

TIP: Apparently the sounds are best heard if you turn up the volume fully on your system, and then adjust loudness through the in game settings menu.

I predict this will be one of the most discussed, even controversial, elements of the mod. The way in which cockpit glass reflects light has been dramatically boosted so that a bright flashing light is visible at a distance at which the aircraft itself may still be barely a dot. This means that a group of fighters coming toward you, depending on the position of the sun, will wink and blink as their canopies catch the light. One less enthusiastic player has described this effect as “crazy Christmas lights”. I don’t think it is that bad, but I could definitely live without it. Where it is very useful is in online dogfighting, where aircraft have been notoriously difficult to spot in IL2CoD at greater distances or against the ground clutter. Now, there is an added chance that as they maneuver they will catch the light, and you will be able to see them. Once again, it would be better to be able to enable / disable this feature.

You can see for yourself in this video I made… 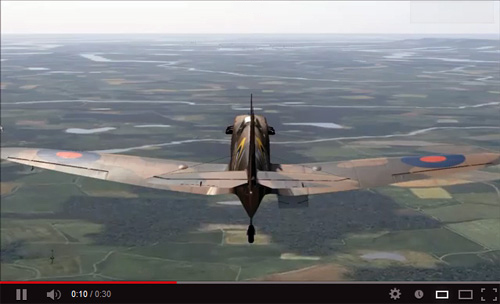 In game video of reflections off approaching aircraft.

Sokol1: “The cockpits seem better defined, the outside view more clear, the tree shadows have almost no flicker – this was one of the the more annoying features in scenery pre-mod – but the scenery shaking in the background remains, maybe a little less. Overall, visuals have improved. But the glass reflections are overdone. It is like the entire plane is reflective, and not just the glass surfaces. Maybe this effect should be decreased 50%, but as it pleases online players because it makes it easier to see enemy planes, I predict it is unlikely to be changed.

And there are other lighting issues. One of the big ones is the view at night. Clouds are too bright at night, around 1:30AM they seem phosphorescent, with a strange glow effect inside cockpit. It may not be a problem for the majority of online players, interested only in daylight dogfights in a clear blue sky, but I am playing with (offline) radio navigation at night time, and night now is very, very ugly.”

While several on the TF forum have asked to have the reflections turned down, or off, others such as 14./JG5_Droz have praised them, “As a real life pilot, I can tell you that the reflections in game are absolutely realistic. I can’t tell you how many times I’ve caught sun reflections off of objects that have just the right angles to give that sun glare off of. These objects have been up to 10, sometimes 15, nm away from me. On especially clear days, at higher altitudes, it can be even further out. I very much like these reflections. Excellent job. Tall high rises and skyscrapers are especially susceptible to these light reflections. You only need a very specific angle from an object to get the glare, and this object can be miles away and you will still see it. Heck, I remember during my initial training one day, I was out doing steep turns and actually used the reflection off of something in the distance as a point of reference.”

Once again, this discussion could be resolved if the effect was made optional, at either player and / or server level.