IL2CoD allows the player to adjust the level of weathering on their aircraft. But in the stock version, even the lowest weathering setting does include some weathering of the paint, and exhaust stains on the cowling. In the TF mod, setting weathering to zero completely removes all weathering and delivers a factory fresh paint job for your enjoyment. It is purely a matter of taste whether you like the new look, but unlike other graphical changes like reflections, you can adjust this one to suit your preferences, and I think it is nice to have it as an option. You can get back to the old look by adjusting the slider in the customization screen for your aircraft.

Sokol1: “See my previous comments. A big low for me in this patch is the ‘plastic’ effect in aircraft paint, which has an excess of brightness.”

The images below show a Bf109 with and then without weathering. Unlike the new reflections effect, the weathering is fully adjustable. 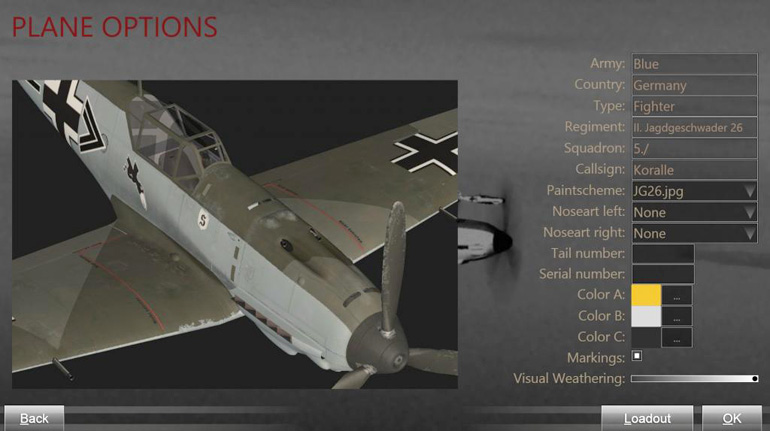 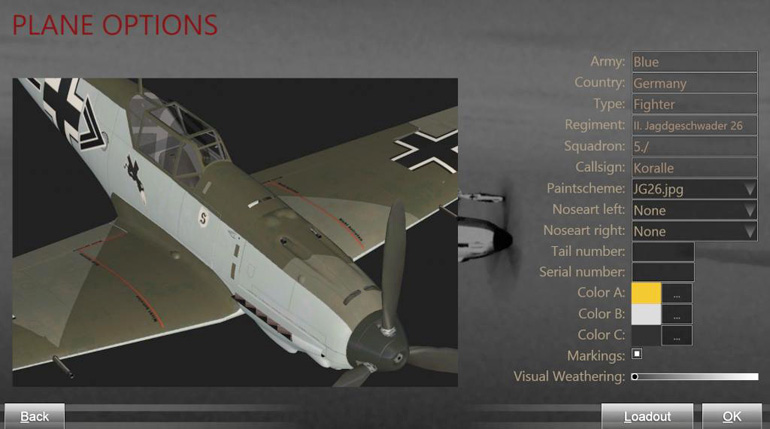 One of the side effects of flying at 9,000 meters / 30,000 feet is that aircraft leave contrails in the right conditions. In the modded IL2CoD this occurs from about 6,500 meters upward and pretty much independently of whether the sky is clear or cloudy. These can look quite spectacular against a deep blue sky, and mirror very well some of the better known photographs of aerial combat from WWII. They can also be an aid to spotting enemy aircraft, because contrails are often visible before the aircraft themselves come into view. A nice addition to the game. 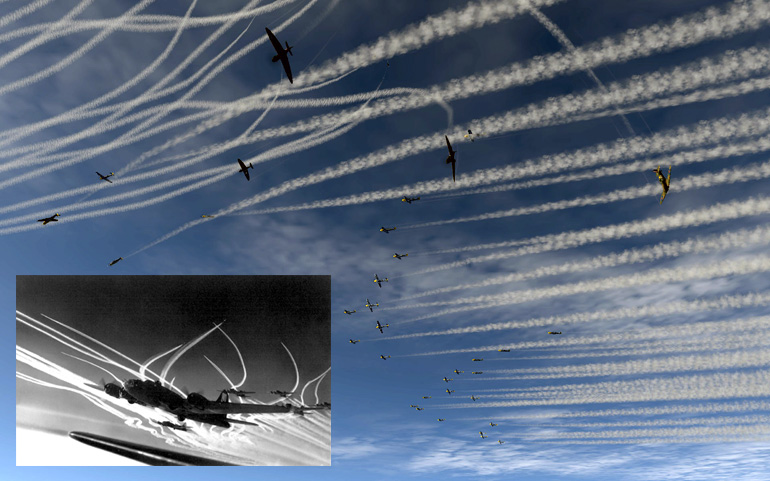 Images like the WWII inset photo are now replicable in the Team Fusion modded IL-2 Sturmovik: Cliffs of Dover.

“The (insert sim name here) landscape is too green / not green enough / doesn’t look like that in real life and I should know, I live there…” These comments are typical for any flight sim release and IL2CoD has been no different. Team Fusion has put a lot of effort into remodeling the British landscape to reflect some of the complaints about the landscape colors in IL2CoD, improve shadow effects, and to reduce framerate hits caused by the landscape.

It is subtly different, but I like the new look and as Sokol1 has referred to above, the implementation of shadows is an improvement.

There have been multiple corrections for historical accuracy. Labels in cockpits, instrumentation, even pilot uniforms have been given a thorough work over with a list of corrections too long to include here, all intended to make these elements as historically accurate as possible. For the enthusiast this type of dedication is always welcome.

Finally, in any big undertaking of this sort, it should be expected that there are some issues that still need to be ironed out after release. For the Team Fusion mod, these issues have been very limited and the mod seems stable for most players. The team has been very quick to give serious attention to issues which could be game stoppers and help players who have issues. For example, within days of identifying an issue which prevented AI flights from taking off on some player PCs, Team Fusion found the problem was a particular Windows .NET update, and issued a hotfix.