Owners of the Flaming Cliffs 3 module got a gorgeous new exterior model for their Su-27 and a dedicated campaign to go with it. I’m only two missions into the campaign, but I’m impressed with the level of immersion. Although there are those out there who will cringe when they hear that the first flight is a “mere” familiarization flight, I enjoyed the intro and guided tour of the area. I’m really looking forward to completing this series! 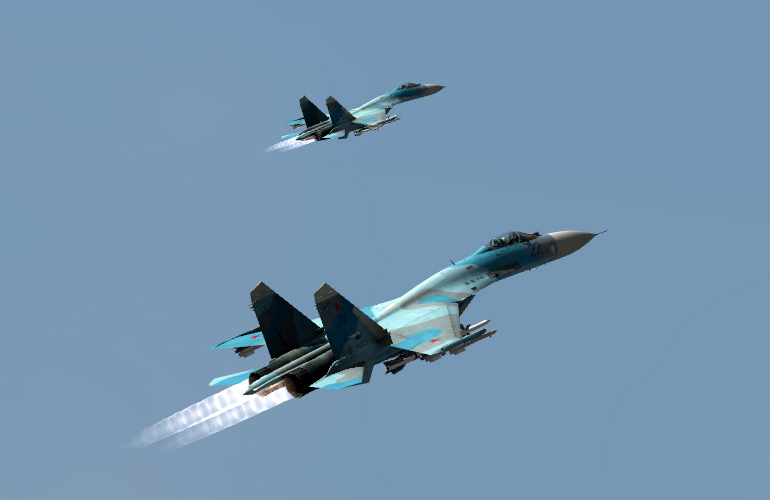 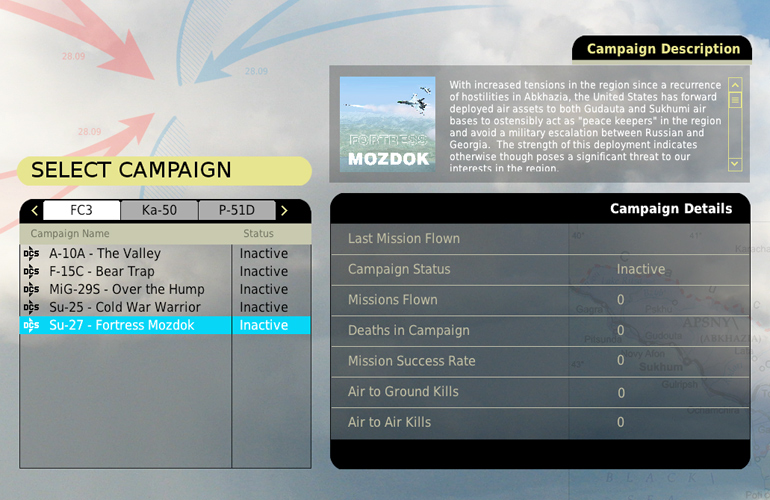 Simultaneous missile launch capability of the MiG-29s was a touted feature of FC3 v1.2.3, but, unfortunately, a working version didn’t make it in the shipped version of 1.2.3. I would expect to see it in the next auto-update, however.

DCS: Combined Arms no longer bears the “beta” tag in the modules download page or on the DCS World 1.2.3 GUI. Does this mean it has been released? Or just not beta? The lack of any announcement on the subject makes it pretty unclear, but, regardless of its status, the module received a healthy dose of updates in 1.2.3. If you were on the fence about DCS: Combined Arms in the past, you may want to take another look at it now. One of the items, a health-bar for ground units, brings back fond memories of my StarCraft and Command and Conquer days, but this isn’t really what I was expecting for a high-fidelity (aka DCS-level) simulation engine. It’s true that the DCS: Combined Arms module has never been touted as a gritty ultra-realistic ground war simulator, but life-bars seem a touch… “arcadish”. Give me mobility kill, firepower kill, graceful degradation in performance…not a life-bar. The life-bars can be hidden from the F10 map with a click of an icon. 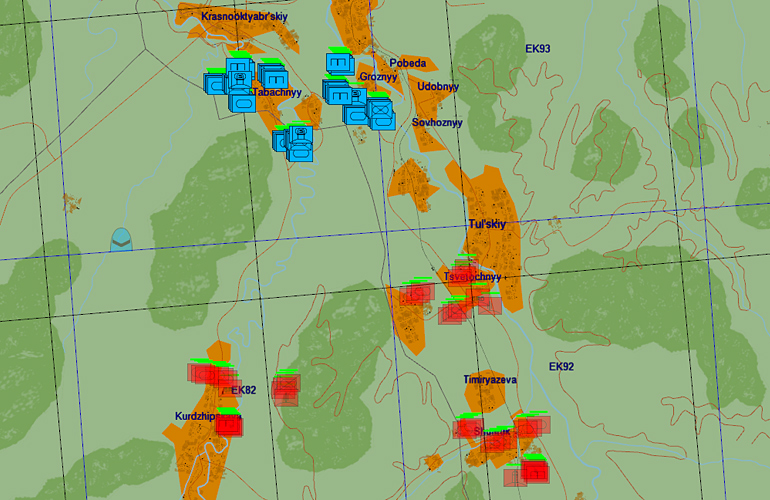 The ability to control air assets is a major addition to DCS: Combined Arms, bringing another dimension under “combined” control. That control is admittedly limited (setting waypoints, selecting targets to attack, formation, speed, defensive state, and ROE), but an intelligent tactician can wield this power to great effect – a fact I have failed to demonstrate in the many provided single player missions, but still a fact. 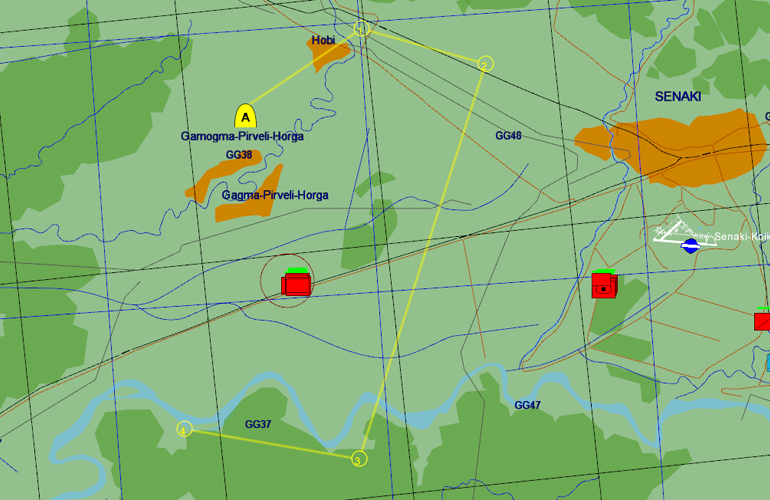 …and a close-up of the control bar.

The new resupply feature in DCS: Combined Arms is nice. Get within 100m of a cargo truck, press left alt and the single quote key [‘] and presto, full ammo. There’s no resupply delay, which is also a little bit “gamey”, but it’s nice to be able to resupply a vehicle in the field instead of abandoning it for one with more ammo. Of course this will be easy to misuse in multiplayer: if a crafty player keeps a cargo truck in their formation they will have an infinite supply of missiles to lob at other vehicles! Fuel still doesn’t seem to be an issue in DCS: Combined Arms, but then, I haven’t kept a unit alive long enough to test it out!

A feature I really appreciated is the turret azimuth lock. The default behavior of the turret is that it remains in the same position relative to the hull; that is the gun turns with the vehicle as it maneuvers. With the new azimuth lock feature (toggled with the “v” key), the gun will attempt to stay pointed at the same azimuth (i.e., compass heading) as the vehicle turns. The control has a pretty significant delay, but this makes it much easier to keep putting rounds on target while jinking and dodging, making running and gunning a little more feasible. 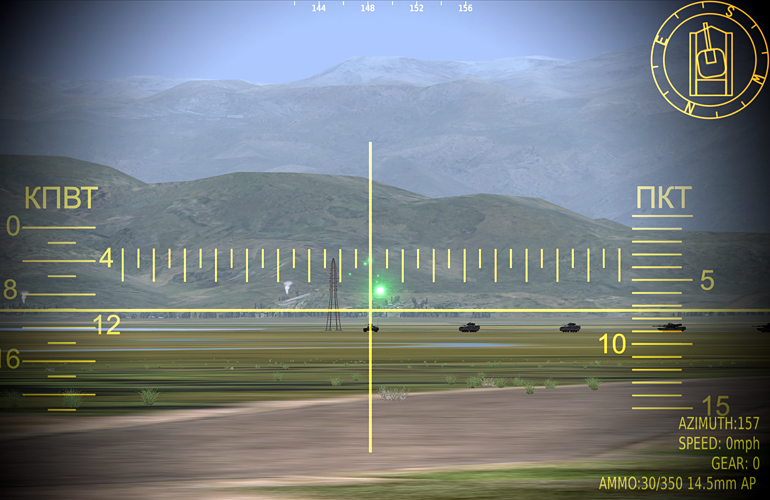 Not only does DCS World 1.2.3 whet our whistles with respect to multiplayer gameplay, ED has upped our anticipations even further by mentioning the development of new aircraft in their official DCS World overview video. 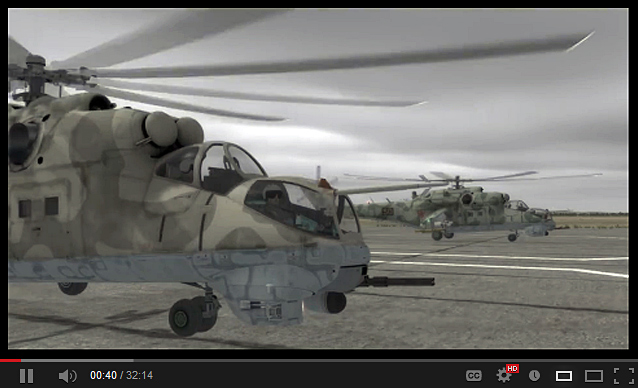 This will be especially impressive if these platforms will be modeled with the same integrity and attention to detail as the Ka-50, A-10C, and P-51D study models. Of course, with the long delay in releasing some of the more anticipated updates, like the Nevada terrain, it’s hard to get too excited about flying any of these aircraft anytime soon. It’s also not clear which modules will be produced by the tried and true ED developer staff and which will be delivered by a third-party “partner”. Call me skeptical, but I think ED has set a pretty high standard that not all software developers will have the patience, technical skill, or budget to meet.

There have been some other changes to DCS World that I’m not sure I understand: sometimes, in my A-10C, the TGP diamond doesn’t appear on my TAD and the solenoid on the EAC Arm switch is always enabled. In DCS: Combined Arms, my vehicle always comes to an instant halt if I engage the autopilot, no matter what speed I was going at before. All in all, though, I have yet to find any serious issues with gameplay in DCS World 1.2.3, and I fully believe the bug team at ED is busy wrestling down these and many other bugs, but these seem like awfully odd changes to suddenly pop up.