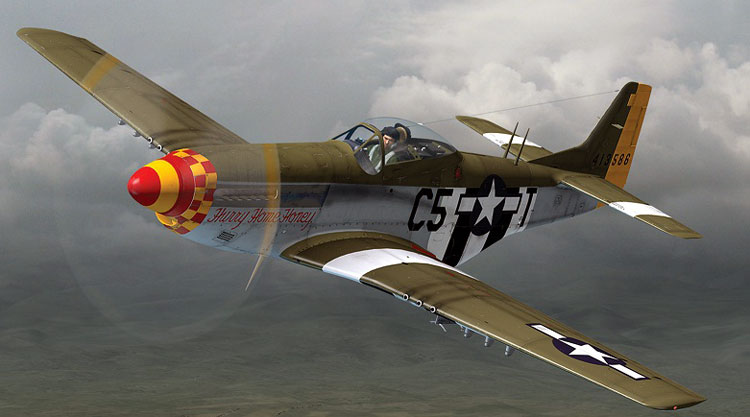 The recently released Eagle Dynamics DCS: P-51D Mustang module for DCS World has the capacity to both delight and disappoint, depending on how you approach it.

If you go into the sim hoping to be able to fly the Mustang in a fully realized WWII combat sim, you are in for a big disappointment. It simply does not deliver on that expectation.

But if you go in looking for a relatively inexpensive, full simulation of the Mustang almost as good as anything you will find for Microsoft FSX, you will be happy.

A love affair rivaled only by the Spitfire

Full disclosure here – I have an unnatural affection for the P-51D. To me it is the ultimate prop driven fighting aircraft and yes, an even more beautiful machine than the legendary Spitfire. While the Spitfire may be the machine I would go home to each night, the P-51D is the babe I would prefer to party with.

So any new attempt to bring this type to the virtual skies raises the hairs on this reviewers neck. And doubly so when it is brought to us by a solid sim stable like The Fighter Collection and Eagle Dynamics.

To quote the DCS P-51D manual, “The P-51 was the first aircraft of the war to be built entirely on the basis of combat experience. Its design was started by North American Aviation (NAA) after the Luftwaffe had begun to overwhelm Europe – and many lessons had already been learned about modern aerial warfare from actual experience… The P-51’s were the first American-built fighters to carry the war back across the English channel after the battle of Dunkirk. A short time later they would set another record by being the first single-engine planes of any country to penetrate Germany proper from bases in England. So successful were the powerful little Mustangs that the United States Army Air Forces (USAAF) decided to adopt the aircraft for its own use… The P-51D version of the Mustang retained all of the great features of its predecessor, with important added improvements. Chief among these are the increased visibility for the pilot in a new ‘bubble’ canopy, more convenient cockpit arrangement, and heavier firepower with six .50-cal machine guns fitted in the wings…Becoming the definitive model of the Mustang during World War II, over 8,000 P-51D airframes were produced. As the war drew to a close, P-51s were active not only in the European theatre, but also in the Mediterranean and in the Far East, where, like in Europe, the aircraft’s long range and superior performance made it the ideal escort for bombers running missions into the heart of Japan.”

What isn’t to love?

But if you are new to the DCS platform, you first need to install the free DCS World game environment where all DCS modules, like DCS: P-51D Mustang run. This one time install is somewhat of a pain. First you need to separately download the installer file (1.9MB) plus 3 rather large .bin files (1.86GB, 1.86GB, 1.44GB) needed for DCS World. Then you need to buy and download the DCS: P51-D module (367.78MB). Time for me to achieve all these downloads on a 20MB broadband connection was 45 minutes.

Finally you are ready to rock and starting-up DCS World you are greeted with the Main Menu.

The digital download gives you a nice 184-page PDF manual covering the history of the Mustang, detailed aircraft walkthrough and startup, flying and weapons procedures. Nothing out of the ordinary, but nothing missing either – a very thorough manual. You can download the manual here. 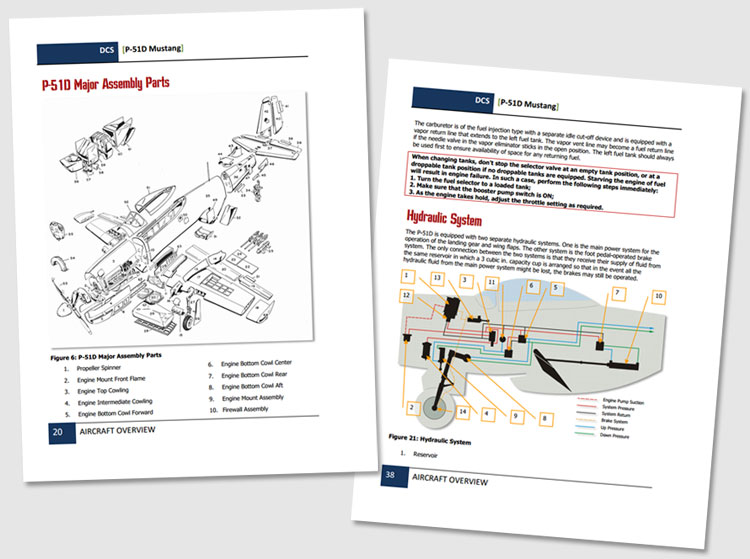 The DCS World platform is nicely customizable and kind on PCs. I was able to run the sim on relatively high settings without noticeable FPS slowdowns during combat. There are extensive key guides and pilot “kneeboard” style notes for preflight, startup and landing. 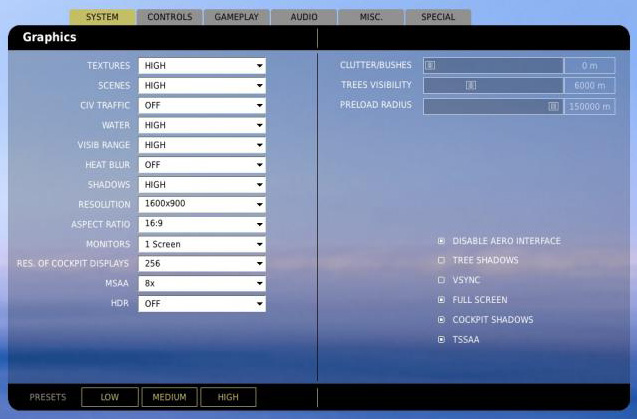 The difficulty is also highly scaleable – you can choose full simulation, or “game” modes, and each is totally customizable to give you a blend of the two if you wish to use some helpers and avoid others. 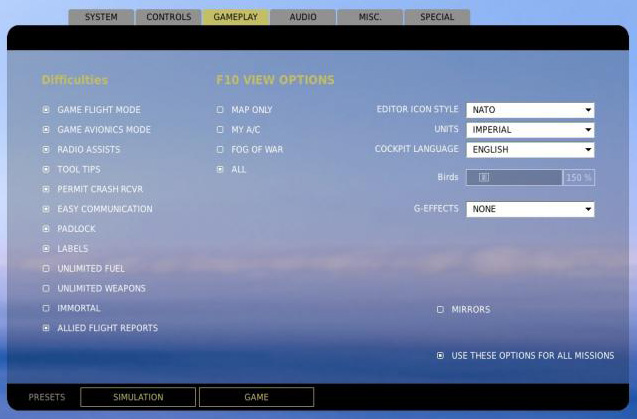 Controls are of course totally assignable, and the game supports NaturalPoint TrackIR. 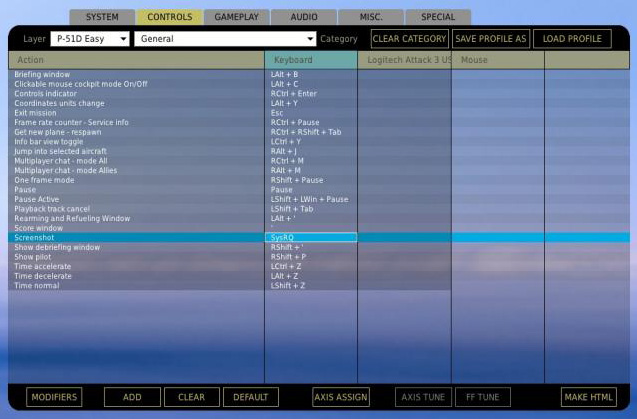 On the left there is a DCS News window, which you can minimize, and clicking on your preferred aircraft gives you a context sensitive menu. In this case the P-51D module offers you the following range of gameplay options. 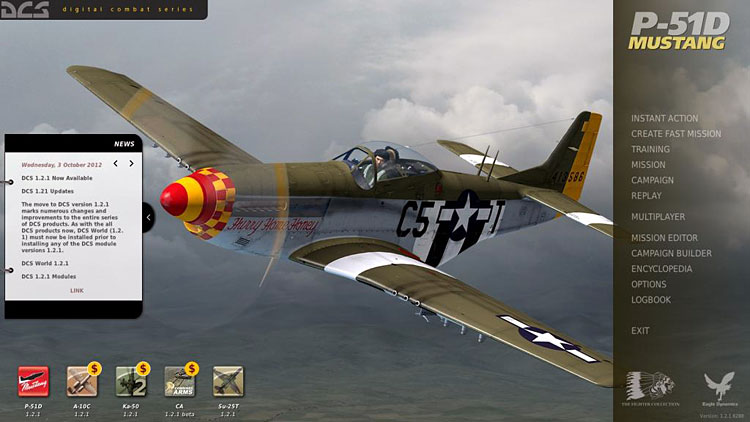 Main Menu with the News window

What if we don’t think of this as a WWII combat simulator?

I gradually realized I would need to look at this release through a different lens than I had expected. I had wrongly anticipated a WWII combat sim. No, DCS never promised a WWII combat sim, but rather a P-51D Mustang in the DCS environment – which they delivered.

But it’s a fair point that the lack of WWII environment (targets, enemy aircraft, period-representative textures, etc.) is disappointing, and that the P-51D sticks out like a sore thumb in this modern military combat environment.

But what the DCS: P-51D Mustang really is, is a nicely realized high-fidelity Mustang flight simulator, which allows you to shoot and blow stuff up.

It makes no sense to start this review by looking at the usual combat sim type elements, such as instant action, campaigns and online dogfighting.

So for the next part of this review, let’s look at the DCS: P-51D as an aircraft simulation, and compare it to what I consider the peak Mustang offering on the FSX platform: the A2A Simulations Accu-Sim P-51.