Okay, but what about the DCS: P-51D Mustang as a combat sim?

Having just spent the previous page explaining why you shouldn’t think of the DCS: P-51D Mustang as a combat simulator, I know many will still want to know why. So I will quickly run through the combat options in the Main Menu.

There are seven instant action missions included. These are very limited in scope, and range from free flight, takeoff and landing scenarios, to three combat missions. Now, remember the DCS World is a post cold war jet jockey environment with two former USSR foes facing off against each other. No new content was created specifically for the P-51D in this world – you are limited to the same post-Soviet era map, ground objects and enemy aircraft. This is why the Instant Action menu reads more like a training menu, with more than half the mission actually involving no “action” – not even in the form of engine or system failure simulations. But in fairness, lets remember theDCS: P-51D Mustang developers did not promise a full WWII combat sim experience. 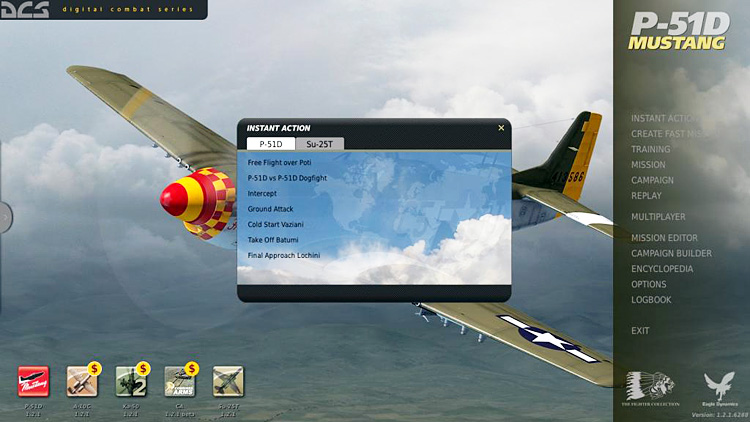 Nonetheless there is some enjoyment to be had in the Mustang vs Mustang 1-1 instant mission. The AI appears to be quite a competent opponent. Many forum players have complained the AI does not seem to follow real world rules of physics, but I found it a fair match in “game” mode. 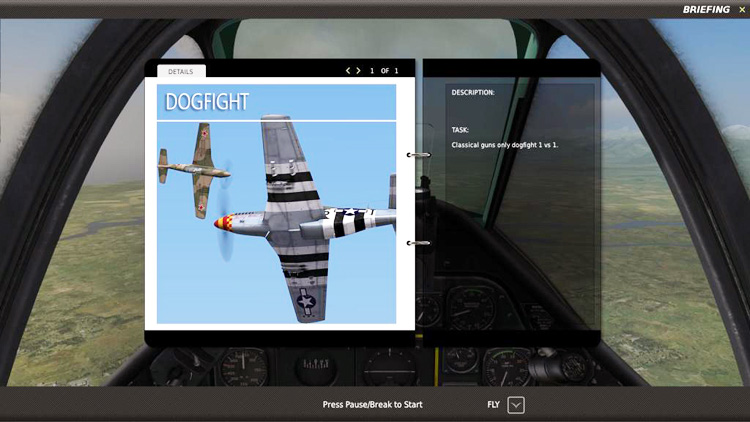 Unfortunately, the “game mode” seems seriously flawed. In one dogfight I got my wing shot off, caught fire, and was still able to maneuver as though it was still there! 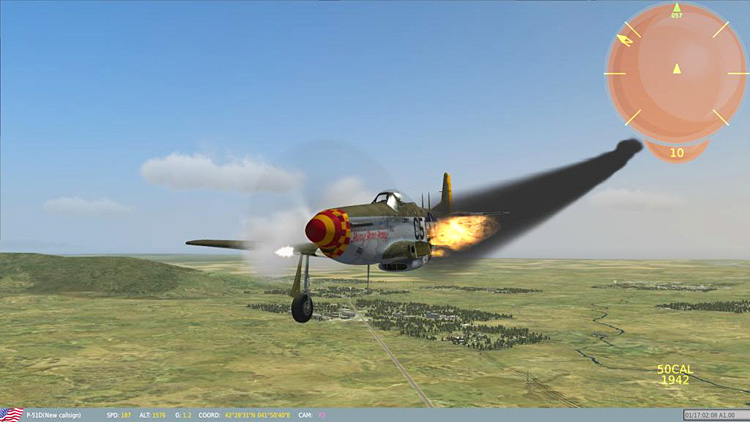 I could lower my (remaining) gear and bring it down for a rather nice one point landing in a nearby field. 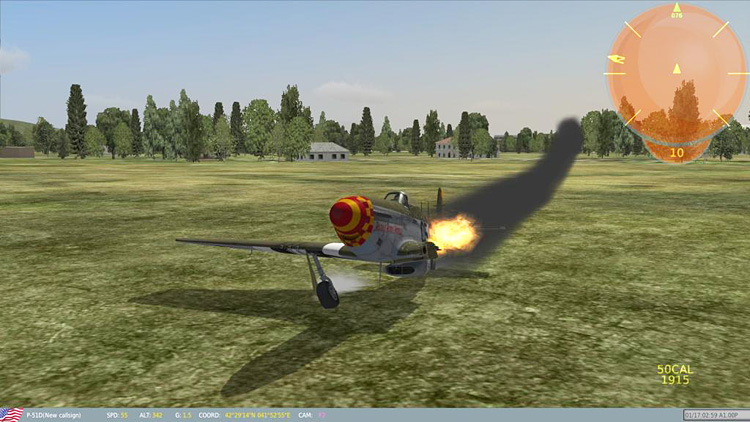 In “simulation” mode I didn’t experience similar bugs, but I was simply unable to compete against the AI on what I believe was a believable and even footed basis. Perhaps it was just my poor piloting skills, but I was unable to find any control settings which meant I could comfortably fly the Mustang to the edge of its envelope without it flick rolling. This was made harder by there being no feedback indicating the machine is on the edge of a stall (though it is believed stall buffeting will be included in a future patch). The AI however seems to suffer none of these limitations and I never once saw it spin, flick roll or stall.

This option seems more promising, as you can set up a flight of up to 4 P-51Ds, led by you, and set them loose over the battlefield against multiple enemy aircraft. 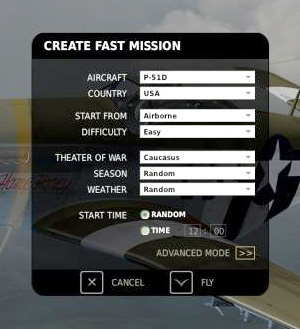 This provides some fun, as long as your idea of fun is fighting in a .50 cal armed Mustang against fast burners and modern choppers armed with missiles and laser targeted cannon.

Fast missions (in simplified game mode) play out like this:

You start in the air over your own lines in a Mustang in the livery of your chosen “Allied” nation, in this case Canada. 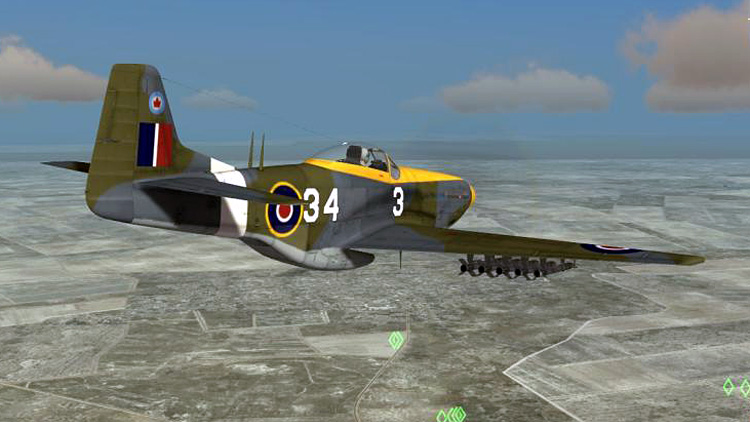 The in-mission map shows your own forces, your aircraft (in white) and your wingmen. In “game mode” you can also see enemy targets, they are marked by on screen identifiers and labels (all customizable and not available in sim mode). 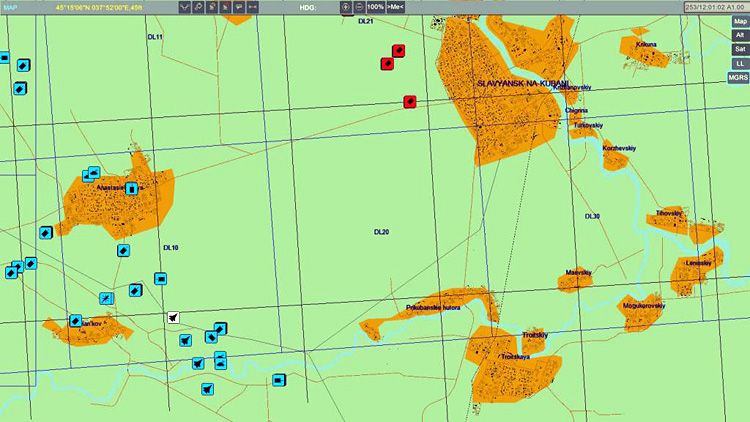 You close on your targets, arm your rockets and… 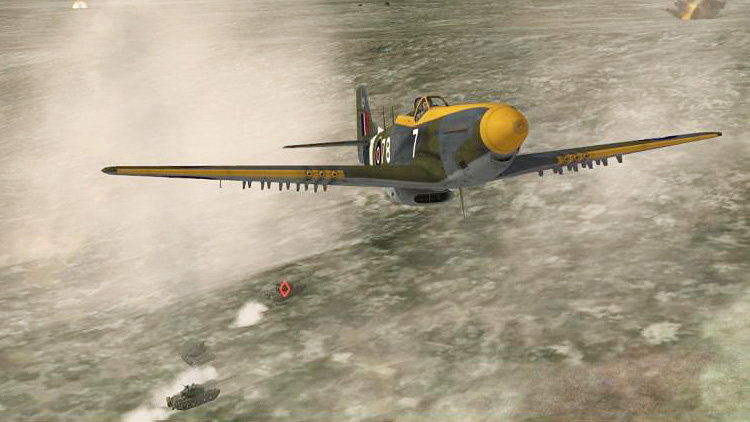 You learn that WWII unguided rockets are pretty useless against T-80 tanks. If you want to destroy something, I guess you could attack the soft vehicles like the trucks.

Let’s turn our attention to the skies. We won’t want to get close to any of the fast movers, but perhaps we have a chance against the rotary winged jobs? A better pilot might. What I learned is that in the battle between .50 cals and iron sights against the laser guided cannon firing from a platform that can pivot on a dime, there can be only one winner. Ouch. 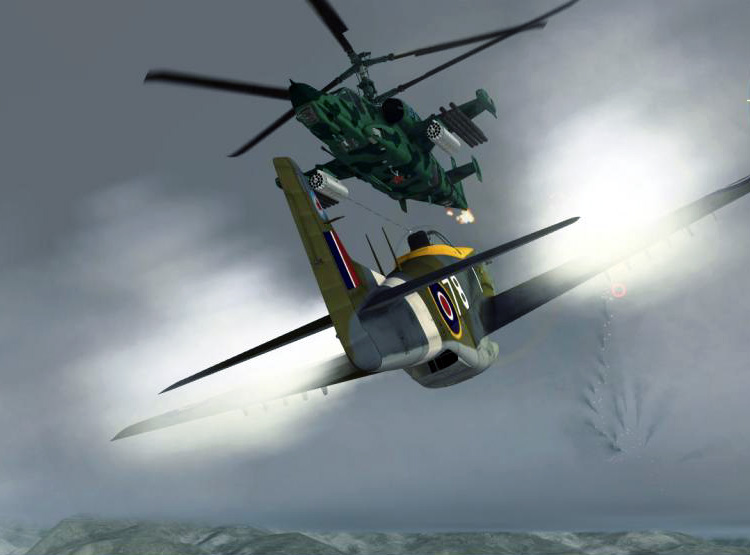 The training section is well implemented, with a voiceover trainer walking you through every inch of the cockpit and every step of starting the P-51D, getting it rolling, getting into the air, and getting it down again in one piece. I can’t fault this part of the game at all and really enjoyed using it to get reacquainted with the Mustang. 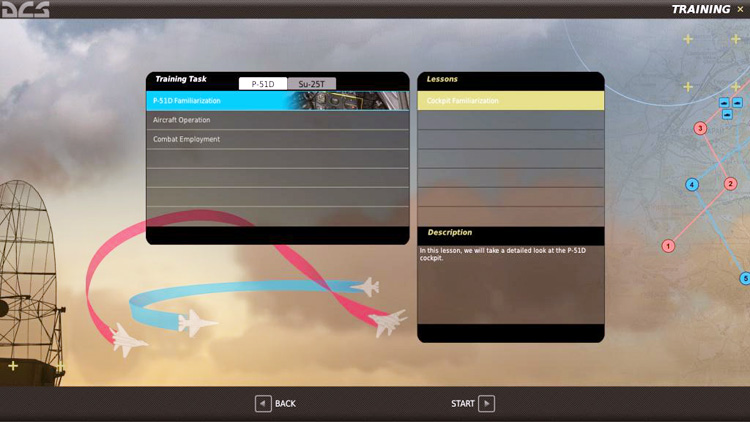 The single player missions are pretty limited, but they do include an intercept mission plus a close air support mission.

The campaign should actually be considered an extension of the training program. Most of the “missions” in the campaign are non-combat, and are designed to just test your flying skills a little more. 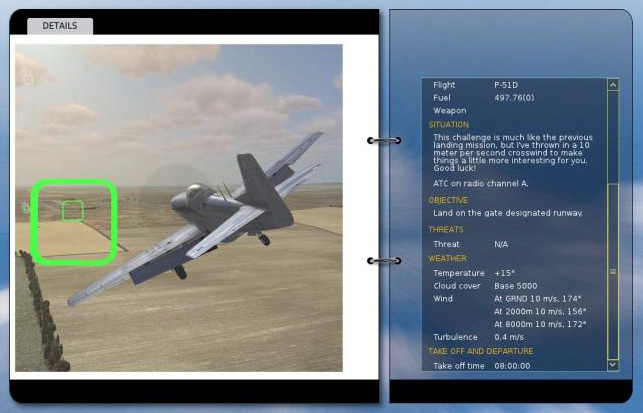 As already stated, this is not a combat campaign. It is more of an extension of the training program, without the voiceover and help from the AI trainer.

By way of explanation, let me show you the briefing screen for the first mission of the Mustang campaign.

Your first mission of the campaign requires you to… taxi.

Once you reach the runway, it is mission over.

The next mission requires you to… take off. The one after that? Takeoff again, this time with a 10 knot crosswind. Then land. Then land with a crosswind… you get the picture.

Compare this however to the first mission of the free Su-25T campaign included in the DCS World download.

The Su-25T’s first mission is a true combat mission providing CAS for an armored push on enemy positions. 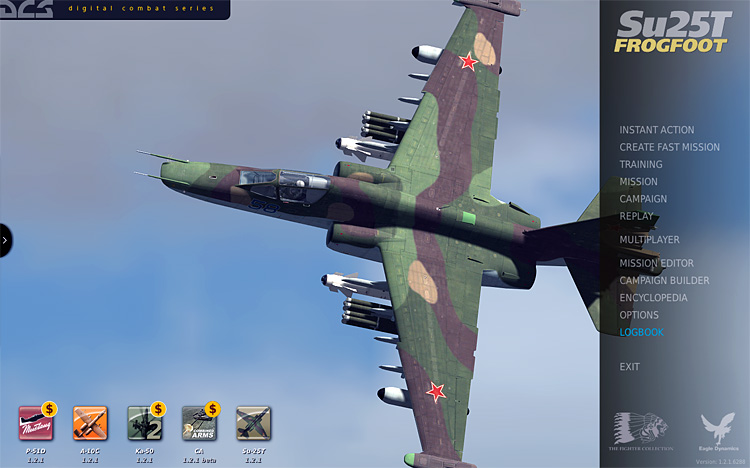 Slight difference? Yes, and this is what happens when you introduce a WWII aircraft to a 21st Century environment without changing any other game elements. It becomes nigh impossible to create a meaningful campaign to go along with it.

Your first challenge in going online in your Mustang is the DCS World interface. The list of servers cannot be filtered for the those containing the DCS: P-51D Mustang. Most of the servers available are actually for jet jockeys, not Mustang flyers. You can only find this out by clicking-in and -out of them.

Non-password locked servers which include the P-51D seem very scarce. But when you find one it is relatively easy to log in and get flying. You just click on an empty P-51D aircraft slot on the side you wish to fly for, and off you go. 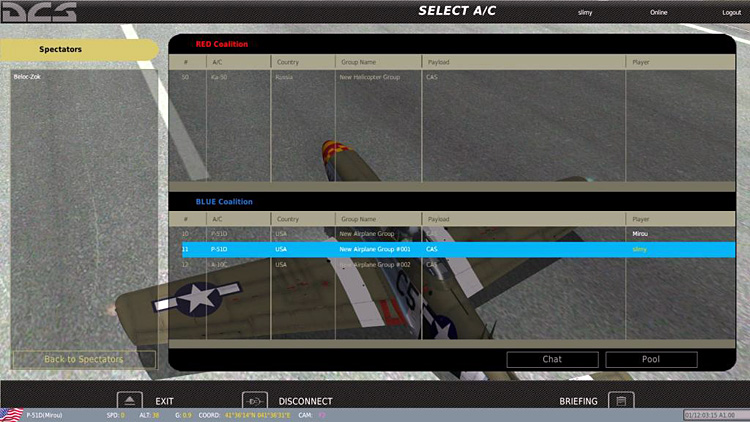 I was able to find one server offering simple P-51D vs P-51D dogfighting, another offering an “air show mode” where you could cooperate to practice and perform aerobatic displays, and one (terrible ping, but I was able to at least get a look) which offered a simple mission with ground targets suitable to the P-51D and had several people flying. If these options interest you, I suggest you go to the SimHQ DCS World forum and ask to join a dedicated group who you can fly with. There were also servers which included the P-51D in modern combat missions, for the masochists out there who want to practice their parachute technique I assume.

Again, the online game for the DCS: P-51D Mustang seems very limited and all in all you are left with the feeling this aircraft is a “test bed” for DCS.

Having slotted one nicely modeled prop aircraft into the DCS World, we can only hope they can now expand that world to maps and objects suited to this era, and start adding other WWII warbirds.

The DCS promotional text says the P51-D module features, “A powerful yet easy-to-use mission editor (which) allows you to create your own missions and campaigns. A one-click Mission Generator also allows you to instantly create battles as small or large as you wish.”

While this certainly seems to be true, at the moment there seems little for mission builders to do. It is possible to design P-51D friendly environments with truck mounted AAAs, Urals, UAZs, and other “soft” targets, and there are structures to take out, but even keen mission builders are relatively limited even though the Mission Editor and Campaign Builder are capable of much more for modern aircraft.