What the hell is this? Pokeman for flight geeks?

That is the first thing that popped into my head when my squadron mates in my Aces High group first started discussing this game.

Well, what it is; is a highly intriguing new game from Dan Verssen Games (DVG) published byBattlefront.com. I have to say that Down in Flames is one of the more unique concepts brought to the computer. 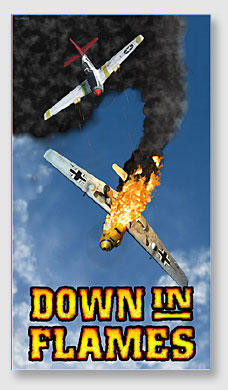 Not quite a wargame and not really a simulation — what you have here is a combination of the two genres into a game that tests your combat flight maneuver ability and knowledge without grabbing a joystick or buying rudder pedals.

The game originally started as a WW1 based tabletop game. The game changed from the First World War to the WW2 during its development and has been released as a very successful card based game. With the help of Brian Marrs, the game is being converted to a computer format. While the original, card based games were broken down by period (early vs. late war) and and theatre (Pacific vs. European) DIF Online is one game with all the components placed together.

Battlefront is a good match for this game. The producers of the game have a great track record with the Combat Mission series, one of the best wargames ever made and considered by many to be required ownership for avid wargamers. A perfect example of a great small production house; Battlefront has had the vision and the fortitude to help create some of the better wargames on the marketI have had the opportunity to run the beta version of the game through its paces. It currently is in Beta and should be available soon. Right now I am unsure about the availability of the game in stores; for the most part these games can only be bought online. Judging from what I have seen so far, as well as the history with the Combat Mission series I am confident that they will fill most people’s needs.

Down in Flames Page 2

Down in Flames Page 3

Down in Flames Page 4