How deep is the well? And how many times can someone go to it?

Pretty pertinent questions when you look at a flight simulation that is now going on three years old. It is hard to believe but the IL2 engine is now almost three years old. In its life span is has developed from a primarily Eastern Front simulation to a game that encompasses many of the western planes, and lately, with the Aces Expansion Disk, some aircraft from the Empire of Japan. These additional aircraft, campaigns and visual improvements have added longevity to a game that should be coming close to its practical life span. 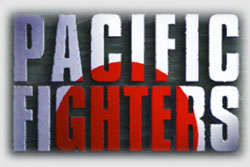 Not to rest on its laurels, Maddox Games, with the help of such notable people as Ilya Shevchenko (aka Luthier) have put together what may finally be the crowning achievement of the series. Pacific Fighters looks to be more than just another add on to the venerable IL2 franchise, it looks to build upon the title to create a simulation of massive appeal.

One of the biggest problems with the IL2 franchise has been simple name recognition. While considered one of the best combat flight simulations ever made, IL2 has generally flown under the radar of many mainstream gamers. Flight simulator fanatics generally acknowledge the brilliance of the series which has resulted in decent sales and a cottage industry of add on skins, missions, campaigns, and utilities. Pacific Fighters will continue this trend for sure.

Air War in the Pacific… Finally

Ok, Pacific Fighters is not the first flight simulation that simulates the fighting over the Pacific Theatre. It isn’t even the first in recent history, Microsoft’s Combat Flight Simulator II holds that honor. CFS2 was a decent game, an adequate simulation and in many respects filled the void that many of us wanted when looking for a simulation of the combat over the Pacific.

Unfortunately, in many ways it didn’t accomplish what many of us wanted. The scripted game play turned a lot of folks off. The flight models were suspect on some of the aircraft. While the game looked good, it just seemed to miss some of the soul that people expected from the game. It was a decent attempt, but for many it didn’t eclipse the two simulations that are considered the gold standard of Pacific War simulations — Aces of the Pacific and Pacific Air War.

Does this game finally take the place of games like PAW and AOTP? Well that will be to each individual to decide but the game does go a long way to finally combine the thrill of the older sims with the graphic and flight model fidelity that we want for modern times. It may not thrill everyone, people that don’t like the IL2 series probably will find that this feels much the same but for those of us that have loved the game will certainly enjoy the new features.