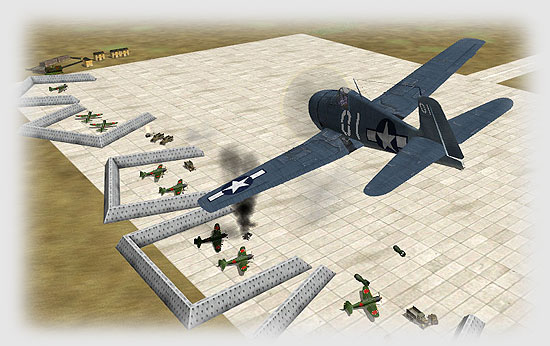 Ok, how does it feel?

Well, I have found out quickly that I can’t land on a carrier to save my life. All that practice in Warbirds and Aces High probably helped some but I still tend to plant my aircraft into the back end of the ship a lot. I suspect a lot of people will eat the back end of a carrier several times in the game. In addition I suspect a lot of people will torque themselves off of the carriers. This game is going to be hard, very hard for the realistic minded. Of course, like the original series, everything is scalable. You can turn off the cockpit, remove the torque and crash much less often. In addition you will also get the opportunity to move your seat up in planes like the Wildcat and the Zero, which will make landing a little bit easier. This feature hasn’t been enabled yet but will be welcomed.

Flight models feel a lot like other IL2 games. The F4U is a beast, fast, tough and capable of carrying a LOT of weaponry. The Zero is nimble, very sweet to fly and falls apart easily. The F6F is probably the most fun aircraft in the game. I absolutely love flying it, it is fast, maneuverable and accelerates wonderfully. The aircraft that I have flown feel roughly equivalent to their real world contemporaries but I am sure there will be some arguments when the game comes out.

The game shows the stability of the series, I have had no crashes or any other unusual problems with the game. Of course all the features of this game aren’t present yet but right now the game has more features and more solid game play than any other Pacific based flight simulation.