Once the aircraft was ready to go, I had saluted to Sgt. Gennedy and taxied gently out of the hangar. A 586th aircraft taxied by me, seeming to be taking forever. Damn, I wished they would not be so slow! I waved for him to move, but he thought I was waving at him, because he waved back! Fool, move! I thought of Major Grachev as that rodent of an airplane finally taxied to it’s hangar area. I taxied as usual, the canopy open with the evening sun filtering in. I positioned my aircraft on the start line, and toggled the tower.

“This is Tower, you are cleared for takeoff.”

“Spasiba.” I said quickly as I pushed the throttle forward. 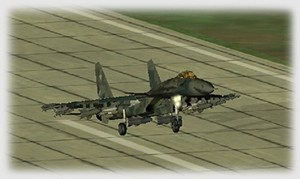 Some people consider afterburner takeoffs “flashy”, but if you are loaded down, then I would suggest you use them! The aircraft leapt down the runway. After reaching takeoff speed, I had pulled the stick backwards, and the nose rose, and I was shortly airborne. Retracting the landing gear, I let the aircraft go forward to build up speed. The aircraft handled pretty well for the weapons configuration I had selected. I shall remember this for future operations. Instead of flying the route, I had let the autopilot do it. Not much happened comrades, only that I had checked the AWACS Link-16 that my aircraft can receive. It showed a single bandit SE of my position. I switched to the internal frequency that our unit used, not the main one. 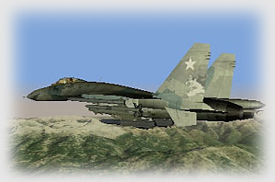 “Gorkiy, this is Nevsky, outbound, have one hostile SE of my position, will monitor link.”

“This is Gorkiy, sure that you do not need my assistance?”

“Roger.” I kept the internal open, and had just let the aircraft fly itself while I pulled out another snack. I was slightly excited about this one. I would now be facing a possible fighter, and have a good attack for tonight. I thought to ask the AWACS the position, just to verify. As I maneuvered the aircraft, I heard Dimitri come over the internal.

“Gorkiy, this is Pushkin, wheels up and heading towards target area.”

And that was all I had heard of Dimitri.

Major Grachev of course monitored the tower frequency, and requested taxi permission. Once it was granted, he advanced the throttle to a good taxi speed, then guided the aircraft short of the runway. He was positioned so he did not interrupt the normal flow of traffic, right directly at the start of the runway. He stopped, and the tractor backed him up, after positioning his aircraft. Once it was connected, he shut off the engines. He then opened the canopy, and switched to the tactical frequency. No need to talk unless he had too. He then pulled out a book and began to read/monitor the radio. He was experienced enough to do this, plus the rank to keep people off his back.