The British sounding Russian came over the radio.

“Nevsky you have one bandit SE of you, closing, hot.”

I would just let fate intervene as far as the fighter. I do not have the fuel to be messing around too much with enemy aircraft. Perhaps he will turn away, and possibly deprive me a kill? I will see as I sipped on some apple juice. I noticed before reaching Waypoint 1 that the Nav system was not functioning properly. I was not heading directly for Waypoint 1, but merely to the “left” of it. Grunting, I took control of the aircraft, and pointed it SE, so I could get the aircraft to perhaps think it had to be pointed in the right direction. But again I cycled the autopilot and it still was working not to my liking. Sighing, I disabled it, and flew manually. Besides, I have a fighter inbound, and I must have some control over it. The aircraft continued in the general flight path. Perhaps there are spies all over Russia looking for me. There is that possibility of course.

Lieutenant Ahmed Wal Abid marveled at the aircraft he piloted. The French made aircraft was very comfortable, and alot better than the F-4 Phantoms that he used to fly. He had been selected to fly this aircraft, in hopes of testing the capabilities. They were aptly demonstrated, but the infernal female pilot had shot them both down! He hoped Allah would not let those two pilots into Paradise for their lack of skill! To be shot down by a female was most degrading and even his squadron mates joked that since he flew this aircraft, that he make sure females do not shoot him down. His mission was to intercept any aircraft in their airspace. He wanted to shoot down that infernal Su-33 that seemed to magically fly through their defenses. It was causing major headaches for the higher command, and they wanted it dead… now. They had no problems with the Georgians. They could handle those barbarians, but that Russian pilot was crippling them. Even the normal Russian air force was no problem, except those oddly colored Fulcrums. He thought it was odd how the glasnost had changed the country. Now they were almost like the Great Satan. Though he had is views on Western philosophy, this was one he had no complaints about. They said that the aircraft he piloted was almost like the American F-16C. He thought maybe it would be interesting to fly that aircraft. Even though it was an enemy fighter and he had seen none out here.

He continued NW, searching the barren sky. It was sometimes full of aircraft, sometimes not. It was the ground action that was where it was at. But he didn’t consider becoming a soldier, he liked flying marvelous jet fighters, and so what if he had to strike down the enemies of Allah, they were too corrupt to have emotions anyway. Abid decided to increase the gain on his antenna, and see what he could find. Ah! A single jet! And for the luck of Allah, it was coming towards him! He immediately went through the procedures for arming his aircraft. The MICA AR missiles on the fuselage were reporting a green status in his MFD, as well as the two Matra 550 short range AAMs.

“Scorpion, this is Adder.” He said somewhat excitedly.

“Adder, calm down, what is it?” Asked the bored controller.

“Scorpion, I have one contact bearing NW, confirmed hostile.” It had to be, what else was flying today?

“Standby.” He cursed as he maneuvered the jet towards the contact anyway. He could always say he fired in self-defense….

“Adder, Scorpion, you have permission to engage the fighter.”

He decided to see the power of the engines, and put it in full afterburner, so he could get in range with his Matra MICA missiles. He monitored the target, which was moving West. He figured an AWACS plane, but his radar also picked up a lock tone. He was being locked on! He however thought it was some new targeting system from the AWACS, and surely a fighter was enroute, and was determined to down this aircraft in his sights before the enemy fighter came upon him. 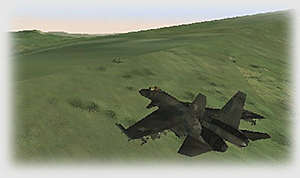 I merely attempted to get by some mountains, but the turbulence was not too bad either. I have experienced it this worse down low. Then Captain Scarlet came over the radio:

“Roger, master arm on.” It is usually on anyway, but I must follow protocol, and such as monitoring the internal! I now had to leave it on. I could not hear Dimitri, who himself was surely near his target area. I waited for this enemy fighter to come to me. I waited until he detected me, and soon enough, he had. When you are configured for a bomber, you must push your aircraft or you will suffer defeat, and I was not the person to suffer it tonight.