I merely went to afterburner to help me get at a higher altitude, and eventually the mujahid aircraft had locked me up! I switched to BVR mode, and selected my R-77s, 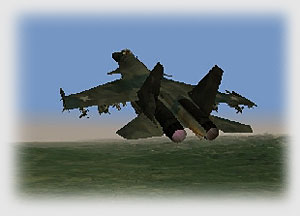 instead of my AIM-120s. I felt a Russian response was more appropriate. I quickly gained altitude, and the enemy aircraft was catching up, slowly.

I had to do was get in firing parameters before he did. If he fired first, I would not have the appropriate energy to dodge his missile, and that is not good comrades. I got the “NP”, waited a few seconds, and fired.

“Fox three!” I blurted in Russian.

Lt. Abid continued to accelerate upwards, trying to get into range for his MICA missiles. He still heard the lock tone, and wondered where the fighter was that was locked onto him. Perhaps it was a SAM and he was not in range? He hoped for the latter. Surely the Russians were not flying tonight. And it definitely could not be the Canadians, as they were known to patrol this area. Their airfield was locked down by a HAWK battery in Suhumi, and the Georgians weren’t known to have air defense fighters.

The R-77 leapt off the rail, and tracked the target. I was within less than 25 kilometers and this mujahid still did not fire! I did an F-Pole as well, it is good for BVR combat. It is better for multiple attackers, but a single fighter can also ruin your day as well. 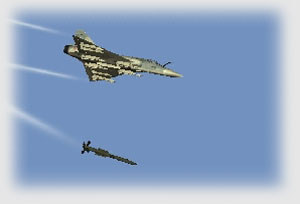 The R-77 flew true, and shot down the aircraft! I had no time to really care about what it was, only now that it was down, and I had a mission to perform.

Lt. Abid vainly tried to evade this missile, angling the aircraft to the ground, hoping it would help in defeating the missile. He saw them do this, and it seemed to work as he hoped he evaded it. As soon as he pulled up though, he heard a loud thump, and his aircraft warning lights came on. He also felt the missile that had been fired at him as he reached for the ejection handle. He was not a martyr. He only hoped that the Russians would not torture him badly when he ejected from the aircraft, a scant 300 meters away.

The Martin Baker zero-zero ejection seat bounced on the ground below him, as well as the remains of his once proud aircraft crashed into the ground. He strained to see the aircraft that shot him down, but saw a dark blur off to the right of the sunset. 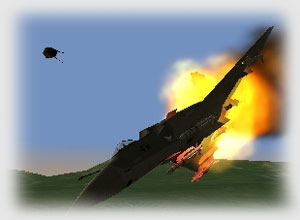 He may never find out. The landing was pretty rough, and he remembered the landing drills he practiced at the airfield. Twenty minutes later, he was picked up by a patrol sent to investigate the crash site. Numerous photos were taken of the aircraft, and of the pilot. He was taken to the local police station and then taken to be interrogated.

“Captain Scarlet, this is Nevsky, Splash One. Request air picture.”