I had switched to the internal frequency to hear Dimitri yell “Rifle!”. He must be using one of his missiles against one of the targets. I am sure Major Grachev will say something afterwards. It is of no concern right now as I went lower, and started to head to my first target area. Momentarily I thought what Sacha might say about this kill. It was too easy, this aircraft I shot at. I have faced more worthy opponents in a simulator! I flew on, with no other contact other than the steady beeping from the E-3A. I went left a bit, to extend my distance. I figured that since I was carrying Kh-31ps, the Vulcan would be within my minimum range. I passed the town of Kardonikskaja on the east side of it, and viewed a ground battle go on. I wished our soldiers good luck, as I hit the IP.

I therefore was just extending the distance, in order for me to engage this target more efficiently. I flew over the mountain, scoured the area with my eyes for any mujahid Igla gunners, but found none. That is good because I was vulnerable at this point in time. I turned towards the first target area, and launched my Kh-31p. 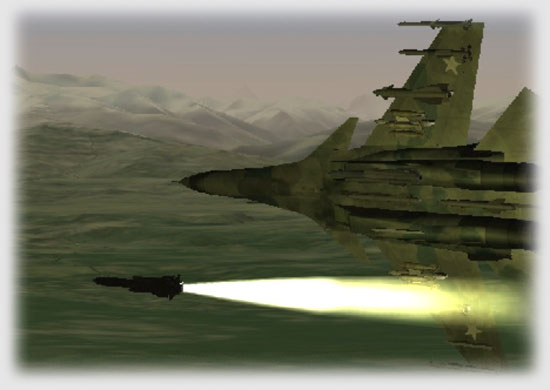 I immediately selected the Kh-25ML, and began to set myself up for a shot, then I turned to the tactical frequency. Rules made sure I conducted all sorts of work on this frequency. It is a wonder they allow us our own frequency. Surely they probably monitor it as well? I must congratulate these Spetznaz “Hawk” soldiers however, they have been efficient in getting in the area. Surely the mujahids do not suspect?

“Designating. If you come to your left, then right you can engage the target better, we have you visual.”

“Roger.” I did as instructed. I hoped for a millisecond it was not some mujahids baiting me into a trap. You must always take the chance. We must develop procedures to make sure. The target came closer into view, and the Kh-25ML was not properly tracking. I reset the tracker and it was on target. I got the “NP” cue, and fired.

“RIfle!” I too blurted out. Perhaps it is not so bad to say.

I followed the missile in… and it hit the wrong target! I cursed but saw tanks lined up by it. Perhaps I would still stall the advance. Instead of turning around, which in reflection I should have done, I continued on and hunted for the TOC. Comrades, while fuel of the enemy maneuver forces is a primary target, the command and control is also vital. I went for that.