“Roger, designating.” Once the blood settled in my head, I thumbed the seeker control, and locked on. Perfect! I fired and followed it in. 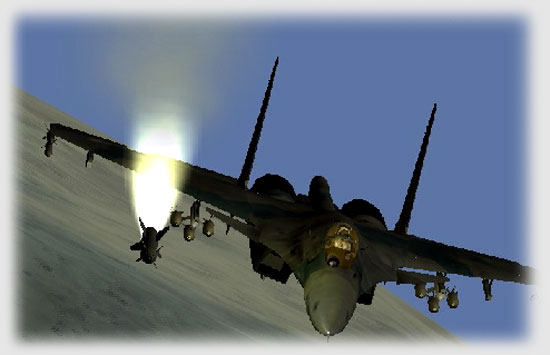 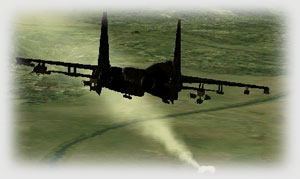 The four light vehicles exploded as the 500 kilogram warhead exploded. I sped past and realized I had missed another fuel point. I still had one Kh-25ML left for Target Alpha, and could use the RBK-250s for Target Bravo.

Only thing was that I was too low to nose down, or I would crash! I did not want that as if I had to eject, I might as well use my Makarov to save me. I selected the computer override, and patiently flew to Target Bravo, waiting to line up the pipper on the marker.

Once I got in range, I got too antsy on the trigger, and all of a sudden I had no munitions! the Kh-25ML I was going to use for Target Alpha left with the bombs! 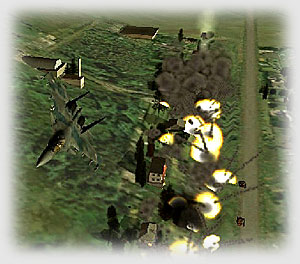 I felt pretty embarrassed, and considered landing at Maykop so I could fly my embarrassment out. But I continued on and decided I still had my cannon.

I would later on get a “partial” on Target Alpha. I damaged it with my GSh-301, but 30mm shells can only do only so much against a hard structure building. I did make it unusable, which is better than nothing. I made only one pass, as I did not have the fuel to make it to Sochi-Adler if I had to use afterburner and it was necessary for hard turns.

After nearly plowing myself into the ground, I did an escape maneuver and left for the Russian border. Once I achieved that, I contemplated intercepting the IL-78M tasked out, but after a few minutes of thought, I felt I could make it back to Sochi-Adler with the autopilot set to the return mode. I did not see or hear of any more aerial contacts. It seems like the mujahid sends up fighters only when we do, or if we don’t, they do combat air patrols. I think Frontal Aviation is playing a game, and the IRLF is slowly losing to it. I do not see any F-4s. Perhaps they will hit us with most of what they have after our two attacks. While flying back, I called Dimitri.

“Da, I got all targets attacked, plus the HAWK battery, tell those… how do you say? “Canucks” they can fly their pretty airplanes now. I would figure the Georgians would have more between the legs do you think? Perhaps it is because their country isn’t there anymore I guess. How did you do Comrade?”

“Same here, I have one partial though, Target Alpha I missed, but I did get another fuel building instead. I used the cannon to engage it, but I may have only damaged it, I will explain more when I get back. But I got all the other assigned targets.”