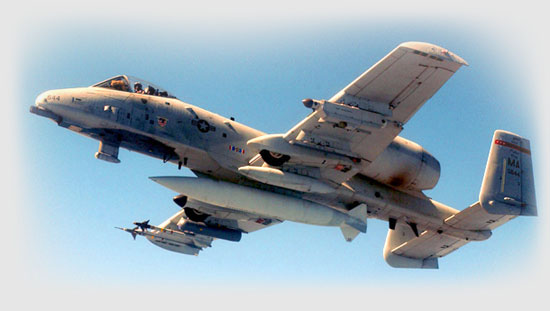 An A-10 of the 104th FW (Barnes Field, MA). The unit deployed with the 103rd FW
of the Connecticut Air National Guard during Operation Iraqi Freedom.
The 104th A-10s also carry the LITENING targeting pod.

Few modern military aircraft have broken the conventional wisdom of their roles like the A-10 Thunderbolt II (“Warthog”). Designed out of the close air support lessons of the Vietnam jungles, and conceived primarily as a low-level daytime anti-armor weapon for the European theater, the Hog has surprised critics for more than three decades by performing missions in environments wholly unlike both. In 1991’s Operation Desert Storm, A-10s operated at high altitudes, far behind enemy lines, and at night, previously unexpected environments for Hog drivers. Over Kosovo in 1999, it proved adept at the role of AFAC (Airborne Forward Air Control). In Afghanistan, its ability to operate from austere forward bases allows it to operate on the front lines of the war on terror to this day. In 2003, it returned to Iraq for missions both old and new. The ‘old’ were the A-10 staples, ground attack and supporting ground forces in contact with the enemy. The ‘new’ missions came with the introduction of an advanced targeting pod for the aircraft called LITENING II, developed by Northrop Grumman.

The pill-shaped pod, hung on one of the A-10’s eleven underwing hardpoints, brings new capabilities to the jet, including Forward Looking Infra-Red, image-amplified TV, laser target designation, and more. Considering the aircraft was originally designed with no targeting system other than the pilot’s eyeball, this is a monumental leap of capability for the A-10, turning it into a capable all-weather aircraft capable of using precision-guided bombs.

One of the Hog communities taking the lead in the use of the pod was the 103rd Fighter Wing, an Air National Guard unit operating out of Bradley International Airport in Windsor Locks, CT. The “Flying Yankees” deployed to an undisclosed location in the Middle East in early 2003, just a few months after being selected as one of two ANG units to receive the pod. Joining the Flying Yankees were the other selected unit, the 104th FW of the Massachusetts Air National Guard (located just a few miles away in Westfield, MA). Together, the two units deployed 18 Warthogs for a secretive role in the far western desert of Iraq. Together, the A-10 units flew 3,100 combat hours during 900 sorties, without damage from enemy fire.

Much of what they did there remains an untold story, overshadowed by the dramatic military drive from Kuwait up the Tigris and Euphrates River Valleys into Baghdad. Much of it won’t be recorded in public records for some time, as few reporters were embedded with the units participating in the western war. Nonetheless, what happened there remains a key part of Operation Iraqi Freedom.

I recently had a chance to talk to one of the 103rd pilots who deployed to Iraq to ask his opinions about the pod, how A-10s were used in Operation Iraqi Freedom, and his experiences in combat over the western desert.

Hogs In a “Hot” Peace: The A-10 Since Desert Storm, Part One

Hogs In a “Hot” Peace: The A-10 Since Desert Storm, Part Two