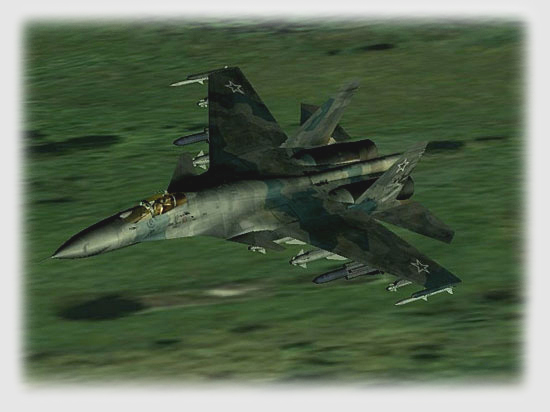 I am the hunter. I am Starshigy Lietenant Alexsei Karmarov, or “Mayday” by nickname. I earned that “glorious” title when I first started flying, when in the simulators, I would always call Mayday when I was perfectly suited to engage aerial opposition to me. That was when I was a cadet a few years ago. However, now I am no longer scared of the aerial threat to me. However, that is not what I do. I am what the Americans call an ‘attack puke’. I have not figured out, though sometimes I have felt nauseous when flying among the Cacauscus. Perhaps that is why that is so, because of the violent maneuvers a strike pilot must do to ensure he is alive. Whatever the case, here is what happened yesterday near Georgia.

Two days ago, information has been acquired about a Islamic Resistance Liberation Front defense minister is scheduled to be in the area. Where they did not know, but because the KGB is dead, does not mean that the old network it created is. Enter me. I was selected to perform a surgical strike using my Su-27KM2. It is an “updated” version of the Su-27K fighter that still flies on the Kuznetsov. However, unlike my brothers in the 279th KIAP, I do not fly off carriers. I have never been qualified to land on a carrier, nor wish to. If that happens, there is the autopilot, it can land for me in that manner. However, when the KM2 was redone, the capability of optically guided weapons was removed, in order for more improved avionics. I have flown the Su-33M, and enjoyed using the Kh-29TE weapon system. This aircraft however, has been modified to accept even American weaponry and fire them, though at degraded capabilities. Such is the world today. At one time my Father, Pavel Karmarov, flew Su-27s with the Moscow PVO, then the VVS when it was merged. He is General in Moscow still, but you would not realize I have such a powerful father. I was determined from birth to not let my father determine what I did in the Voyenno Vozdushnye Sily, or Russian Air Force.

My skill determines my fate, and when I was assigned to the 279th KIAP, I was immediately entranced with the Su-27K.

It was what I wanted in an aircraft. It was maneuverable, and in simulation F-16s are no problem. You must explore an aircraft before you dislike, or like it. Some complained about the heaviness of such aircraft. Yet they wondered how I was able to fly it like it was like a Fulcrum. Yes, there are considerations with such an aircraft. It is not light, nor extremely maneuverable like the S-37, but it does it’s job, and it has attitude, even at rest. Attitude that it can do what it’s expected of it, and deliver.

After being removed from the KIAP due to lack of carrier qualification, I did a short tour with the 115th Guards Regiment in Moscow. The MiG was never a plane I admired much. It was small, very little offensive capability. And the worst, short range. If you are planning to engage the enemy, you must have the stamina to do that. This aircraft was not that type. The other pilots studied aerial combat, I studied air to ground combat. Yes I was proficient in my ability to fly and fight the MiG in the air. But while the squadron wanted and tried to implement air to ground training, I was the only one enquiring about such training, and even went to Lipetsk on leave, to fly the Su-27SK in order to develop my skills as an ‘attack puke’ My Father yes, had some help (a lot I must say) in this project. He allowed me simulator time in order to “fly” tactics, and even fly some mock training missions whenever they would allow me. My old Squadron did not like my ‘high’ status, mocking me about eating mud. They were fools. If you do not take the time to explore the aspect of your fighter, you will be short handed. I even wished the MiG-29 would be allowed to use the various guided and unguided weaponry that the Russian state arsenal employed. I went for a year in my training. Then one day at a bar, a Russian VVS Colonel approached me. His name was Ivan Puskin. We chatted over vodka, and I let slip my love of the Su-27K. He cocked his head, and said:

“I know of a unit that is developing a next generation version of the venerable aircraft, perhaps you can ask your father if he can recommend you.”

Drunk or not comrades, you instantly sober up, for a second, with the realization that this stranger knew about you. Paranoia is still a way of life in this “free” Russia that we live in. So I just nodded dumbly, and went home.