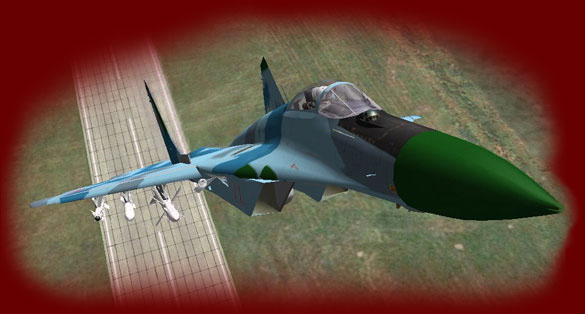 The Last One Standing

by Cat   Have you noticed, my friends, that it is only when you are in the midst of a very good kip that trouble comes looking for you? I am something of an insomniac, I fear, and sleep is something any soldier prizes highly. Imagine the irritation when the light shone in my face and the orderly whispered that I must come at once. The only thing I could think to mutter at first was that I no longer had the duty, it was Dmitri from the 503rd tonight. But the rebuke I had ready died at once when I brushed the fuzz from my mind and realized that it was the Commander’s summons that called me out of my bed! It was shortly after midnight, and the moon lit Sochi-Adler airfield outside my windows. I hurriedly dressed, and grabbed the bag with my white helmet and maps. Something was in the wind. Outside, the GAZ jeep waited, nonchalantly idling, dully reflecting the moonlight. Even so late at night Sochi is bustling. Toward the ramp, the arms trucks were rolling and soldiers hurrying to and fro. I ungracefully clambered in over the jeep’s side and motioned to the orderly to proceed, stifling a yawn. The strange thing was meeting Vasily at the door to the operations center. He and two of our comrades were coming out, on their way to another jeep parked nearby. He waved to me and sprinted over. “Have you heard, Sacha? The cursed mujahids are rebuilding their air force!” This, we expected. “And so we fight? But little falcon, why do you fly without your wingman tonight?” “I do not know.” Vasily was nonplused. “The Commander is sending us in groups of two and three; we patrol deep into the Black Sea. Strangely, our route does not take us south to Suhumi base, though. I do not know why. And you were not mentioned in our brief.” I rolled my eyes and groaned. “Not grounded again. It must have been the RBK cluster series I dropped on the convoy last week, Vasily. Their latest propaganda on the Internet named me a war criminal for that, did you see?” Vasily nodded. “Yes. But I do not believe that is what the Commander is thinking. He was not angry; he seemed worried, and impatient. And your peacock and his toady Dmitri were just in with the American Colonel Martin, and that Major Grachev of theirs a few hours ago. You should hurry. He is waiting especially for you.” I turned to go as Vasily grinned and cracked, “He probably wants you to be there to wipe Karmarov’s nose for him! He seems to need a nursemaid, eh?” I looked back over my shoulder and winked. “I can think of better things than that, little falcon. Now go and drill great holes in the sky.” As he turned to go I stopped, with concern; I am unused to flying without my trusted wingman. “Take care, Vasily. Do not let these rookies get you shot.” He grew serious. “And you, Shoura. I fear the Commander has a difficult task in store for you.” Inside, I found our leader pacing behind his desk, pausing only to light a new Turkish cigarette as the old one burned down in his hand, chain-smoking. He scowled out the window into the moonlit night. I stood before his desk, quietly at parade rest, for what seemed like an eternity before he noticed me. Immediately his hard, craggy features softened as he fastened his cool, grey eyes onto me. “Ah. Alexandra Dimitrievna, I have been waiting. We have important business to discuss. Be seated.” He indicated the plush armchair positioned in front of his large wooden desk.

On Time On Target

by Guest Writer Eric “Flanker56” Johnson   It was another long, boring week comrades. The thing with a special strike unit, you only do a few missions within a given week. The ratio has dropped since the constant hammering by our coalition forces against the Mutquedah forces. We have studied possible targets, and worked up strike plans, only to have the Major deny them due to lack of a requirement to attack, such as against the mujahid forces attacking Gudauta. So we instead maintain our aircraft, which do require much attention. This was broken up by Dimitri being sent to strike a supply convoy during his shift. He said that was one of the best missions he has done, but you must realize, we don’t do many either. Since we must maintain vigilance, me and Dimitri rotate 12 hours on duty, with 12 hours off from this duty. Such “duty” is that each of us sit around, talk, or work on our aircraft. Sleep is really no problem since there is not much to do. The “major” thing we had to accomplish was subdue the missiles we received. The majority of course were Kh-31p anti-radiation missiles, as well as Kh-29L laser guided missiles. Some air-to-air missiles were included, mainly new R-77 missiles, as well as a handful of AIM-120 missiles from the Americans. Some “technicians” (I label as such since we all suspect they are from CIA) inspected what we did, and were satisfied. They were already aware that we can use their fuel, since back in the Cold War days all Russian aircraft had NATO sized adapters so we could use their fuel once we captured their airfields. Who would have thought that we would be using this in that capacity, only on friendly terms? I have played “volleyball” with these Americans, some of the A-10 pilots and a few F-15 pilots. They constantly boast of how their aircraft is better. But neither is. The A-10 while yes, is in some ways superior to our Su-25, it is slow. The F-15 is highly maneuverable, I was allowed to fly one of their “F-15D” fighters. It was a trainer aircraft much like the Su-27UB airplane. I must admit, the F-15 would be good if it could fire air-to-ground missiles, then I may consider not flying the Su-33M2 I currently fly. But that’s it’s major drawback. It is capable of the turns necessary to perform strikes, but not the capability to execute that. Such a waste. Early yesterday, I was approached by Major Grachev while in my hangar, painting the last of the missiles we needed. “Comrade Lietenant, how is it?” He leaned on the wall, a trickle of sweat coming from his forehead, he may have walked from the Ops building, but I saw the UAZ parked a hundred meters away. He must exercise more. “It is fine Comrade Major, I am almost complete with subduing the last of the Kh-29Ls.” I remarked, as I just completed one. Five more to go, but I have enough available for a “flex” mission, at least requiring six. “Good, we have a mission in the works, report at the Ops building at 1800.” Well, least I didn’t have to worry about losing a note. Which also meant that when Dimitri came on, I would be “off”, but war demands that you accept this, and so I have. Besides comrades, the prospect of a mission makes us not complain anyways. I looked at my watch, only 1314 hours. I could put off the rest of the missiles for now, and catch a nap. You never know when you may need it, and it’s hot enough to make you drowsy. Major Grachev nodded, and he walked to his vehicle, to which he promptly left. Then again, the humidity was always not too good over here anyways, especially near the ocean. Which made me think of other things as I set the brush in the paint thinner, and closed the lid on the paint. The paint itself was nothing special, just a grey to make them less visible on my aircraft. The R-27s did not require much, since putting paint on the missile heads would degrade them to uselessness. Which brought me back to the current situation. The IRLF Air Force has been taking serious losses compared to our light losses (light being relative, the VVS was always strong in numbers). Also what has helped the situation was the strike on Sukhumi two days ago with cruise missiles that targeted a good portion of their aircraft, and personnel. The casualty rate was such to technically shut the base down, as well as extensive damage to the runway to render it unusable. Then an airborne Regiment was deployed to secure the airfield. The constant mortar attacks at Gudauta only make it useful for a true diversion airfield. It’s only the stubbornness of the Georgians, and perhaps the Canadians that they fly missions from there. It will only be a matter of time we can get rid of the IRLF irregulars and enjoy the fruits of peacetime.

The Last One Standing Page 2

The Last One Standing Page 3

The Last One Standing Page 4

The Last One Standing Page 8