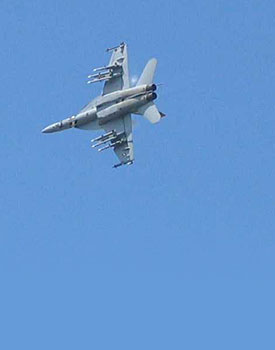 First off was the FA-18F Super Hornet. The F-14 Tomcat’s eventual replacement gave a superb display or aerobatics with its sheer volume and power displaying just what a capable multi-role aircraft the F-18 family has become. Only one thing concerned me — with the prevalence of stand-off weapons for use against naval targets, surely the lesser range of the FA-18s current missile armament and its lower top speed would give the carrier fleet less time to respond to an inbound threat?

Next up was a few overflies by the B-52H. This aircraft was from the 23rd Bomber Squadron of the 5th Bomb Wing at Minot (coded “MT”) in North Dakota. After the B-52 had missed Farnborough twice earlier that week (flying over Blackbushe Airfield 5 miles away) it was good to see the aircraft make a successful display. Unlike the aircraft earlier in the week, this aircraft had flown from RAF Fairford rather than from the US.

An RAF Chinook gave a display of its abilities — still managing to impress even though they are a common site in the area due to the concentration of army barracks. The army’s latest toy, the WAH-64D Apache was next up giving a display of agility without demonstrating its usual abilities at battlefield survival which I found disappointing. 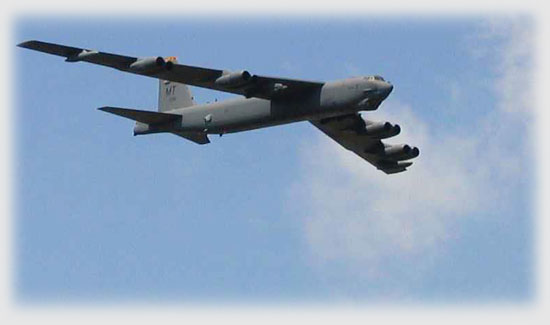 The USAF continued showing its offensive air power (always a clear message at an arms fair!) by sending over a B-1B next. A quiet run over with wings swept forward was followed by a “proper” run with wings back and afterburner on — magic!

Next up, an F-16C showed off its maneuverability (why can I never quite manage the same tricks in Falcon 4 that close to the ground?!). Smoke trails from its wingtips tracing its twisting across the sky. 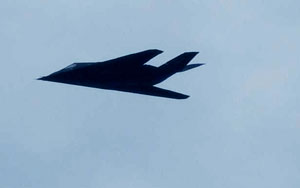 It in turn was followed by an F-117A Nighthawk which again just managed a couple of flybys before handing over to the vastly impressive Saab Gripen.

In a week which saw the Swedish Air Force cut its order of Gripens, the company was clearly fishing for export orders in a display which showed the new aircraft’s abilities to its fullest. Competing against the Eurofighter Typhoon and Mirage Rafael, the Saab won over many fans.

The fast jets were replaced for the next few minutes by the Raytheon 190 training aircraft and the Embraer 190 commuter airliner before the Airbus A319 and A340-600 gave a display of how agile airliners can be when they don’t have passengers on board!