The Royal Navy’s Lynx acrobatic team, The Black Cats were next up followed by the RAF’s first Eurofighter which, despite a restricted display, gave a good account of itself to the partisan crowd. The Italian Air Force then displayed its wares with a C-27J transport and MB339C trainer followed by a Tornado showing why this now venerable aircraft is still in frontline service after twenty years.

As the frontline jets began to draw to a close the latest C-130J Hercules showed why the type is such a major payer around the world after half a century in service.

The P-51D Mustang was next. This aircraft was an original warbird which served with the 351st during the war.

The Spitfire which followed it was a clipped wing MkV that showed off its D-Day stripes with pride. Also, there was a Spitfire PRXIX flown (photo below). 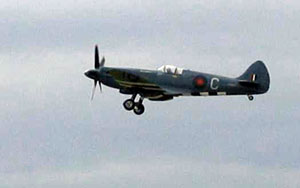 A overfly by a Tristar and VC10 of the RAF’s refueling wing was followed by a Cathy Pacific 747-400 taking off. At this year’s Festival of Speed at Goodwood, a South African Airways 747 gave a vivid display of the aircraft’s capabilities.

Unfortunately SAA gave their display the day before and Cathay Pacific’s flight crew were somewhat more sedate, flying over twice before rejoining the landing traffic for Heathrow nearby.

To round off the show Rolls Royce celebrated its centenary by gathering a number of aircraft which had used its engines.

First up was a Harrier GR7 from the RAF which gave the usual vivid performance of its V/STOL abilities before a Hawk T Mk1 showed what it could do when not in the hands of the Red Arrows.

A Gulstream G.IV illustrated that Rolls Royce engines were not just for military aircraft before a beautiful Spitfire PRXIX of the Battle of Britain Memorial Flight showed off its classic curves.

Following on from the Spit was a Hunter, Gnat and Jet Provost before the Spitfire returned and then the Red Arrows arrived to give their usual breathtaking display of precision and poise to draw the show to a close.

As I passed the Jaguar, Gnat, Lightning, MiG-21, and two Hunters outside the Farnborough Air Sciences Museum heading back to the car I could reflect on a day that was worthy of the wait. 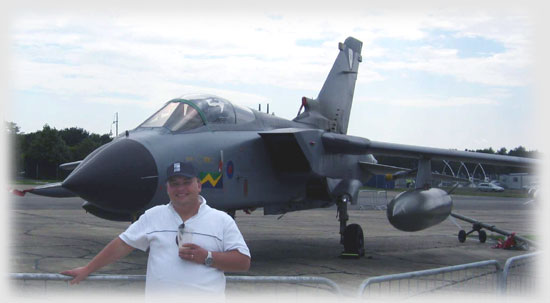