The Commander darkened the lights and showed us our target. A feeling of dread came over me. Not because I would be fighting again… but because of the reason that Vasily and I would fly. The slide on the screen was of the nuclear plant at Samelalio. This is a small, scientific village near Tkvarcheli. When Vasily and I hit the train station there, we were strictly warned against attacking even targets of opportunity there for risk of nuclear contamination. Now, the rules would change.

As the Commander outlined our task, the enormity of Muqtadeh’s latest outrage took shape. He has control of the VVER power reactor at Samelalio. He plans to use the reactor to reprocess the spent fuel into that required to fuel an atomic device! Our scientists, and the Americans, do not believe this possible. But our government is sufficiently concerned that we must disable the reactor. The best way to do this is to disable the large cooling towers. Samelalio has three. Without these, the reactor cannot be operated safely. In addition, the tanks housing the spent fuel rods will be hit as a secondary target. They are located around the complex. They look like large diesel or aviation gasoline tanks.

At last, the Georgian Su-25 squadron at Gudauta is ready to get into the fight. Three of them will be tasked with destroying the tanks. Vasily and I, the cooling towers. The British will send two Tornadoes to cover us. Though we do not need to fear enemy aircraft, there is a much more deadly concern. The Iranians have supplied the Sheikh with the most deadly surface-to-air missile system in the world…the S-300PS. This is like your Western “Patriot” system. It is the very finger of death. Now, Muqtadeh has it. Four launchers and the radars. The Tornadoes will be tasked with it. The Georgians and our flight will also carry antiradar missiles in case the Tornadoes fail in their task. At all costs, the S-300 must be broken.

I reflect on this, as Kolya the meteorologist pours tall glasses of tea and lectures us on the weather for our mission. He jokes that it is most temperate out, I can fly in a bikini if I choose… sunbathing is not on my mind, however. Vasily and I carefully study the maps of southern Georgia. We can make our approach through the mountains. We will be shielded until the last moment, but we will have to climb high to crest the last mountain range into target. We will carry a mixed load. I, one Kh-25MP, one Kh-23L, two PB-250. Vasily will carry two Kh-29L and two FAB-500 bombs. We do not trust the enemy’s lack of aircraft… we will also carry R-73 missiles.

At the appointed time, we wheel the MiGs onto the end of the runway. I listen to the British pilots on the radio, as I test control surfaces before slotting the throttles into full military power for the takeoff and climb out. Vasily is off faster than I, climbing high into the cloudless blue sky. And he calls me the impetuous one! 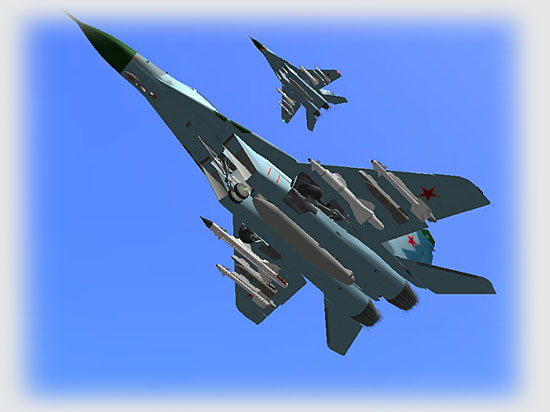 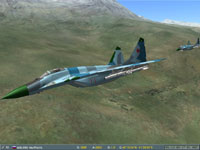 We dip into the ravines south of Sochi for nap-of-earth flying into the Sheikh’s territory.

Vasily calls to me a mud spike in the direction of Samelelio.

“Nyet. My jammer is operational. But with the Beryoza system down, I cannot lock the Arrow, Vasily. If the cursed IRLF has Shilkas again, or the British do not succeed, it will be difficult.”

It is up to our comrades.