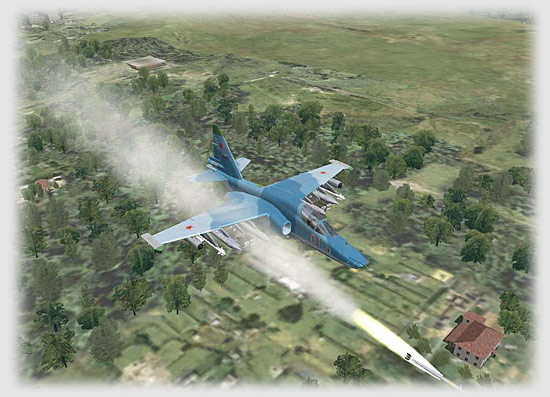 For me, the most important change is one that a lot of people won’t pay much attention to. We at last have access to the most realistically modeled air radar seen in a sim since the Falcon series. What Eagle did for the AN/APG-63 in the F-15C, they have at last done for the Su-27’s N-001 and the MiG-29’s first-generation N-019 radar…only more so. More than new radar modes have been added. The team has tweaked radar performance in all the aircraft. Radar jamming gate has been overhauled. ECM burn-through ranges are now modeled more precisely. Doppler effects are better modeled. And there’s more.

FC actually looks at the geometry, how the target is presenting in relation to the emitting platform. This is most prevalent in the Russian aircraft, because the Russian radar have to be set for front-aspect or rear-aspect targets to perform most efficiently. Part 2 of the Lock On (v1.1): Flaming Cliffs Preview will cover the new radar modes in-depth.

If you are a Lock On flier or a determined Flankerhead like me, you have to have this update when it becomes available. It is worth every penny of the price of admission, gang, because it adds a lot of functionality and new features, along with the new aircraft. Here is proof positive that Flanker Lives! Igor Tishin, Andrey Chizh, Valery Blazhnov, Oleg Tishenko, and the rest of the great Eagle Dynamics team are not about to go gentle into that dark night, and simmers everywhere should be ecstatic. I am.

Postscript: I want to thank Matt Wagner, who is no longer on the Eagle team but still a beta tester for Lock On: Flaming Cliffs, for his assistance in getting my hands on a beta of this update. Gracias, Matt. Don’t stay out of the game long — combat simming needs you!