The AI also tends to be suspect at times. The AI ranges from being out-and-out brilliant to out-and-out stupid at other times. This really has been an ongoing problem with the IL-2 engine and the difficulties with the AI are really shown in this latest version of the game. The AI, especially the friendly AI tends to do some really bone headed maneuvering in the game.

What exposes this is the philosophical differences between the two major combatants in the Pacific Theatre. The Japanese tended to build light, quick, extremely maneuverable aircraft like the A6M series and the KI 43 series. The U.S. decided to go with more heavily armed, armored and faster aircraft like the P-38, F6F and F4U. In low speed turning dogfights the Japanese pilots would tend to have an advantage over the higher horsepower — but more sluggish — U.S. mounts.

This is where the problem arises. The AI in the game tries to dogfight with every fighter in the game. This wasn’t so bad when it was a Bf 109F against and Yak1 but when you take an F4U-1 against an A6Ma5 you run into a serious mismatch. In the real world, the U.S. pilots figured out right away not to turnfight with the nimble Zekes but in Pacific Fighters the U.S. pilots never seemed to learn that. 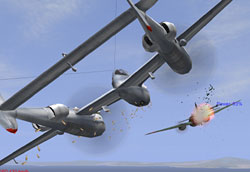 Even ace level pilots try to get into turn fights which often means a lot of shot down buddies. It really is a reality crusher for me when I take a flight of eight P-38s against eight Zekes and I come back with myself and maybe another guy while only one or two A6Ms go down.

Some AI improvements have been addressed. The ship AI is now configurable to allow for a varying amounts and accuracy of ack when you attack. In the past, attacking shipping was virtual suicide, but now you can configure the game to keep yourself alive during your dive bombing run. Likewise, ground and enemy aircraft gunners are less laser like and you actually have a better chance of attacking and defeating the enemy. Saddling up on a bomber’s six will get you shot down quickly but slashing attacks actually work now.

The game comes with a variety of single missions based upon the nationality and the type of fighter or bomber you accept. While the total number of missions that you can play with Pacific Fighters is probably adequate (over 30 single mission types with PF alone) unfortunately there is a feel that single missions are somewhat tacked on. Most of the missions are based upon a nationality and a fighter / bomber type and there are generally four or five missions that you can fly with each of these types. Like Forgotten Battles, players have the opportunity to add custom skins to their aircraft for use in the game. 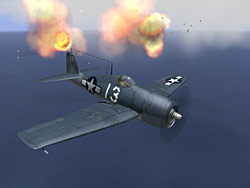 In reality this has been a problem with not just Pacific Fighters, but with most recent flight sims in general. It has been a trend lately to minimize the shipped number of single missions in a game, relying instead on the public to create single missions that fill that void. In the case of IL-2: Forgotten Battles and Pacific Fighters this really is a mistake. There was a major chance to create some of the major fights of the Second World War with PF. I would love to have had a single mission where I flew a Hellcat during the Marianas Turkey Shoot or as an SBD attacking the Japanese Carriers at Midway.

While these missions are being created by individuals independently and either are now or will be soon available for download, the essential problem still remains. Since probably fifty percent of the buyers of the game rarely download even patches for a game it is unlikely that many will bother to look for add-on missions. In addition, many newbies getting into the game probably will be turned off by the relative lack of missions for the game. While the veterans of the series may not have a problem looking for or creating missions, I fear that newbies may not have the patience that the rest of us have.

Ok, enough of that. One of the best features of the entire IL-2 series has been its quick mission builder and the mission builder of Pacific Fighters hasn’t messed with the winning formula. Quick missions can be made with all the flyable in Pacific Fighters and if you have the IL-2:FB and Aces Expansion Pack on board you can take up well over 80 different fighters or bombers in the game. You can set up fighter vs. fighter combat, escort missions, bombing missions, with up to 16 different aircraft flying against each other. Pilot experience, ordinance and numbers of aircraft are all scalable in the game.

One new thing for Pacific Fighters is the ability to set up missions using PF aircraft in ship attack missions. You have the capability of defending your carrier or attacking enemy warships with your Val. A quick mission can be set up and be up and flying less than one minute with the quick mission builder. Like Forgotten Battles you have the ability to add custom skins to your flyable as well as to the AI aircraft in the game. I have found that this is the best way to get into a quick fight is to use the quick mission builder.