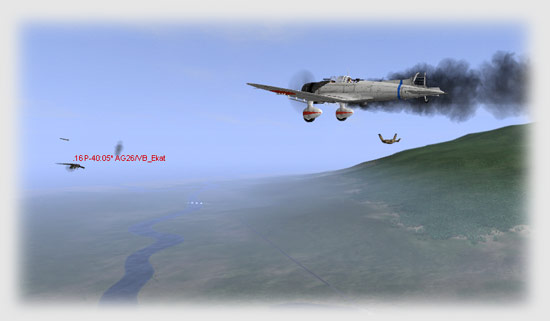 These days you can’t have a top notch sim without a decent multiplayer code. One of the highlights of the IL-2 series has been its multiplayer engine, a robust vehicle that has kept the game alive for years. While other, newer games have come and gone, the IL-2 engine has continued to thrive in places like Ubi.com and Hyperlobby. Pacific Fighters continues upon the solid multiplayer of its predecessors and even manages to improve a little upon the originals.

The original IL-2 boasted 32 person (non-ai) multiplayer capability, an impressive number back in 2001. Indeed, many modern games are lucky to get 16 people playing at the same time. Forgotten Battles upped the number of head-to-head fighters to 64 and coop (i.e. with some AI aircraft) players to 32. Pacific Fighters raised the bar again, this time claiming the ability to host up to 128 fliers at one time. This takes the multiplayer from the realm of a box sim with online capability to the potential of being the first box simulation that could seriously compete against the online only games like Warbirds and Aces High. 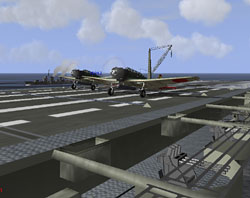 To be honest, at the time of this writing I have yet to actually see, much less fly in, a true 128 player match. While theoretically possible I have the feeling that the computing power needed for such a setup would be too much for the average gamer. There may be someone with a spare server lying around that could host a game like that but there aren’t too many of us around with that kind of hardware power and bandwidth to spare. Even games over 32 players tend to get warpy at times.

A lot of this depends on the connection of the players, that is for sure, but a lot of it is due to the limitations of current technology. Even if the software allows the capability to fly in 128 player arenas the power of the average PC with a standard cable or DSL connection probably still isn’t up to par with such lofty dreams. Dedicated games like Fighter Ace 3.5 still have the luxury of being able to host large numbers of fliers with little lag.

This may change with the upcoming server that Ubi is planning on putting out with its patch. The details of the server are a little sketchy but if it allows 128 people the opportunity to fly in a lag free environment then I predict that games like Warbirds may have a more threatened future. Lag free 128 player servers would allow people the opportunity to really create battles like the Coral Sea or Midway. I can foresee players signing up for special events recreating the Solomons campaign or the air combat around Guadalcanal. If you add the capability to play with Forgotten Battles and AEP then the special events could become quite interesting.

There are some problems with the multiplayer. Most of them are small, some are legacy problems with the original IL-2 series. I have found that the game can still be quite laggy with more than five or six fliers in a coop game. This is made worse if one or two people have dial-up connections with higher ping times. Always make sure the fastest connect is the one that hosts. I have logged into games where I am the faster player and at times I have had trouble with everyone warping on me. I personally won’t log into a game hosted by a dial-up person, under any circumstances.

One other problem is the incompatibility of stand alone Pacific Fighters to fly with games containing both PF and IL-2:FB+AEP. It can get somewhat confusing for people who own both series to figure out who is flying what in the game. Log into Hyperlobby and you may find that your AEP / PF game may not run with someone who is using just AEP or with someone who just has Pacific Fighters on their computer. Ubi.com just has a lobby for those with Pacific Fighters. There may be some folks who would like to fly P-47s against Ki 61s. Those guys are out of luck at Ubi.com. It is confusing and probably will be for a while. I am hoping that Jiri at Hyperlobby can come up with a separate lobby for IL-2:FB fliers, IL-2:FB / PF fliers and PF standalone pilots. It doesn’t have to be separate lobbies, just separate rooms in the IL-2:FB lobby for those that have different versions of the game.

So overall the multiplayer has improved slightly but there is no significant improvement over the prior versions of the game. It remains to be seen as to how the dedicated server UBI is putting together will work. Of course, the biggest improvement is the ability to wage a carrier war online against your buddies. For many of us, this is a significant improvement. I do think though that the only way to play this game is online. Online campaigns can and are being generated and the difficulties that I have found with the AI offline is mitigated by flying with real live humans. If your buddy tries turnfighting in his Corsair and gets his butt shot off then he has no one to blame but himself. 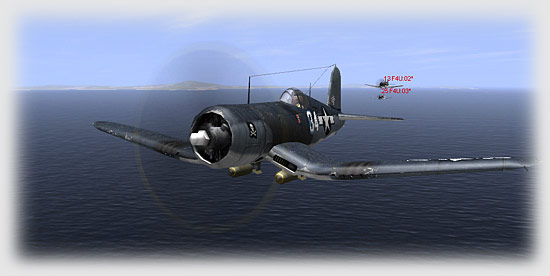