“Go high to take the leader. Chainsaw! One, shooter.”

I can hear the Hornets as Sugar and I set up on the incoming MiGs. They are starting their target runs!

The Hornets are launching AGM-65 Mavericks at the three Grad launchers!

I designate both targets. I will release both my AIM-120s on this pass and thereby force them defensive. Our ECM is preventing a target lock but knowing the MiGs have lock-on-jam capability, we must fire and deny them the shot with an R-27! 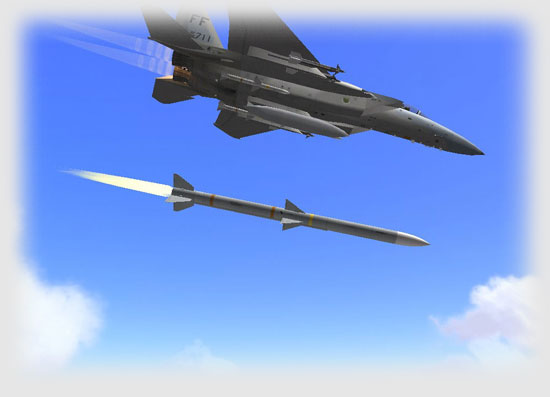 “Roger. Fox one.” Sugar has fired a Sparrow.

The lead Hornet’s Maverick is on target, as are the two fired by his wingman.

The Canadians are in the process of a bomb-damage assessment over the mujahid compound, a dangerous task, as it is shrouded in woods and an air battle is happening only a couple of miles south of them! I am well inside RTR now and my AIM-120 missiles are active as they come off the pylons. I switch to single-target track mode on the wingman and see him immediately change course.

“Both missed on the leader! Fox two, dammit, guns, guns from two!”

The lead MiG-29 is savagely maneuvering!

He forced both the inbound AMRAAM and the inbound Sparrow to overshoot him. Sugar fires a Sidewinder, but the MiG pops flares and rolls inverted, pulling across the missile and forcing it too to miss by mere feet.

In so doing, though, the MiG lead pilot has placed himself in Sugar’s gunsight. The Vulcan cannon in her right wing root buzzes angrily and a swarm of phosphorous tracers reach for the MiG, a Syrian from the same squadron as the MiG I stole last year, ripping through one of the horizontal stabilizers!

The second MiG is Iranian, as I found out later. It has defeated my Slammer with a violent maneuver, pitching down and then up at the last second and forcing the missile to miss low as it tried to match his angle. He pulls through and commits a fatal error, I can see the light of his afterburners.

I have a Sidewinder selected, screaming in my headphones for me to release it. Instead, I maintain STT lock and fire a Sparrow. So close and with the Iranian’s energy depleted, he has no hope of evasion.

“Two, fox two!” Sugar is still engaged with the Syrian, a dogged fighter.

As he explodes, I pull into the vertical, with full reheat selected. Coming over the top, I am in vertical scan dogfight mode and still inverted as the APG-63 locks the Syrian fighter in STT, two miles away and crossing me at an oblique angle. 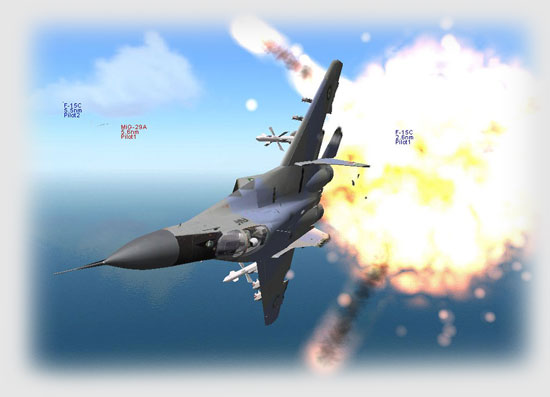 A LOMAC Mission Report: On Wings of Eagles Page 3

A LOMAC Mission Report: On Wings of Eagles Page 4

What Grrlz Are Made Of Page 2

What Grrlz Are Made Of Page 5