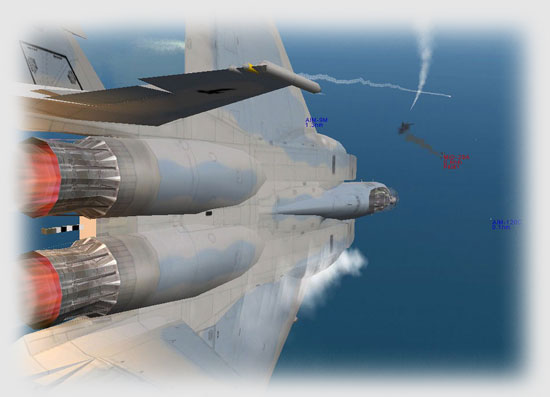 I do not want to risk a heat-seeking Sidewinder locking onto Sugar, who is also downrange, looping in for a head-on pass!

Again, yellow tracer envelops the enemy fighter, bringing fire and doom for the Syrian pilot. I see him eject as the MiG drops off my radar.

To be sure, I “freeze” the radar, ending all emissions so that the Sparrow will self-destruct.

It is the British controller, who I know from previous missions.

“Destiny Angel?!” This from one of the F-15 escorts, coming up on our squadron common channel. “NOT! More like Spice! As in ‘Sugar and Spice and everything nice!’ You baaaad girl, Sugar!”

The squadron exec was flying on the escort mission for Captain Scarlet today.

I can see the orbiting Hornets now, coming in to check target damage. Sugar’s eyes are sharper, however and she snaps a warning to the Canadians.

Two enemy missiles leap up from the ground at the Hornets, as they immediately maneuver hard to the left and up! I swallow and curse inwardly — this Eagle has no air-to-ground facility.

“We can strafe the cursed mujahid with cannon….”

“Veto!” Sugar was definite and continued, “It’d feel good to get our butts in a sling. Those guys can defend themselves just fine and I wanna be eating real food and not field rations in a hole someplace hiding from your pals down there tonight.”

She is right. The Eagle is an interceptor, not an attack fighter.

It is time to return home.

The Last One Standing Page 8

What Grrlz Are Made Of Page 2

What Grrlz Are Made Of Page 4