Over the numbers the throttle comes back and I roll in a bit of nose-up trim as the plane settles toward the ground. Ideally the throttle reaches full idle just as the airspeed winds down through 85 to 90 knots a few inches above the pavement. Touching down the nose-wheel gets lowered and moderate braking brings us to a stop in less than 1400′ feet. Using full reverse would further shorten that distance and normally using reverse is preferable to braking since brake replacements are one of the most frequent recurring costs with King Airs. (Of course replacing worn props can also be a factor, so choose your poison!) 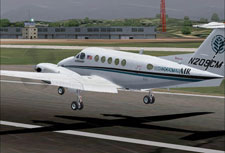 With our plane safely on the ground (although the flight isn’t over until the chocks are set and you are in the car driving home!) now is a good time to visit two points that seem to come up often enough to warrant attention in the Aeroworx B200.

The first involves the perception that the Aeroworx flight model isn’t “draggy” enough. With the condition levers in high-idle, the airplane does seem to be a bit reluctant to slow down. This can be remedied however, by simply operating with the condition levers in low-idle. This concession, in my opinion, is totally fine since the only time we operate the engines at high-idle is when it is extremely hot outside. The air-conditioning compressor is run off the right engine and occasionally in the summer we have to bump up the right engine N1 until the “AIR COND N1 LOW” annunciator extinguishes. Other than that, running the engines at low-idle is completely normal.

In low-idle the airplane performs spot on. A reduction in throttle to flight idle with the props forward results in significant drag and very accurate descent and approach & landing performance.

The second point has to do with throttle response. Several people have complained that the torque response is a bit “laggy” and not responsive enough. I’ve noticed the toque instrumentation (more the instrument than the actual feel of the aircraft) response to be a just a touch slow during rapid power reduction but I feel it is totally fine given the reality of flying the King Air. In my 7 years of flying the King Air, I’ve never once “jammed” power in nor “yanked” power back, for any reason, under any circumstance. Smooth power applications and reductions will be appreciated not only by your passengers, but by your accountant when engine changes come due. The power response in the Aeroworx B200 seems spot on when used appropriately (meaning normal operations) and only seems “off” (and only a bit off) during wildly unrealistic power changes that I’ve never done or observed in my time as a King Air pilot.

In talking with Henning he has been very forthcoming about the bugs and limitations that they are aware of in the Aeroworx B200 and he has made it abundantly clear that they strive for perfection. Explaining to me how incredibly difficult it is to model a turbo-prop engine within the constraints of the FS2004 architecture made me aware of just how much work and fine tuning went into the engine and flight models. For every small change or tweak there is a massive cascading effect that threatens to disrupt the balance of every other parameter. Working within the limitations of the simulation I feel that they have done an exceptional job of balancing the flight model and aircraft performance to mirror the real-life counterpart.

One last point I’d like to make that is that if you fly the Aeroworx as it was designed to fly, you have on your computer a simulation that, in my mind, rivals the best flight training simulators out there (and I’ve spent quite a few hours in the FlightSafety King Air 200 full motion simulator!).

My last demonstration is a reenactment of my greatest “oh crap” moment flying in the B200. A few years ago, departing Nashville (again Nashville!), I was in the right seat letting my copilot fly the “dead” leg return to CLT when we had what I refer to as “an un-commanded right engine shutdown”. The reenactment will be shown in daylight even though the incident occurred at night. 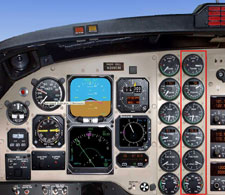 It was a bit after 10PM central time as we were climbing routinely through 14,000 feet on our way to FL210 for the return leg to CLT. Suddenly there was a large bang from the right engine and the airplane rolled slightly to the right while the right-seat flying copilot countered the yaw and roll as he lowered the nose. Flames started pouring out of the engine stacks, extending a good 10 feet past the exhaust stacks and licking up over the inboard section of the wing between the nacelle and the fuselage.

I got on the radio and declared an emergency to the Memphis center controller and we advised our intention to return to Nashville since it was directly behind us only 14 miles distant or so. Meanwhile the flames continued to pour from the stacks while we went through the engine shutdown procedure. The prop had feathered itself, so it was merely a formality to go through the motions of completing the shutdown (confirming that you are shutting down the CORRECT engine!) by putting the condition lever into fuel cutoff, feathering the prop, and closing the firewall shutoff valve. For 30 seconds that felt like a lifetime the engine burned, then finally went out (our aircraft was not equipped with fire bottles). 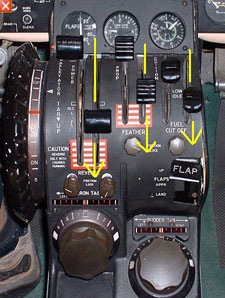 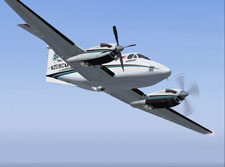 We completed our 180 degree left turn and the controller at Nashville must have turned the runway lights up to full intensity because there in front of us in the dark was the most beautiful row of approach and runway lights I’ve ever seen!

In fact, we had climbed so steeply to get up to altitude and catch the roaring tailwind that when we turned around we were looking over the nose at a pretty steep descent to get back down to Nashville. I’ll take too much altitude over not enough any day!

A look out the 3D cockpit; yeah, it’s stopped all right!