Q: How many people worked on the project and how long did the B200 take to develop?

A: In total, we were five people that contributed to the project, of which two (Mark Dirsuwei and myself) were involved from beginning to end. The other team members were Dave Harbold, Fabio Miguez and Matt Kaprocki.

It took us 18 months in total to develop. This was our first aircraft project for Flight Simulator and the learning curve was rather steep. Future releases will take far less time to develop.

Q: The B200 is Aeroworx’s first release, what made you choose to model the B200 as opposed to other aircraft?

A: Mike Hattingh, a pilot and avid flight-simmer, suggested the B200 as our first project. We were at Grand Central airport (FAGC) busy taking pictures of a Cessna 210 Centurion, when a B200 taxied by. That was that. The decision was made, and when I told Mark about it, he was more than keen although he (and I) regretted it later, as we had very little in the form of plans to work with for the 3D model, and basically had no idea what we were getting ourselves into.

Another reason is the fact that the B200 is and always has been my personal favorite when it comes to turbine engine aircraft. It is such an amazing aircraft (the real one that is), and now I can fly one whenever I feel like it LOL.

Q: How did you authenticate and test the behavior of the flight model, avionics and aircraft systems?

A: Jack Colwill, one of our beta testers, is the B200 check captain at North Cariboo Air in Calgary, Canada. Jack was relentless in his testing, and did not (well, almost) take no for an answer. He really made a huge contribution. We would not have come close to the current status of the product without his help.

Q: Regarding the integration with FS2004, were there many difficulties working within the framework of the simulation?

A: Although a great product overall, there are always difficulties with FS, no matter what you do. However, when you start thinking outside the box, things do get a bit more tricky, especially when you start implementing custom systems and avionics, as well as accurate flight dynamics. The flight model is really close in terms of numbers, but there are still some idiosyncrasies when you look at the way certain instruments react to for example throttle manipulation. We basically had to work within the constraints of the sim in order to make the aircraft behave accurately throughout all phases of the flight envelope. So yes, there were difficulties, and there always will be, especially when you (try to) work outside of the parameters.

Q: Will there be any updates to the current B200 package?

A: Yes, we are busy working on version 2.0, which will include a list of bug fixes, as well as some new features and enhancements. These will all be published on our web site not too long from now. There are also plans for a version 3.0, which will include your aircraft (N209CM) with the medical interior, and updated avionics to match.

Q: What future products/projects are in the pipeline for Aeroworx?

A: We are currently in the final stages of completing the T-6 Texan / Harvard Mk. III. You can have a look at the dedicated web site here. We are also working on a BE58 Baron. Work is progressing well on that, and we will be showing screenshots of the model in the near future.

I’d like to thank Henning for taking the time to answer all my questions and sharing with me not only specifics about the B200 project, but giving me a glimpse at all the things happening behind what actually shows up on the monitor. This B200 pilot thinks their product is a great addition to FS2004 and really sets a high standard for companies looking to model complex aircraft. If you want an extremely close approximation of what it is like to be a professional air-ambulance pilot, set your alarm clock for 2AM. When it goes off, go drive your frosty car 10 miles, return to your house, boot up FS2004 and randomly select two airports with unknown weather. Climb into the Aeroworx B200 and head off into the night sky to help someone in need! 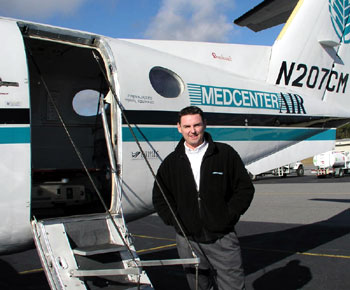