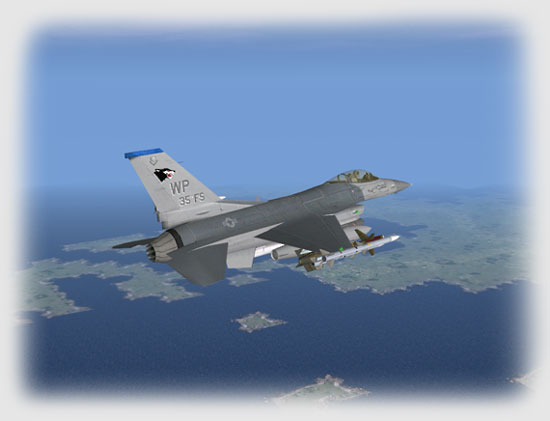 In this article we will consider the evolution of the Falcon series flight model and explore some of the implications of changes in the performance of the default F-16, in terms of the resulting influence on dissimilar air combat, and in particular, with the F-16 v MiG-29 engagement.

Firstly though, if you cast your mind back to the beginning of 1995, you may remember a utility called Falcon Test Pilot (FTP) and how it gave a new lease of life to Falcon3. At a time when we had all been flying Spectrum Holobyte’s Falcon 3.0 for four years already, suddenly it was possible for players to fly all of the aircraft in the game. Dissimilar air combat, against real opponents, was a refreshing change for anyone who had been flying F-16 v F-16 in online competition for years. However, the different characteristics of so many new aircraft presented a formidable challenge! That inspired me to prepare an analysis of the performance of the Falcon3 aircraft, both the Complex and High Fidelity flight models, and many of the other aircraft that could then be flown. In the September ’95 issue of “Enemy Lock On” magazine I published an eight page special feature that included this analysis in the form of about twenty Energy Maneuverability (EM) diagrams, with accompanying explanation. Now, nine years since then, and about twenty years since Falcon’s birth (If we count from F-16 Fighting Falcon released in 1984), it is still possible to fly all of the aircraft in the modern version, and thanks to a small group of highly skilled and enthusiastic volunteers, the flight model of each of them is still evolving, and getting better with each generation!

Back then, Falcon 3.0 had three different flight models, a simple flight model, a complex flight model and the high fidelity flight model. It was possible, only with the aid of FTP to edit the complex flight model, today in Falcon 4.0, something similar is possible because a lot of the aero and engine data is contained in look up tables that are very easy to interpret and edit. In this article I hope to provide you with an insight into the development of the Falcon 4.0 series flight model, and its evolution through some of the versions, with some discussion on the implications this has had to the resulting air combat.

But first, for those of you who may be unfamiliar with the method of comparison I’m going to be using, I’ll just say a few words about Energy Maneuverability diagrams. The Concept used in these diagrams was originally a British invention, and has been used to analyze the turning performance of fighters since the beginning of World War II. A more recent adaptation of the method was developed by Boyd and Christie who coined the phrase “Energy Maneuverability” to describe the duel purpose of such diagrams. A previous article describing the application of these diagrams can be seen here, and for those who need to brush up on what the lines and curves mean, there is a slightly more in-depth description in the article here, and although the latter article is more concerned with prop’ fighters, the EM theory is essentially the same.