The Last Days is an extensive late war campaign for the IL-2 Forgotten Battles flight simulator series. The pack can be added to Forgotten Battles and any combined installs as long as you have FB 1.21 or later installed.

TLD boasts quite a bit of content for it’s $19.99 USD price tag. The product contains:

A massive amount of single player missions that include:

In addition there are over 550 online playable missions to include:

Finally included are missions from the campaign which include:

I tested the download version of The Last Days which comes directly from Matrix Games. A 654MB file was available immediately after paying for it via credit card. The download went without any problems. Once unzipped, and the setup started, the user is asked for a serial number which is provided via email. There is an option to buy the game on a physical CD if that is what the individual desires but this is at an increased cost. The downloaded version of the game is $19.99 while the CD-ROM version ships at $29.95

Installing TLD is fairly straightforward; when setup is clicked it will ask to create a new folder, “Matrix Games / The Last Days”. Once the installer creates this directory the auto-installer will ask what your setup is. I installed the FB / AEP / PF selection. You have the option to install the game in either a IL-2: FB / AEP directory or with the addition of Pacific Fighters. TLD does not work with the stand alone Pacific Fighters game.

When I first tried the Lvov (Luftwaffe Fighter) campaign I ran into trouble. I received an error message stating there was no map in the mission folder. Fortunately The Last Days has a nice repair function built into the setup file. I merely went into the new directory called Matrix Games / The Last Days / setup and clicked on the executable for my configuration. Then the setup asked whether I wanted to remove or repair the install. I’m happy to say the repair function did in fact clear up the trouble. 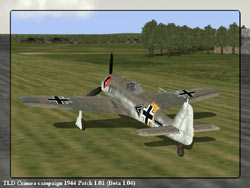 TLD adds new music themes as well as new screens. The music for the Luftwaffe and Russian campaigns is quite somber. I found this theme to be quite stirring as it gives the feeling of desperation. I don’t normally feel so strongly about a music that plays during the mission setup screens. However, this music really does add mood to the simulation. It gives the impression of a hopeless and desperate time.

The Music for the British campaigns is “Promontory” from the movie, “The Last of the Mohicans”. Snippets of Winston Churchill, including his “Their Finest Hour” speech are overdubbed on the track. The dubbing is done well and definitely is befitting of a UK campaign.

The new main screen for TLD has several photographs of aircraft, a map, and some goggles on a table. The individual campaigns have their own loading and briefing screens. Most of the featured countries have a letter from the pilot to his wife. A smattering of photographs and / or post cards can be found on the writing table. The Soviet briefing screen varies in that the table is covered with Stalinist propaganda post cards. One of these stands out. The card shows a German soldier standing on top of an apparently dead Russian woman. A Soviet soldier is strangling him with one hand. The Soviet’s other hand holds up his machine pistol up to bash the German with.

Most of the missions in the The Last Days campaign have lengthy briefings. There is a very good reason for that too. I’ll expand on that in the “Missions” section below.

The briefings in TLD are well thought out. There are some problems here though. First, there is some mild profanity and sexual comments. I don’t think it’s anything you wouldn’t hear in a sitcom after 8 pm. Just the same, it has to be mentioned.

Second, the briefings have numerous misspelled words and some words just don’t fit. Does it hurt the campaign system? No. The briefings describe your objectives quite well. Actually I personally feel the minor spelling and grammatical errors give the campaign a European feel. It’s kind of like having a German actor speaking the parts, bad English and all.