Gene Garrett retired from the United States Army in 1995 as a CW4 Master Aviator with over 4,000 flight hours in helicopters and 1,300 combat hours. His career included service in two wars, Vietnam and Desert Storm. His flight and maintenance experience includes the AH-1G Cobra, the UH-1D and UH-1H Huey, UH-60 Blackhawk, and the AH-64 Apache. His duties included line pilot, Maintenance Officer, Quality Control Officer / Test Flight Instructor Pilot, and Aviation Assignment officer. We are pleased to have had the chance to talk with him about his Army career, combat experiences, and especially flying the AH-64 Apache helicopter.

Q: Gene, welcome to SimHQ. Tell us a little about your background, and how you got into flying for the Army.

A: Well, I guess you could say flying is in my blood. My grandfather flew in WW I, and my father served 20 years as a pilot in the Air Force. I was an Air Force brat, born in Hawaii, and lived in Okinawa, Japan, the Philippines, Wake, and Guam. We came back to the States, lived in New York and Texas, then my father retired and we settled down near Atlanta Georgia. I attended the University of Georgia where I spent more time with the girls and partying than I did my studies and my grades suffered. As it turned out, I found my niche because of those low grades! I lost my college deferment and was drafted. I did well on my entrance scores and was offered Flight School, West Point Prep, and OCS. I chose Flight School and never looked back. 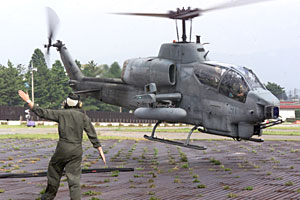 Q: Twenty five years of military service, very impressive. Talk about your Army career, where you’ve been, some of your duty assignments.

A: After Flight School completion and maintenance officer/test pilot courses, I was a line pilot in the Delta region of Vietnam, flying the AH-1G Cobra and UH-1D Huey. Following Vietnam, I was in Fort Campbell KY, in Germany flying AH-1G’s and AH-1S (Tow Missiles), then Davison Army Airfield in Virginia, on to Fort Hood, Texas, Fort Riley, Kansas, and then Saudi Arabia for Desert Storm.

Q: You have a lot of experience with the AH-64A Apache, which became operational in 1985. By 1997, the fleet passed the 1,000,000 flight hour milestone, and while many are still in service today, many more are being upgraded to the AH-64D Longbow. You were involved early on with the aircraft, what was it like to train to fly an Apache? 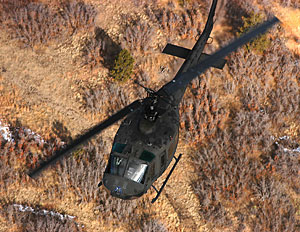 A: The training was great, but one of the hardest things I have ever had to do. The Apache is not an easy aircraft to fly. In fact, a lot of pilots didn’t finish the course, which is unusual considering many were Master Aviators with thousands of flight hours logged. . Everyone had to be trained to fly in both seats initially, and the test pilots had to maintain their proficiency in both seats. First, they train you to fly during the day in VFR conditions, then later on, under the hood and using the PNVS at night. That is really tough because all of your visual cues come from six feet in front and two feet down, where the system is located. Even simple maneuvers like making a pedal turn around the mast are very tricky until your mind wraps itself around the concept of your “eyes” being out where the PNVS is at.

Q: The Army utilizes advanced flight simulators for training purposes, talk a little about what they are like, and compared to what we might see in a typical helicopter simulator for the PC.

A: I used to say the military’s simulators were the “best video games in the world without a quarter slot”. And they were. They were exactly like flying the aircraft, the feedback was very good, much better than any PC sim. The graphics weren’t as good compared to today’s video games, but good enough to convince you that you were really flying. The simulator shook when hit, and vibrated when a component failure would occur, just like the real deal.