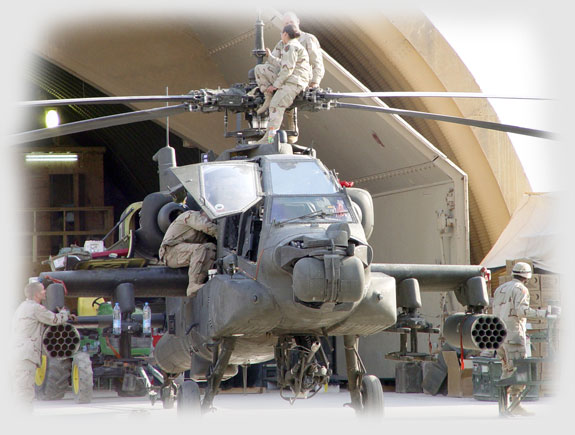 Q: You mentioned the difficulty of training to use the PNVS system, what is it like flying the aircraft at night? What would a pilot do in the event of a PNVS failure on a very dark night? Also how about flying the Apache low to the ground, NOE. At what point in a mission would the pilot be flying NOE? At the IP or elsewhere?

A: Each mission is planned with the terrain, weather, distance, enemy locations and weapons systems we expect to encounter in mind, and tailored to give us the maximum advantage and flexibility in determining the route and the type of flight. NOE is very intense and wears a pilot out much faster than typical straight and level flight, so we would save it for when it was necessary. Flying with the PNVS is difficult, as I mentioned, but experience with it makes all the difference. Flying PNVS and NOE is about as stressful as it gets. If we had a PNVS failure at night, it would depend on the circumstances, the ambient light and the distance to travel. If there was a full moon out, for example, I’d continue on the mission as the trail bird. If the base was close, I’d go back and get it fixed. I will tell you that flying the AH-64 on a dark night with no PNVS and near to the ground is not conducive to your continued good health.

Q: How would you compare the Apache with its Russian counterparts, the Mi-24 Hind, for example?

A: Technologically, the Apache is far superior. However, it is a maintenance nightmare. It takes many more man-hours to launch and keep an Apache flying than a Hind. They are less reliable. But, when it’s flying, there is not a helicopter in the world that can out fight it.

Q: Interesting. I understand that during Operation Desert Storm, the Apache has a readiness rate of over 85% though. Impressive for those conditions and given the reliability problems you mentioned. What accounts for that?

A: Parts and man-hours. Both were plentiful.

Q: What kind of battlefield threats did you encounter?

A: Vietnam, we had SA7 missiles, .51 caliber machine gun fire, and small arms. Saudi Arabia we had friendly fire, spiders, scorpions, and hungry Iraqis. Probably the best defense for the Apache is nighttime, it owns the night. Daytime, well, it’s big and it’s easily seen.

Q: Any particularly memorable experiences or missions you can us about?

A: Two come to mind. The first was in Vietnam when I was shot down. We were on an ash and trash mission, carrying supplies and personnel in a UH-1D. En route, we were told the base we were coming towards was in jeopardy of being overrun and that we would have to come in over a large rice paddy on the south side of town. We flew in at 3,000 feet and did an out-of-trim, very tight turn with the velocity vector at between 3,500 and 4,000 feet per minute. Basically, the helicopter’s aerodynamics are like that of a brick at that point.

We were getting .51 cal fire the entire time during the descent and got hit in the transmission just before landing. We were in an aircraft that probably shouldn’t have been flown anymore, but we had other missions and some higher-ups needed to leave. We took off, but got hit again and had to do a forced landing in a large patch of elephant grass. We set up a perimeter and about thirty minutes later got pulled out by another crew just as the VC were closing in on our position.

The second mission was in Saudi Arabia. One of my Technical Inspectors was married to a gal who was also in the division. She had to have four hours a month in a Black Hawk to retain her flight status and pay. She jumped on a flight to get the hours in and the aircraft was shot down. I was the division aircraft recovery officer, so I got the task of going out and picking up the pieces of the crash and determining the cause. I was also asked to recover as many body parts as possible since the medivac crew didn’t recover enough to ID all the personnel. At the site, I determined that the Black Hawk had been hit by a 20mm or higher round that went through the pilot’s window and exploded in the cockpit. The aircraft then hit the ground at over 160 knots and spread itself and its occupants over 300 yards. During the body parts recovery, I began walking the path from where the helicopter had first hit, when up ahead I saw something I had never seen my whole time in Saudi-flowers blooming. I went to check it out and came upon the area where my TI’s wife had died. The area where she had been was covered in small flowers. Nowhere else, just where she was. It was a strange and thought provoking sight. Something I will never forget.