Blonde or brunette? Red Sox or Yankees? David Lee Roth or Sammy Hagar? Tastes great or less filling? These are just a few examples of the many great, pressing moral issues of our time. Even in the aviation field we have an enduring example of a great divide: Airbus or Boeing? The topic recently came up on our forums and it was immediately clear that people have very distinct, and I daresay, unshakeable opinions of the two big aircraft manufacturers. Whether based on fact, opinion, hearsay, national pride, or just simply liking the way one looks over the other, people can be vehement in their defense of their choice and relentless in their attacks on the competition. With all of that in mind, I thought it would be interesting to write an article on the topic as it relates to our hobby. It just so happens that the Flight Simulator 2004 community has the perfect products to evaluate.

In the first part of our five part series I’ll look at one of the contenders in the widebody category of aircraft: the Simulation Software Workshop Airbus A310. All of the software developers in this and subsequent parts of this series have created ultra-high realistic simulations of their respective products. Please note that these articles are not exhaustive reviews of each product although we will certainly be looking at each aircraft in depth.

Originally, my intent was to do side-by-side comparisons of the products to allow for a direct comparison between the major features of each aircraft. However, the more I delved into the systems and features of each I realized that my intended approach was flawed. For the sake of continuity and focus I’ve elected to take each product in turn (randomly selected by a toss of the coin) and present them individually.

We will lead off with the SSW Airbus A310. A widebody aircraft that has been around since the early 80s, the A310 is a very close brother to the A300 aircraft introduced in 1974. While the A310 has many very interesting and modern design features, it is in fact not far removed from the competitors (Boeing) in functionality and design. It has a traditional yoke and is not flown by “proxy”, meaning that it is not a fly-by-wire aircraft like the A320. The A310 pioneered the use of composite materials in secondary structures and the aircraft comes in several variants, including passenger and pure freight models.

Be warned that the SSW A310 (or any of the aircraft featured in the other parts of this series) are not aircraft that you will be able to hop into and drive around the sky without having done some reading (trust me, I tried!). The SSW A310 comes with a multitude of individual PDF manuals (12 if my count is correct) that cover everything regarding the A310: auto-flight, ECAM, electrical, fuel, hydraulic, flight instruments, etc., The SSW product is unique in that it has attempted to replicate each and every system and sub-system down to the nth degree. In fact, the PDF manuals read much more like actual aircraft flight manuals than software manuals, which can be a mixed blessing. I suspect a novice user would sometimes find the highly technical manuals a bit overwhelming. Credit goes out to SSW though for putting everything in the manuals.

Being one to accept a challenge, I entered the A310 cockpit without even peeking at the manuals confident that with my good working knowledge of aircraft and systems that I would figure most things out on my own. After 50 minutes of unsuccessful attempts to get the APU started I relented and printed out the PDF checklist which certainly cleared up much of my confusion. SSW has written an excellent tutorial PDF that takes the new aspiring A310 pilot from a dark and cold cockpit through an entire flight to shut-down. It is essential reading and is laid out nicely, even using graphics to point out switch locations and features. 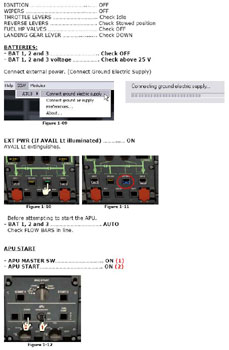 Moving on from the documentation I opened up the SSW A310 Load Manager. This is done prior to entering Flight Simulator and allows you to configure the aircraft to your liking, with one notable and glaring exception. You can choose the class layout (all economy, mixed first class, etc.,), where the passengers will sit, and the cargo loaded below in the cargo hold. Each movement of one variable changes the CG, ZFW (Zero-Fuel Weight), Gross Weight, and all of this is quite handily plotted in real time on a graph. The one disappointing omission is that you cannot click on the Fuel tab and simply load what fuel you desire, instead you have to import the fuel required from a saved flight plan. I would have preferred an easier way to just upload fuel and go. 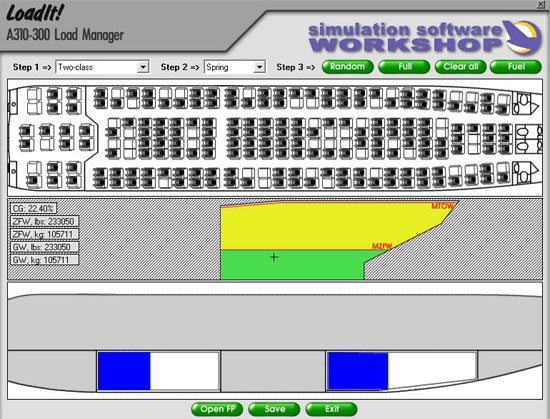 We have our aircraft loaded, now it’s time to fire up the sim! I have a very mid-range computer, so I run FS2004 with medium terrain, scenery and detail settings with the exception of the aircraft. Frame rates for the SSW product, and in fact all of the products, were outstanding. My first look at the A310 was very cool. 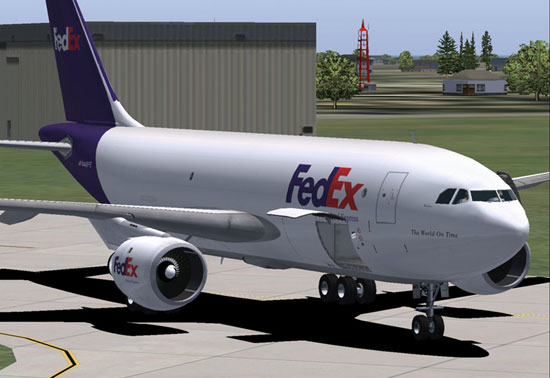 The 3D external model is just incredible. The paint, reflections and attention to detail far exceeded my expectations and I was instantly hooked. I have to admit a certain fondness in my heart for the “look” of the Airbus series of aircraft. With long, upright landing gear and those huge high-bypass turbofans slung under the wings, the A310 is a sexy critter. (Boeing fans will be happy to know the 757 is my all time favorite however!)