Stepping into the cockpit we get the first look at “the office”. SSW did an outstanding job on the 2D cockpit. Cold and dark the A310 looks like a very modern flight deck; you can tell immediately that the Airbus is a techno-nerd’s dream. 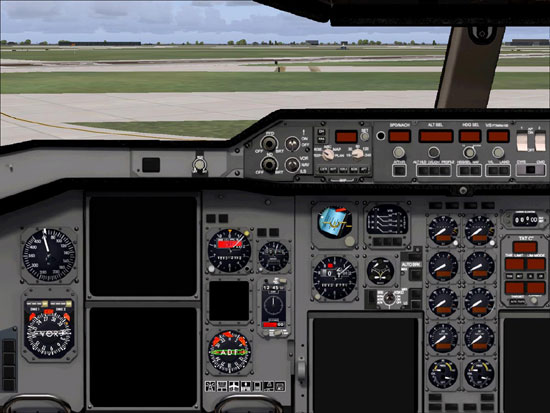 Small, intuitive icons at the bottom of the panel pop up the many panels and views that are necessary to fly the A310. Selecting the overhead panel I grin when the massive panel appears on my monitor. Now THIS is going to be fun! 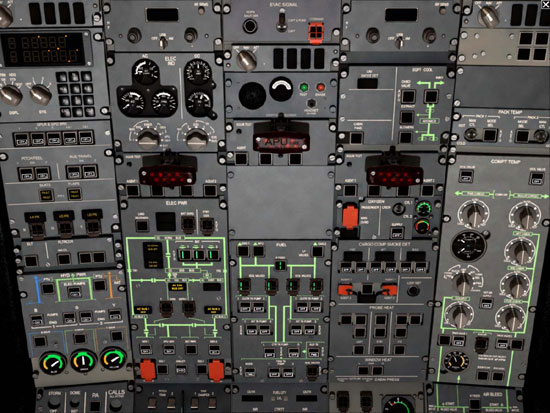 Airbus uses an incredibly functional and useful panel configuration and labeling system that is very intuitive to use. Many of the hydraulic, pneumatic (pressurization), fuel, and electrical systems are arranged so that switches and knobs fall in line with the system schematic drawn on the panel itself. Additionally, the toggle switches consist of white OFF annunciators that alternate to colored in-line indications representing flow directions. Most of the panel utilizes a “dark panel” concept which (back when it was introduced) was a large shift in how pilots were informed of the status of aircraft systems. Prior to modern aircraft if a switch was on and functioning, either a light or an annunciator indicated the state of the system. Modern aircraft elect not to distract the pilot with information he doesn’t need by remaining dark and silent if the system is on and functioning properly.

In the above screenshot, I have the 3 main batteries powering all the aircraft busses. With so much power draw (in any aircraft) battery life is extremely limited. In the Citation V I fly we have only 1 battery and if all the avionics are running it will last approximately 8 minutes before it is dead. So we need juice to power our aircraft and we get that either by hooking up to external power, which you can request via the SSW menu at the top of the Flight Simulator window, or you can fire up the Auxiliary Power Unit (APU) to provide electricity and airflow to the cockpit and cabin.

First I need to turn on one of the outer-tank fuel pumps to provide fuel to the APU. This was one of the steps I was missing in my abortive first attempt to fly the Airbus without having read the manuals or checklists! You can readily see via the fuel flow diagram how if you don’t have at least one low pressure pump running then fuel can’t be forced to the APU (follow the green lines!). 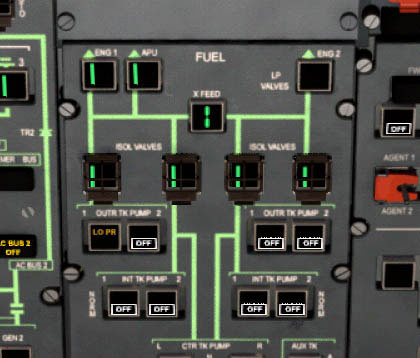 Opening the other secondary overhead panel shows us a host of other controls and following the checklist I select the APU Master Switch ON and press the start button. The blue ACCEL light illuminates indicating the APU is spinning up.

Down in the cockpit the aircraft assumes (correctly) that if I’m starting up the APU then I’ll also want to monitor the APU page on the ECAM display (Electronic Centralized Aircraft Monitor) to make sure that the temperature, RPM and power output are normal. Once the APU is up and running it is providing electrical power to the aircraft, so I don’t have to fret about draining the aircraft batteries (which WILL happen in the SSW Airbus if you sit there and fumble around too long!)

With electrical power available the cockpit comes to life, things start humming and displays start glowing, confirming that this indeed is an aircraft intent on flight. Dominating the cockpit are the 2 EFIS tubes on the left and the 2 ECAM tubes on the right. The far right ECAM tube is swappable with the one on the left, so any data that appears on that “half” tube can be flip-flopped so that the data is viewable in full. The ECAM system is much like a baby-sitter for the pilots. The system watches over you, shows you what is going on, and if you do something wrong, it tells you and gently suggests corrective action. Ok, maybe it’s more like a wife (or husband!).

In this picture the EFIS tubes are on, but not really functioning because a hundred other parameters (slight exaggeration) haven’t been met yet. The ECAM is showing the DOOR page indicating that the forward and aft cargo doors are still open as well as the forward and aft passenger doors. 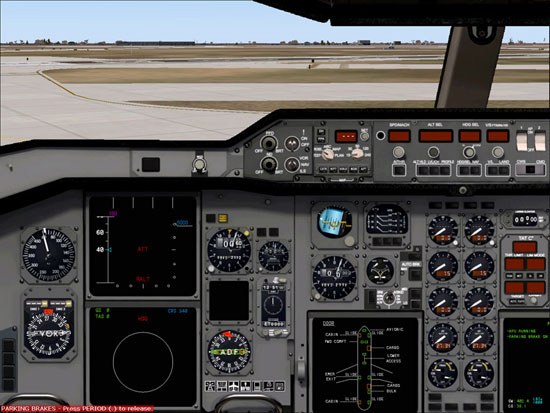