In response to my hand-flying the aircraft down the ILS the Airbus hurls an insult at me, calling me a RETARD. Oh, actually that is the aircraft telling me that I’m in LAND mode and that I need to RETARD the throttle to idle for the flare. I thought the French were getting a bit spiky with me! Mon erreur mon ami! 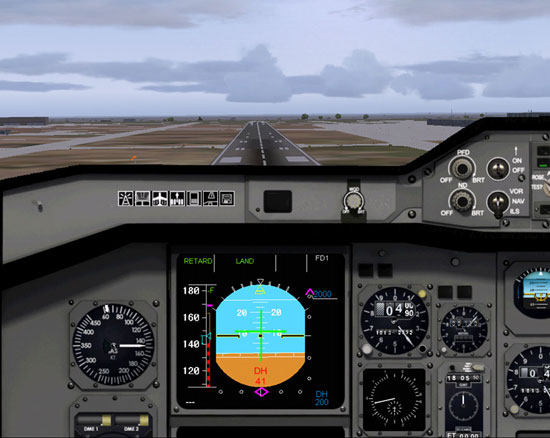 With the throttle at idle and the aircraft in a nose high pitch attitude the mains kiss the runway in a puff of blue smoke. 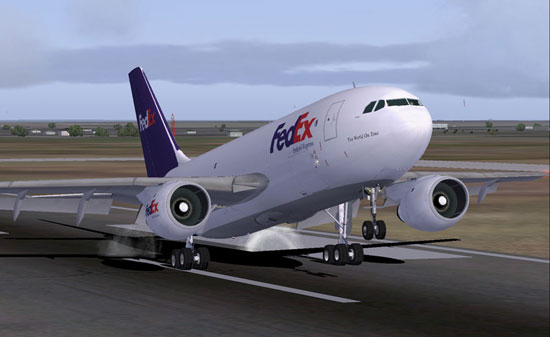 The slats and speedbrakes deploy automatically to aid in aerodynamic braking and dumping the lift from the wings. Meanwhile I select reverse thrust and the engine cowlings slide forward and the engines roar from the effort. 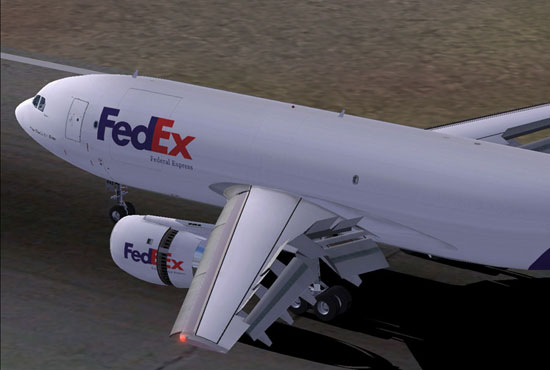 Upon touchdown the ECAM page automatically switches to the brake temperature/tire pressure and spoiler position indicator page to display wheel brake temperatures in case any overheating has occurred. I only lightly tapped the brakes at the end of roll-out instead relying on the reverse thrust to slow me, so I’m not sure if those numbers actually rise dramatically under heavy braking (auto or manual). Already being familiar with the thoroughness of the SSW modeling though, I suspect one would see yellow temperature warnings in the event of an aborted takeoff. 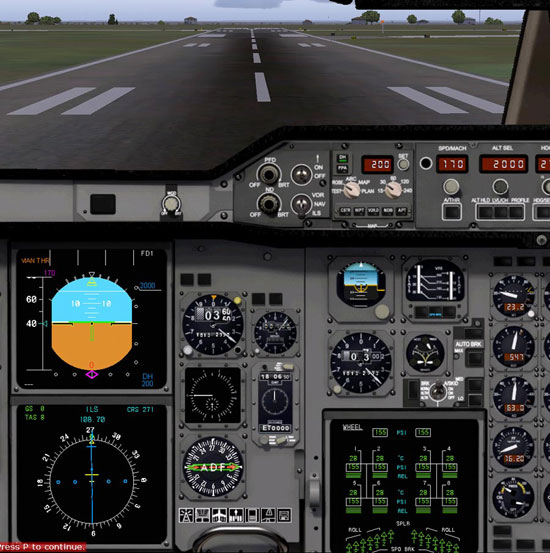 Taxiing over to the FedEx ramp I’m soon parked in a slot. I start the APU to provide electrical power for the “house-keeping” after the flight and I shut the main engines down. The ECAM FUEL page shows my fuel remaining and on my short 563 nm hop from Charleston I’ve burned about 25,000 pounds of fuel.

Opening the lower cargo doors and main entry door the FedEx employees get busy unloading the freight and getting the airplane ready for the next flight! 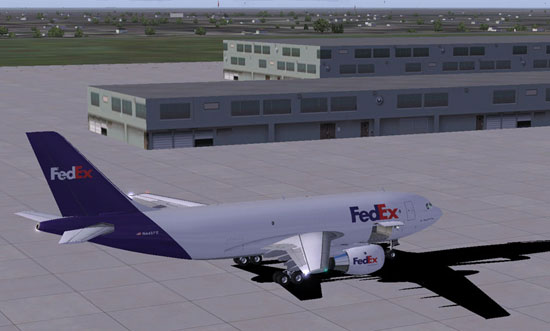 The SSW A310 is a really incredible package. It successfully attempts to faithfully replicate somewhere near 80% of the real aircraft systems and it does so with excruciating attention to detail. As with any product that strives to be so complete there are some bugs and it appears that the SSW team is a very small and “task saturated” company. There have been some criticisms of outdated NAV data and other issues but they have also addressed many of the concerns with the A310, and overall I think the product is an outstanding tool for people interested in a very complex replication of the real Airbus A310. The thousands of incredible features should not be overshadowed by the very few relatively minor glitches (none of which I feel are “show-stoppers”).

As for what I think of Airbus (unrelated to SSW) I think they have an outstanding aircraft in the A310 which is reflected in the popularity of the relatively old model to this date. I really like the panel layouts and the ECAM really is one of the most useful tools ever put in an aircraft. Everything about the Airbus-style cockpit lay-out oozes modern technology and as a certified button pushing nerd I have to admit I’m fascinated by the gee-whiz factor.

I have to confess that even though SSW modeled the FMC in extreme detail, I had trouble getting used to the input style and page formats. Being from corporate aviation I’m much more used to the non-airline oriented FMS styles by Universal (UNS1) and AlliedSignal (GNS-XLS). That said, practice with anything breeds familiarity and I’m sure once I experiment and <cough> read the manual my FMC knowledge will expand by leaps and bounds! Since the FMC is really the heart of the navigation system for almost all modern airliners I feel I’ve done a disservice to SSW by not fully covering the FMC implementation in their product. In all honesty though, an entire article could be written on how an FMC functions, so we’ll leave it at that.